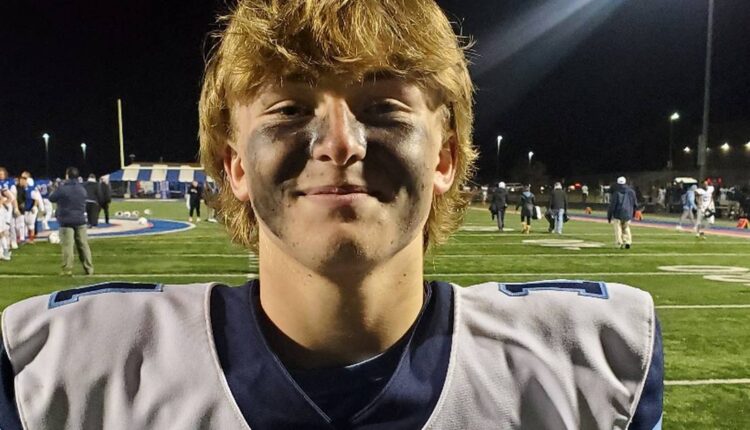 LAGRANGE PARK – When looking at Logan Malachuk, it can be very easy to forget that he’s only a sophomore.

The way he carries himself, the level of maturity and, of course, his high level of play at the quarterback position for Nazareth well exceeds the expectation for a 16-year-old.

Malachuk continued that maturity in a sensational performance Sautrday against Rockford Boylan in the second round of the Class 5A playoffs, as he threw for three touchdowns and ran for another in a dominant 38-13 victory.

The win was the sixth straight for Nazareth (7-4) after just one win over its first five games to begin the season.

“It’s just our mindset that now that the regular season is over, every team is 0-0,” said Malacuk, who finished the day with 154 yards through the air. “That’s the mindset you have to have. It doesn’t matter that we were 5-4, what matters is that we’re 2-0 and heading deeper into the playoffs.”

Both teams struggled to throw the ball with high speed winds blowing through most of Saturday afternoon’s contest, but it was Malachuk that found fellow sophomore Jimmy Penley for a 65-yard catch and run for the game’s opening score.

Though Boylan (9-2) answered with a touchdown run by Mekhi Glover at the 2:50 mark of the first quarter, it was another connection between Malachuk and Penley – for a 13-yard touchdown – late in the second quarter that gave the Roadrunners a lead they’d never relinquish.

“We’ve played youth ball together for so many years that this is just evidence of that connection we have,” Penley said. “The chemistry on this entire team is just special. Coach [Tim Racki] has really instilled a mindset in us that we all buy into. We knew we had a tough schedule to begin this season, but we knew if we stuck together, we’d be fine.”

Malachuk’s superb first half continued moments later as he noticed a blitz from both Boylan linebackers that left the middle of the field wide open. The sophomore signal-caller snuck through the Titans defense with nothing but green grass ahead of him for a 28-yard rushing score that gave the Roadrunners a two-score advantage at halftime.

Boylan came out of the break with two turnovers on his first five offensive plays, including an interception by Nazareth’s Lesroy Tittle that was returned 35 yards for a touchdown.

For a group that has seen several successful teams come before it, the Nazareth team had to have the trust in Racki and his plan despite the slow start record-wise.

“Our goal every year is five, six, seven, eight or nine [wins],” Racki said. “We feel if we can allow ourselves to get in [to the playoffs] and get healthy through a tough conference schedule, that we feel good about our chances.

“Logan plays a position that’s going to have everyone watching, but he handles that pressure so well. It’s very easy to forget that he’s only a sophomore and even though he led us into the playoffs last year, it’s still a growth process. He’s a great teammate, he’s continued to get better each week and he’s in a very good atmosphere with a lot of support around him.”

Malachuk found Eddie McClain for a 4-yard touchdown catch for his final contribution to Saturday’s win in the final minute of the third quarter. Malachuk’s next test will be against another one-loss team at Morgan Park (10-1) in the 5A quarterfinals next weekend.

Boylan’s Rasheed Johnson scored late in the game on a 93-yard touchdown run. The Titans managed just 41 yards through the air.