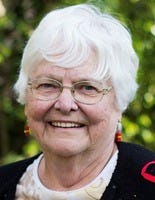 Marilyn was born at home in Stillman Valley, IL on January 4, 1935, to Eno and Gladys (Lutzow) Wiltfang. She graduated from Stillman Valley High School in 1951 and married classmate Davy Duhigg on December 17, 1954.

In 1952, Marilyn attended the Rockford School of Beauty Culture and worked as a hairdresser for the next 25 years. During this time, she was a freelance reporter for the Rockford Morning Star, Ogle County Life, and WRFL Rochelle Radio. She then went to work for the US Postal Service, starting her career as a clerk in Stillman Valley, followed by a promotion as a domicile clerk for the Postal Inspection Service. She was appointed as Postmaster of Chana, IL, Lena, IL, and retired as Postmaster of Galena, IL. She went back to work as the director of the Jo Daviess County Senior Center in Galena, IL. In 1994, Marilyn and Davy moved to the Naples – Ft. Myers, FL area where they worked as licensed condominium managers. Together they managed The Towers Condominiums, The Commodore Club, The Stratford, and The Contessa.

In Stillman Valley, Marilyn served as a leader for the Girl Scouts, Boy Scouts, and 4-H. She was elected to the Stillman Valley School Board and as Ogle County Tax Assessor. She was an avid Rotarian of the Rotary Club of Galena, IL and Naples North chapter in Florida. Marilyn was an active member of the National Association of Postmasters of the US (NAPUS), holding numerous offices in the organization. In Florida, she was a member and editor for Building Managers International.

She thoroughly enjoyed attending the NAPUS conventions and the people and places she was able to meet through her involvement. She was most proud of her appointment as the editor of the national magazine for the organization, where she had the opportunity to interview the US Postmaster General and attend the International Postal Union Conference. She loved to bake delicious desserts, go out to eat, and watch golf and game shows on TV.

She was preceded in death by her husband Davy and her parents.

Cremation rites have been accorded and a private interment will be held at Stillman Valley Cemetery at a later date. Memorials may be made in Marilyn’s name to the Girl Scouts of Northern Illinois.

The Art Of Writing & Speaking The English Language : Introduction — The Methods of Masters