Minnesota QB Tanner Morgan carted off in loss to Illinois 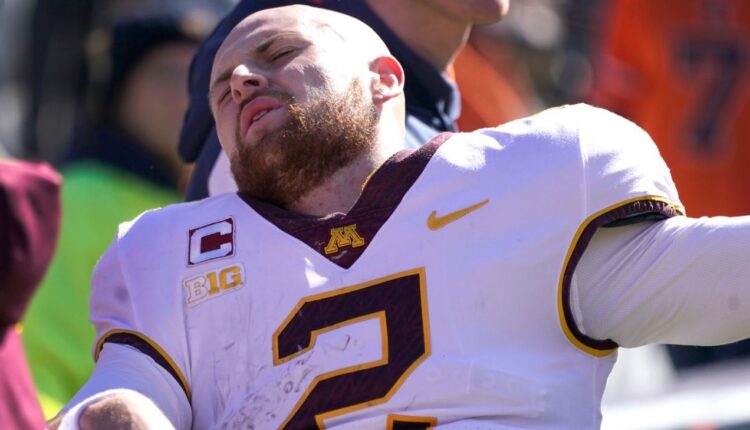 Minnesota senior quarterback Tanner Morgan was carted to the locker room after sustaining a blow to the helmet early in the fourth quarter of the Golden Gophers’ 26-14 loss at Illinois.

Illini freshman linebacker Gabe Jacas hit Morgan on the side of the helmet as Morgan ran for a first down with 12 minutes left in regulation and Illinois leading the Golden Gophers 23-14.

Morgan will be evaluated at a Champaign, Illinois, hospital for an upper-body injury before the team heads home to Minneapolis, Gophers’ coach PJ Fleck told Minneapolis radio station KFAN in a postgame interview.

Fleck said that Morgan was alert while being transported to the hospital, and that Morgan’s wife, mother and athletic director Mark Coyle accompanied him.

Fleck said Morgan is a “tough kid” and that the Gophers sideline quickly gathered around him out of concern.

“We all kind of saw that,” Fleck said. “Everybody ran on the field. When you kind of get your hands pinned down and then you get driven into the turf, that’s hard.”

Morgan is the winningest quarterback in Minnesota program history, with 31 victories, and the sixth-year senior has thrown for 1,164 yards and 11 touchdowns this season.

Illinois limited Morgan to 4-of-12 passing for 21 yards and an interception Saturday, and redshirt freshman Athan Kaliakmanis finished things out in his absence.

The Associated Press contributed to this report.