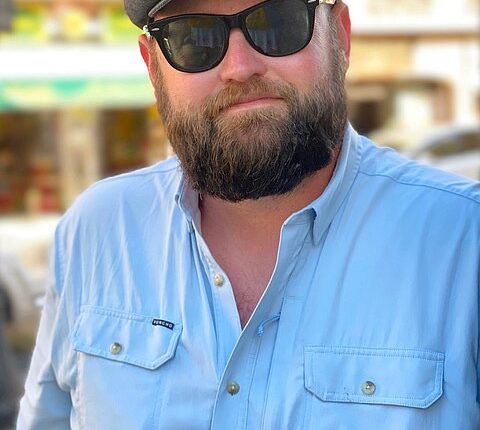 The regular open mic session for all poets, musicians, and storytellers will begin at 6:30 pm today. Hamm will begin his feature set at 7:15 pm, followed by another round of open mic. Admission is free and open to all ages. All are welcome.

Born in Bloomington, Illinois, Hamm, his wife Mel, and their two daughters live in Mexico, Missouri. Hamm has an MFA in Creative Writing from Southern Illinois University Carbondale, a BS in English from MacMurray College, and additional graduate hours from the University of Missouri.

“I am an elementary librarian in Mexico; I strum a ukulele and read to first-graders professionally. It’s a pretty great gig,” Hamm said in a news release.

“I once allowed students to choose my beard style after they accomplished a reading challenge and ended up with a monkey tail (look it up). I’m also a photographer, a poet of course, the host of Around the Campfire online reading series “In addition, I make collages and strum the ukulele now and then. I’ve been with my wife, Mel, for 22 years — married for 17. She’s a teacher of gifted students in our school district. I have two daughters. Abbey is 13 and already an established actress and singer. Sophie is 9 and has won her class award for most caring classmate several years in a row. We’ve also got two dogs. Bear is a 115-pound black lab and Mac, a rescue, is 80 pounds of cuddle,” Hamm said.

“I’m the author of four poetry collections, two poetry chapbooks, and a book of photographs. My most recent book is ‘Drinking Guinness With the Dead: Poems 2007-2021’ (Spartan Press 2022). My work, visual and written , has appeared in Nimrod International Journal, River Styx, Sugar House Review, Southern Indiana Review, Midwest Quarterly, New Poems from the Midwest, and many other journals and anthologies.I was selected as a 2022 Woody Guthrie Poet and in the past I received the Stanley Hanks Memorial Poetry Prize as well as the Inkslinger Award from Buffalo Almanack.

“In 2019, my poem ‘Goodbye, Sancho Panza’ was studied by 50,000 students worldwide as a part of the World Scholar’s Cup curriculum. Later, the WSC flew me to Manila, Philippines, to deliver the keynote address for the Global Round there. My poetry/photography show Midwestern traveled galleries in the Midwest from 2019-2021, interrupted of course by COVID. I’ve read at numerous reading series, libraries, galleries, bookstores, writing conferences, pubs, concert venues, etc., over the years. Later this year, I’ll be performing poems as a TedX talk in Oshkosh, Wisconsin,” he said.

When asked about his poetry background, Hamm said, “I first started writing poems as a kid. There was a newspaper contest called Pegasus, and my poems appeared there often during elementary school. I wrote poems in notebooks throughout high school and college. I Tried fiction for a while, and went to graduate school for that, but came back to poems around the time my mother died and our first daughter was born in 2009. As a kid, I wrote to separate myself from everyone else back to poetry it was because I was, in some ways, a failed fiction writer who needed to write something to process my life.It turns out I was a poet all along.I write now because poetry is the lens through which I see the world. Some people practice religions and philosophies to guide their lives. I practice creativity. My writing is probably most identified with poems about the Midwest. I explore the region through characters, landscape, praise, and criticism. I also write a lot about family relative nships, different perceptions of masculinity. I have obsessions and themes of course, and I feel it is important to write about those, but at the end of the day I would write about anything.”

Wednesday Night Poetry was a “lifesaver for me during the height of the pandemic. I discovered it through social media and began to attend virtually. It gave me a creative gathering to look forward to weekly when everything else seemed shut down. I discovered many poets I admire through the virtual WNP and wrote several poems from my latest book in order to debut them on with that amazing community. The first poem in the book, ‘Gratitude for the Poets,’ was written specifically to all the poets at WNP,” Hamm said.

“What a thrill for us all to have another virtual WNP out-of-state poet coming to read in-person for Wednesday Night Poetry here in downtown Hot Springs. Justin is a great poet, a caring dad, and a good soul. I have long admired his work on the page and in the schools, opening up worlds of magic and imagination to the little ones.He recently read his poems at the Alhambra palace in Grenada, Spain, and now a couple of weeks later, he is here with our WNP family. I love how poetry joins worlds, and I can’t wait to share Justin with our local folks. Also, I hope he brings his ukulele,” WNP Host Kai Coggin said in the release.