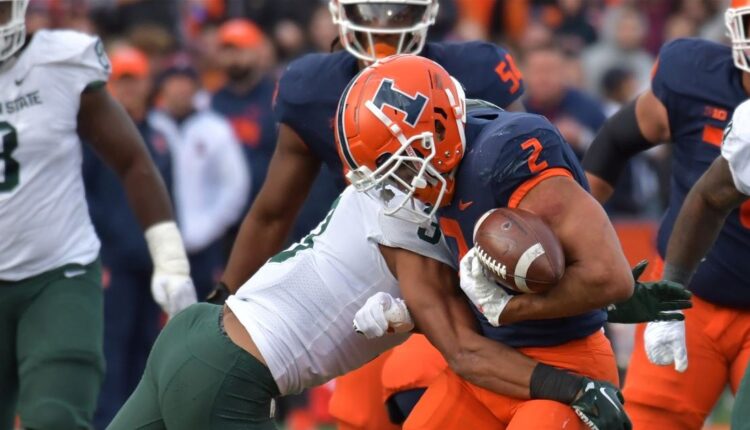 During a blustery afternoon at Memorial Stadium, the No. 16-ranked Illini in a 23-15 loss to Michigan State had similarly sloppy execution as its last loss, a 23-20 loss at Indiana more than two months ago.

In its first home loss of the season snapping a six-game win streak, Illinois (7-2, 4-2 Big Ten) — which is now 4-0 against Big Ten West opponents but 0-2 against Big Ten East opponents — turned it over on downs six times, failed to score on 3 of 4 red-zone opportunities (including a goal-line stop on its first drive) and had several special teams miscues, including two shanked punts by Hugh Robertson.

Payton Thorne was intercepted by Sydney Brown on his first pass of the game but was sensational the rest of the game, completing 19 of 28 passes for 182 yards and two touchdowns to lead Michigan State (4-5, 2-4 Big Ten). Jayden Reed had five receptions for 68 yards and a touchdown, and Jalen Berger ran for 81 yards and had three receptions for 29 yards.

Chase Brown rushed for 136 yards on 33 carries, his 10th straight game of 100-plus rushing yards, but he coughed up a fumble in Michigan State territory on a promising second-quarter drive and failed to convert on a 4th-and-2 at the Michigan State midway through the fourth quarter.

Tommy DeVito completed 25 of 37 passes for 288 yards and two touchdowns, but DeVito threw an incompletion on a fourth-and-goal at the Michigan State 1 on the opening drive and didn’t push the ball toward the end zone on the Illini’s final drive. Isaiah Williams led Illinois with five receptions for 98 yards and two touchdowns, a 60-yard catch and run and a 7-yard shovel pass.

After a Michigan State missed field goal with about a minute left, DeVito led a drive inside the Michigan State 30, but the drive ended on a Brian Hightower catch short of a first down as time expired.

What it means: Illinois football’s college football playoff dream is officially dead. Yet, despite another loss to a Big Ten East team, Illinois still leads the Big Ten West by a game after Purdue’s loss to Iowa, and with a win over Purdue next weekend in the home finale, the Illini can take a stranglehold on the Big Ten West with two games remaining — though potentially not clinch with Wisconsin, Minnesota and Iowa potentially still in the mix. The Big Ten Championship Game and New Year’s Six Bowl are still in play, but the Illini made things much tougher with its worst performance in two months.

Star of the game: Naperville native Payton Thorne was picked off on his first pass of the game, but he dominated after that. He managed the game extremely well as Michigan State really took advantage of the Illini’s aggression on well-executed screen passes and some down-field throws to Jayden Reed.

Stats of the game

Don’t overlook: The red-zone offense continues to be a problem as Illinois stalled in the red zone three times, including once at the goal line. That area has been a weak spot for Illinois offensive coordinator Barry Lunney Jr. During the last four games, Illinois has four touchdowns in 16 red-zone opportunities.

Special teams cost Illinois. Punter Hugh Robertson had a terrible game. He punted 20 yards into the wind and then punted a line drive into his line with the wind at his back.

What’s next: Illinois hosts Purdue (5-4, 3-3 Big Ten) on Saturday (game time TBA) with the chance to take a huge step toward winning the Big Ten West title and a spot in the Big Ten Championship Game on Dec . 2 in Indianapolis. Purdue has won five of six against Illinois and 13 of the last 17 against the Illini, including a 13-9 win at West Lafayette last season.

Rockford Lutheran paints a victorious picture in win over…