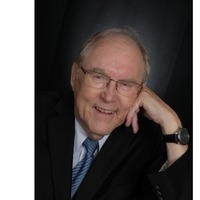 Dale was born on July 16, 1939 to Erma and Edgar Leland in Albert Lea, MN. After Dale graduated from Bricelyn Public High School in 1957, he worked as a mechanic, and then attended Arizona State University for a year. He later graduated from Brown Institute and went on to work as a computer engineer.

In 1967, Dale met Margaret Ball at the Peter Stuyvesant Room in Buffalo, NY. They married later that year. Afterwards, Dale worked as an engineer in Chicago, Minneapolis, and East Peoria, Illinois, in his early career, and later worked with his wife at Best Buy Headquarters in Richfield.

Dale was predeceased by his wife, his brother, David Leland and his wife Wilma, and his parents. He is survived by his sister Barb Leland, his three daughters, Amy Crary (Kevin), Suzanne Brandenburg (Daniel), and Jeanette Dias (Christopher); and four grandchildren, Julia and Victoria Crary, Max Brandenburg, and Madeline Dias.

Visitation will be held at Prince of Peace Lutheran Church in Burnsville, MN at 10:00AM on October 18, followed by service at 11:00AM. Burial will take place in Bricelyn Cemetery in Bricelyn, MN at noon on October 19. In lieu of flowers, the family requests donations be made to the Mayo Clinic: https://philanthropy.mayoclinic.org/donateMC.

Visitation one hour prior