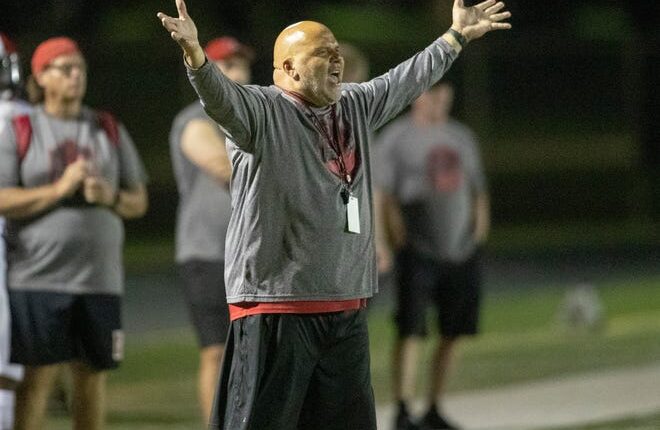 Here are our high school sports writers’ predictions for Rockford-area football teams in Week 4 of the high school football season.

The Rockford Register Star’s Matt Trowbridge (4-2 last week, 20-4 on the year) and Jay Taft (8-2 last week, 30-6 overall) will break down games involving area teams out of the NIC-10 and Interstate 8 (Trowbridge) and from the Big Northern Conference and NUIC (Taft), and give you their picks each week.

Boylan (3-1) at Auburn (1-3): Something has to give. No one has played more lopsided games than Boylan, which has easily scored the most points in the conference and also allowed the fewest, outscoring teams 200-44. Every Auburn game, on the other hand, has been decided by nine points or fewer. But after seeing East run for 189 yards against Auburn in the first half alone last week, it’s hard to see the Knights slowing down the Titans in a game with the unusual starting time of 4:45 pm Boylan 35, Auburn 14.

East (2-2) at Hononegah (4-0): Little has come easy for Hononegah this year. Hono’s only 20-point win came in a game it trailed Freeport 22-14 at the half. Part of that is because Hononegah’s run game isn’t as dominant as usual; Quarterback Cole Warren leads the team with an average of 54 yards on the ground. But Hononegah has a better passing game (Warren has 584 yards and 8 TDs) and better special teams. 28 Hononegah, East 12.

Belvidere North (4-0) at Belvidere (0-4): North should continue to dominate this crosstown rivalry in its bid to win its first-ever outright NIC-10 title. The Blue Thunder share the title with Hononegah with 8-1 records in 2014. Belvidere North 49, Belvidere 7.

Freeport (1-3) at Harlem (2-2): Freeport’s offense has come mostly in chunks this year. Dedric Macon passed, caught and returned TDs covering 33, 55 and 52 yards to give Freeport a 22-14 halftime lead over Hononegah last week. But that was all the Pretzels scored. Harlem has done the same on defense, giving up yards grudgingly except for several big plays a game. If Freeport can’t control the ball, the Pretzels — who play several players both ways — tend to wear down late. Harlem 28, Freeport 21.

Jefferson (0-4) at Guilford (3-1). The J-Hawks have been up and down, playing tough in a 13-point loss to undefeated Hononegah and a nine-point defeat to Harlem, but getting crushed by 64 points to Boylan and 39 to Belvidere North. Guilford has been strong every week. Quarterback Sebastian Bracius (554 yards) and receivers Tyler Gaines (215 yards), Nick James (176), Jeremiah Fricks (102) and Randy Johnson (97) give Jefferson a passing chance, but Guilford is too good and too physical. Guilford 35, Jefferson 20.

‘Why get cute?’:How the simplest play in football earned East its win over Auburn

Sycamore (4-0) at Rochelle (4-0): This crossover game between the league’s two divisions is a wake-up call for Rochelle, which has been trampling the JV portion of its schedule, averaging 433 yards rushing and 11.1 yards per carry. But those four teams are a combined 3-13 on the season and have an average enrollment of 712. Now comes Sycamore, which is undefeated, ranked No. 4 in Class 5A, has 1,209 students and has routed a pair of teams that have lost to no one else and average 1,500 students in DeKalb and Ottawa. Elijah Meier was 9-of-9 passing for 181 yards and four TDs for Sycamore last week and the Spartans also had 284 yards rushing. I will go with the balanced offense over the run-only team. Sycamore 35, Rochelle 21.

Byron (3-1) at North Boone (1-3): If North Boone is going to make a run at making the playoffs for the fourth postseason in a row, it will need to either knock off Byron this week or undefeated Stillman Valley next. Tough tasks for a team that has only been able to muster a win over Rockford Christian last week. That was a pretty impressive win, however, and QB Chandler Alderman seems to be getting on track. But, not enough. Byron 32, North Boone 22.

Dixon (3-1) at Winnebago (2-2): Winnebago has a real chance to turn its season around this week, but Dixon will be looking to bounce back from its first setback of the year. It got pounded 36-6 by Stillman Valley last week, so will that be a wake-up call or a blueprint for how to beat this year’s Dixon team? If Winnebago can keep it close, it could have a shot at the end. Or Dixon might just be too hungry. Dixon 34, Winnebago 30.

Oregon (1-3) at Lutheran (2-2): Lutheran bounced back last week after back-to-back losses, and this is another chance for the Crusaders to show whether they are for real this season or not. This is a huge game for both of their playoff chances. QB Kyng Hughes wants to step up for Lutheran. Lutheran 28, Oregon 24.

Fulton (3-1) at Lena Winslow (4-0): Can you say “Statement game?” Well, I believe Le-Win can. The Panthers have another stable of running backs, led by Gage Dunker, Gunar Lobdell and Ethan Fye, and they will run free this Friday night. Le-Win 55, Fulton 20.

Durand/Pecatonica (3-1) at Knoxville (4-0): Knoxville of the Lincoln Trail Conference has handed two teams their only losses of the season so far, and is outscoring its opponents 165-77 so far. This is the first of three strong foes in Du/Pec’s way, and with Dakota and Le-Win waiting in the wings, the Rivermen need this one. Du/Pec 33, Knoxville 20.

Galena (2-2) at Forreston (2-2): Forreston has to be looking at this as a must-win game for its playoff hopes, so the Cardinals should be focused and well prepared for this one. Forreston 29, Galena 26

West Carroll (0-4) at Stockton (1-3): Stockton, which has had a rough start to the season, is licking its chops for this one. This is a chance for Stockton to gain some confidence. 46 Stockton, 6 West Carroll

Expanding hospital-based innovation hubs to promote ‘what if’ solutions