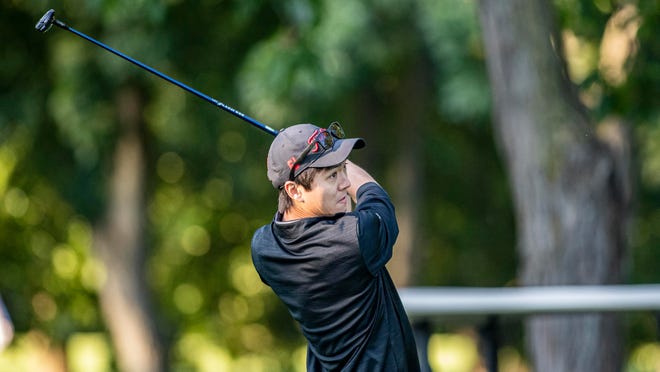 Dofflemyer shot 70-69—139 to finish 3-under-par at Macktown and edge Justin Christiansen (70-70—140) by one stroke and TJ Baker (69-72—141) by two to win his 11th local title. That moves him past eight-time former men’s champion Alex Welsh and former State Am champ Dick Jungs for seventh all-time.

Dofflemyer is also only the sixth local golfer to win both the Men’s City and the County Am twice each.

“That’s pretty cool. I didn’t realize that myself,” said Dofflemyer, who said the two tourneys test different parts of your game. “Macktown is a shorter course that relies more on hitting fairways and being able to convert birdie chances vs. the City tournament, where it’s more of a grind, playing four days on four courses.”

Get out there:Here are 5 golf courses worth the drive from the Rockford area

Tournament fields have shrunk since the days the Men’s City and County Am drew fields sold-out fields of well over 200 golfers 30 years ago. Now, only Rockford’s senior tournaments are as large as the County, which drew 90 men over the weekend.

Macktown’s short length (5,756 yards), the tournament format of letting golfers pick their own foursomes and play together at the same times both days and the affordable $85 entry fee ($75 for senior divisions) all help the tourney draw more non-star golfers. Forty-three of the 90 golfers shot 81 or higher on Saturday’s opening day.

Those are the type of golfers who don’t play much tourney golf any more, but who tourneys would like to lure back.

“It’s definitely important,” tournament manager Rich Rosenstiel said. “Tournament golf in general is hurting. We have two people in the field who are in their 40s. That entire demographic isn’t playing much tournament golf. We need to figure out how to get them back on the course.”

Jeff Bushnell and Matt Marinaro were the two 40-somethings who played.

“I think it is very important to spread the game of golf and open it up to everybody,” said Marinaro, who shot 70-73—143 to tie for fourth. “I am a very golf-oriented guy and I love the fact that people are involved because the numbers are way down. Whoever you can get out is great for our community, our towns.”

Kyle Rhymer, who edged his defending champion twin brother, Cody, by a stroke to tie Marinaro for fourth, played with his brother and two close friends. One of those friends was playing in his first tournament.

“You get to play with your buddies,” Kyle Rhymer said. “It’s not as serious. It’s a fun environment while still being competition. It’s stressful, but less stressful than a standard golf tournament. That’s what brings people out who might not play in another event because of how serious it is. And that is exactly what they need to bring out, that middle class.”

Dofflemyer keeps moving quietly into a higher class. He won his first Men’s City title in 2013 at age 17, the youngest champion in history. But he didn’t really hit his groove until he graduated from college and started working as an air traffic controller. He has won seven of 17 tournaments the last four years, normally with either his mom or his wife, both star golfers themselves, as his caddy. Baker, with three wins, is the only other golfer with more than two titles the last four years.

“Having to work as well as playing golf on the side, vs. back in high school and college, where golf was the main thing I did, it gives me a new appreciation for being able to play in these tournaments,” Dofflemyer said.

Ben the Border Collie:Rockford’s top golf course had a goose problem. Then a dog showed up

Baker held the lead Sunday before driving out of bounds on No. 10 and taking a triple bogey.

“I had the driver, but I put it back in the bag, pulled out 3-wood and snapped it left OB,” Baker said. “That triple bogey kind of got to me. I was protecting against going left on the next two holes and flew it right into the trees and made a couple of bogeys. My advantage is usually off the tee. When I do something like that, it is very frustrating.”

Baker rallied with an eagle on No. 13, but could never catch Dofflemyer again.

“He’s been on an amazing run,” Rhymer said. “I expect him to continue that run as long as he is in Rockford.”

“People don’t know how good Robert is,” Marinaro said, “because he is a better person than he is a golfer. People don’t talk about his golf. They talk about how great of a guy he is. His golf game goes a little under the radar.”

And the County should have at least one more 40-something golfer next year. Mike Morig, who tied for 10th at 3-over 145, is 39 and expecting his second child in August. He said young parents “are the ones busy on weekends” who can’t play, but not him.

“I negotiated that before I got married,” he said with a smile, “so I am good to go for the County.”