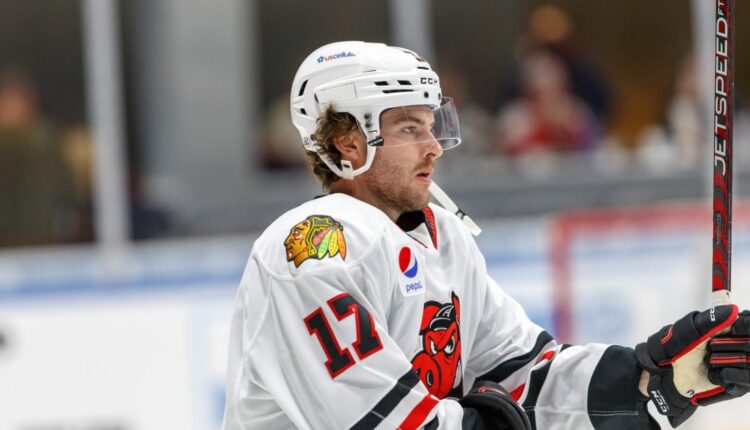 SPRINGFIELD, Mass.
… The American Hockey League announced today that Rockford IceHogs forward David Gust has been selected as the Howie’s Hockey Tape/AHL Player of the Week
for the period ending October 30, 2022.

Gust tallied two goals and five assists for seven points in two games to help the IceHogs to a pair of weekend victories.

On Friday evening, Gust scored twice and added three assists to set a career high with five points – the most by an IceHogs skater in more than seven years – as Rockford snapped a three-game losing skid by defeating Chicago, 5-3. Then on Saturday, Gust assisted on two of the IceHogs’ four power-play goals in an 8-2 win over visiting Belleville.

Gust has totaled three goals and eight assists for 11 points – one off the AHL scoring lead – in six games this season for Rockford. A native of Orland Park, Ill., Gust joined the IceHogs as a free agent on July 22, 2022, after winning a Calder Cup championship with Chicago last season. The sixth-year pro has played 258 career games in the AHL with Rockford, Chicago, Charlotte and Bakersfield, tallying 63 goals and 76 assists for 139 points.

Ring the bell! School’s in Session on Wednesday, Nov. 2 vs. Admirals
Join the Rockford IceHogs on the School Day Game Wednesday, Nov 2 against the Milwaukee Admirals at 10:30 am Hang out with the IceHogs and watch the Admirals get schooled! Buy School Day Tickets Here!