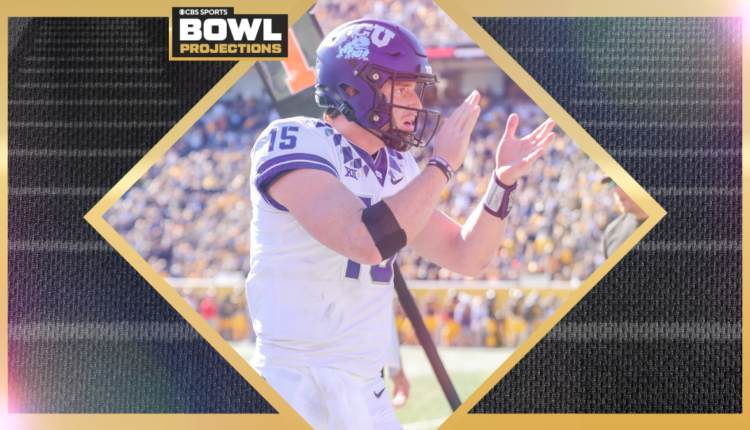 As usual, there were several surprising results Saturday, but none was more shocking than Kansas State beating Oklahoma State, 48-0. The fact that the Wildcats won isn’t terribly surprising as they are a good team and were playing at home … but 48-0?!

Oklahoma State has been projected into the Sugar Bowl for some time as the Big 12 champion, and while that could still happen, TCU now replaces the Cowboys in the Sugar Bowl as part of these projections.

This despite the Horned Frogs not being projected to remain undefeated. An undefeated Power Five team is unlikely to be left out of the College Football Playoff, which holds true in this projection as I have the Horned Frogs losing at Texas next week but still winning the conference.

Speaking of the College Football Playoff, it looked for three-and-a-half quarters like a change might be needed for that projection as well. However, Ohio State’s explosive offense finally went off in the middle of the fourth quarter, and the Buckeyes prevailed at Penn State, 44-31.

Georgia and Tennessee each had easy wins over Florida and Kentucky, respectively, ahead of their big showdown between the hedges next Saturday.

It looks like the Orange Bowl will not get a team ranked high from the ACC this season unless someone beats Clemson. Wake Forest will take a beating in the rankings this week after turning the ball over eight times in a loss at Louisville. The Demon Deacons threw interceptions that were returned for touchdowns on the first and last plays of the third quarter, yet somehow found time for four more turnovers between those pick sixes.

North Carolina figures to be no better than a middle-of-the-top-25 team if it wins the division but loses the ACC Championship Game to Clemson. The Tar Heels had a comfortable win at home over Pittsburgh. North Carolina plays at Wake Forest on Nov. 12 in a game that will probably determine the Orange Bowl participant from the ACC if Clemson wins out. Syracuse is part of this picture, too, despite taking its second loss of the season against Notre Dame. The Orangemen also travel to the Demon Decons on Nov 19.

Cincinnati lost at UCF for its defeat second of the season. It is looking more likely that the Group of Five representative in the Cotton Bowl will be unranked by the time the end of the season rolls around.

Tulane and Coastal Carolina are the last Group of Five teams with just one loss. The Green Wave, which won at Kansas State but lost at home to Southern Miss, still has games left vs. UCF and at Cincinnati. The Chanticleers, which lost to Old Dominion, still have games vs. Appalachian State and at James Madison.

In the Big Ten, muddled behind the top three, I swapped Illinois into the Citrus Bowl in place of Purdue. Assuming both teams win in Week 10, the Illini figure to be as much as a touchdown favorite over the Boilermakers when they face off in Champaign, Illinois, the following week.

That change caused a shuffle in the projections of the Big Ten teams right below that. I could not do a straight swap for Purdue into the Music City Bowl because the Boilermakers cannot go to that game due to the Big Ten’s no-repeat rule.

Before last week’s games, I said it was unlikely that any team in the Big Ten West would win out from then forward. So far, five of the seven have already lost. Illinois still plays at Michigan. Wisconsin may be favored in the rest of their games, but I still think the Badgers will still likely lose one.

There are currently 36 bowl-eligible teams, so we still need 46 more to fill all the bowl spots. This week’s projection comes up seven short of that number.

Akron became the first team to be eliminated from a possible bowl game when the Zips lost at home to Miami (OH).

Don’t see your team? Check out the rest of Jerry Palm’s bowl projections after Week 9 as well as the updated 2022-23 bowl eligibility tracker.