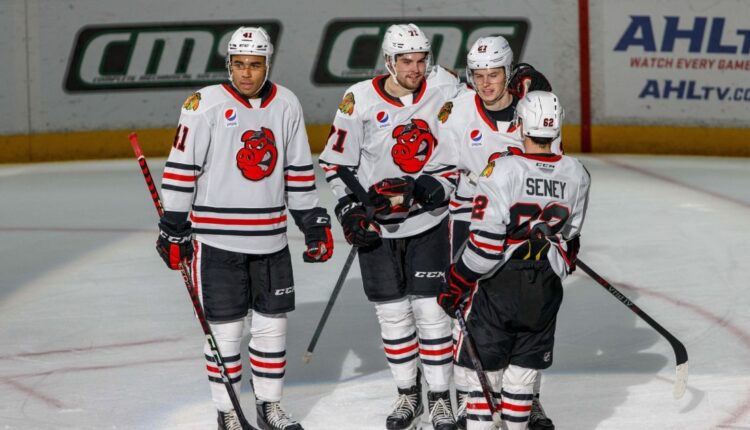 Rockford, Ill. — In their second-highest scoring game of the campaign, the Rockford IceHogs offense stayed hot and dominated the Texas Stars in a 7-2 win after two, three-goal periods. Helping pace Rockford, forward Brett Seney tallied his eighth and ninth goals of the season and added two assists in the win.

Rockford’s offense overwhelmed Texas goaltenders Matthew Murray other Anton Khudobin with an onslaught of attacks in the first and final periods on Wednesday night. A trio of IceHogs lit the lamp in both frames to take a demanding 3-0 and later 7-2 win.

Striking first and notching his second tally on the young season, both against the Stars, forward Cole Guttman tossed a wrist shot from the right circle behind Murray at 1:24 to set the tone. Tallying his eighth goal of the season, Seney followed up at 3:26 with a shot from the high slot off a pass from the right dot from David Gust. defenseman Isaac Phillips notched his second tally of the campaign from the left circle with a wrister that sailed over Murray’s shoulder at 10:30 to seal the 3-0 lead heading into the first intermission and chasing Murray from the game.

Khudobin stepped in for Murray, but that didn’t slow the Hogs offense. Despite Texas forward Curtis McKenzie finding the back of the net at 3:24 to start the middle frame, the netminder change didn’t stop Gust from answering back by sinking a wrist shot in front of the crease behind Khudobin at 4:56 to restore the three-goal lead .

Heating up in the final period, Seney tapped the puck in off a blast from Dylan Sikura on the advantage at 9:48, before forward Luke Philp traipsed down the slot with a back-handed shot in behind Khudobin at 14:05, and forward Luke Reichel chipped in his seventh tally of the season at 16:17. Texas defenseman Alex Petrović knocked the second Stars goal of the night past IceHogs goalie Mitchell Weeks at 12:57, a short-handed tally, the fifth shortie the Hogs have allowed through 15 games.

Weeks faced 30 shots and turned away 28 to earn the win; Murray marked four saves and was tagged with the loss while Khudobin totaled 18 saves in relief.

Join the Rockford IceHogs on Friday, Nov. 25 for First Responders Night versus the Milwaukee Admirals at 7 pm The IceHogs will wear special first responder themed jerseys that will be auctioned off throughout the game on DASH via IceHogs.com or the IceHogs mobile app. A portion of the proceeds from the auction will benefit the Greg Lindmark Foundation. Buy First Responders Night tickets here!

Santa Claus is coming to town!