School canteens in Illinois are struggling with food insecurity 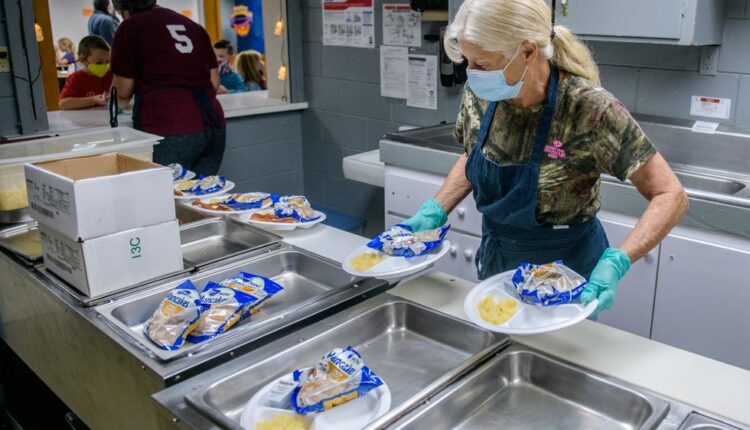 The food service director at the Tremont schools decided it was time to change the way she orders supplies on the day her supplier’s truck almost didn’t arrive in time for the staff to have lunch could prepare.

The main course of the day, Bosco sticks filled with mozzarella, are quick to prepare, but as time went on, Sonja Bolliger became increasingly concerned about not getting them ready in time for lunch.

Bolliger had always placed the weekly order with her supplier on Thursdays and in recent years it arrived like clockwork on Monday mornings. But this year everything was different.

“Since this fall, my weekly delivery has been showing up later and later each week, until about four weeks ago I only got the food I needed for lunch 20 minutes before lunch started. Two weeks earlier this week, I started ordering what I needed for the following Monday, ”said Bolliger.

With labor problems and food shortages disrupting the supply chain, school districts across the country reported numerous troubles this fall – and districts in central Illinois were not immune.

Administrators at East Peoria schools reported a shortage of staples for the cafeteria such as bottled water, chicken products and milk. In addition, deliveries were canceled due to a lack of drivers. In the 102nd School District in North Pekin-Marquette Heights, Superintendent Jennifer Lindsay said that sometimes sellers couldn’t deliver all of the items in an order. And Limestone Walters School District 316 has been shopping at various suppliers to get the things it needs, Superintendent Tim Dotson said.

Peoria public schools did not provide any information when asked if the district had any supply problems in their cafeterias.

A labor shortage appears to be the driving force behind the problem as factory, warehouse and dock workers stay at home with distance learning children or due to COVID fears, according to USA Today.

The labor shortage slows the production of food and a driver shortage slows the movement of goods across the country. The problem has gotten so severe that companies have started recruiting overseas drivers and asked President Joe Biden to ease immigration restrictions to make it easier for drivers to work in the U.S., Bloomberg said.

Fortunately, groceries aren’t the only place school districts get food. Government programs offer fresh fruit, meat, and cheese, and if necessary, Bolliger can make a homemade meal like tacos or chicken and noodles. Cooking from scratch is more complicated because it is difficult to gauge how many meals are served each day – they can run out or run out. Packaged products that cook quickly are definitely easier, but the Tremont school district has always served home-cooked meals at least once a week, Bolliger said. It has started doing it more often this year to ensure the meal of the day in uncertain times.

More:Hundreds of Peoria teachers and staff have not taken a COVID vaccine, the district says

That morning in mid-September when the delivery van was delayed, Bolliger panicked as the noon hour approached. The high school and middle school share a building in the Tremont district, where a total of around 900 children are enrolled – more than half of them are expecting a hot lunch.

“I have an app on my phone that tells me where my order is and it always said it was at the school they deliver before me and I called the company and they kept saying, ‘They will there be ’10 minutes, they are on their way,’ so I knew they would come. But I was preparing for my staff to cook a whole bunch of hamburgers and chickens because those are things I have on hand for emergencies, ”said Bolliger. “We prepared for it and the truck showed up. We told the driver what we needed and he unloaded it first so we could have lunch. ”

Ordering early fixed the problem today – but now Bolliger has to find a place to store the extra groceries.

“Your freezers and your fridges are just that big. Storage is a bigger problem than sourcing products, ”she said. “Fortunately, my kitchen is still pretty new. I have a very nice facility here, but I go to my elementary school, which has a 60-year-old kitchen and space is limited. Most of the time your things are kept here, except during the week they need them when I send them over. ”

In addition to the uncertainty about deliveries, Bolliger is also struggling with the lack of popular items such as chicken nuggets and bag snacks. She recently shopped at Walmart to find pretzels and was disappointed to find only nine bags.

“I bought them all. We split them into smaller bags. We serve pretzels with peanut butter. It’s a good, low-fat snack … I can’t find pretzels anywhere.”

Do you hate mammograms? Rockford Mercy has options.

KHN’s ‘What the Health?’: The Politics of Vaccine Mandates