The 10 Largest Universities In The United States 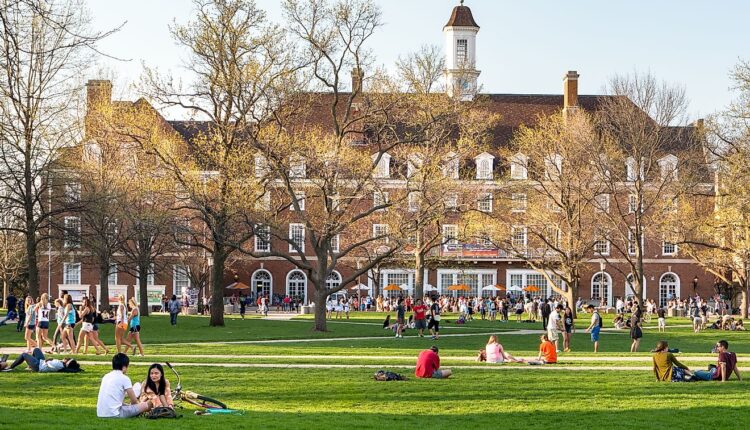 There are approximately 4,500 institutions of higher education in the United States. Texas, New York, California, and Pennsylvania boast the highest concentration of universities. Many host multiple branches, additional schools, and colleges. These are the ten largest public universities in the US by enrollment in the 2021-2022 school year.

Texas A&M University was established in 1871 as the state’s first public college and one of the founders of the Texas A&M University System. Agriculture and Mechanical College of Texas was opened five years later with a military designation and training required until 1965. Today, the public land-grant research institution boasts the largest enrollment in the country, accounting for a 73,284 student body in the 2021-2022 school year.The 21-some square kilometers main campus in College Station is among the nation’s top ten largest institutions of higher education. The university has a popular veterinary medicine degree and strong engineering, business, and education programs. It hosts students from over 120 countries and all states, along with a large majority of true and tried Texans.

UCF and its two branches comprise one of twelve institutions in the State University System of Florida. The public, coeducational institution of higher learning was founded in 1963, with the main campus in Orlando. There’s a branch in Daytona Beach, the Brevard campus in Cocoa, along with two more locations in Orlando. The university boasts the second-largest enrollment in the country, comprising 70,406 students. There is a great choice of graduate degrees and a wide variety of undergraduate curricula. 85% of the “Golden Knights” go for undergrads in business administration, engineering, education, arts and sciences, health and public affairs, as well as electrical engineering and computer science. The enrollment more than doubled from 33,453 students in 2000 to the present day.

Campus of the Ohio State University at Columbus, Ohio.

Ohio State University is part of the state university system with a land-grant main campus in Columbus. The university was founded ninth in the state, in 1870, under the name of the “Ohio Agricultural and Mechanical College.” It was renamed eight years later by the state’s General Assembly while broadening its scope of disciplines. Today, the university boasts the third-largest enrollment in the US of 67,772 students, taught and administered by some 35,000 staff.It is a vast, comprehensive research institution with branches in Lima, Marion, Mansfield, and Newark. The latter two, along with its Agricultural Technical Institute in Wooster, are primarily two-year colleges. The Public Ivy university is considered one of the nation’s best, offering a wide specter of opportunities for its students. It is home to two dozen different schools and colleges, including law and dentistry and colleges of food, agriculture, and environmental sciences, among many others.

The fourth-largest university in the country hosts 60,613 students enrolled for the 2021-2022 school year. U of F is a public coeducational institution of higher learning within the vast State University System of Florida. The comprehensive research university in Gainesville was founded in 1853 with land-grant status and opened in 1906. Last year, U of F ranked fifth best public university in the nation, according to the US News & World Report. The university offers a vast choice of bachelor’s, master’s, doctoral, and professional degrees, but about two-thirds of the student body stick to undergrad. Some two-dozen colleges and schools include the Fisher School of Accounting, the ME Rinker, Sr., School of Building Construction, the School of Forest Resources and Conservation, and the School of Teaching and Learning.

Another Sunshine State university has a unique back-story dating to 1965. Senate Bill 711 called Florida’s Board of Education and the Board of Regents to plan and develop another state university. The founding FIU president Chuck Perry and three leaders, Butler Waugh, Donald McDowell, and Nick Sileo, were intrigued by the peculiar chosen location in Miami’s airfield. They set up shop in the former air traffic controllers’ tower of the Tamiami Airport in 1969 to bring the state’s vision alive. The university grew around FIU’s Ivory Tower, which honorably crowns the campus today. In 1972, FIU boasted the largest opening enrollment in the US collegiate history of 5,667 students. The average age of the first-year full-time students was 25, with eighty percent graduates from the Miami-Dade Community College. They were also working full time, and forty-three percent were married. When the president of the atypical university left leadership at the end of his tenure in 1979, over 10,000 students were navigating the campus comprising five major buildings. FIU is the fifth largest university in the US, with 56,627 students as per 2021-2022 enrollment. Like its founders, many are spirited entrepreneurs who continue envisioning, inventing, and innovating.

Campus of the University of Illinois Urbana-Champaign.

The University of Illinois is located in the twin cities of Champaign and Urbana, with two more campuses in Chicago and Springfield. The Urbana-Champaign main campus hosts the sixth largest enrollment in the US of some 56,300 students. U of I boasts attendance from every state, and extreme popularity among international students, especially Mainland Chinese.The land-granted university was a founder member of the University System of Illinois. It was established five years after the Morrill Act of 1862 called to set aside federal lands for colleges that would “benefit the agricultural and mechanical arts.” The research and teaching institution is a Public Ivy with an array of 250 undergraduate and graduate programs, including doctoral and professional.

Arizona State University is a public research coeducational institution of higher learning. ASU was established in 1885 with the main campus in Tempe and has the country’s seventh-largest enrollment of 54,866 students. It accounts for roughly one-third of the whole ASU student body; another third take classes online. There are four branch campuses within the Phoenix metropolitan area and a great study-abroad program, including locations in Europe, Mexico, Asia, and the Middle East. ASU offers 300 undergraduate degree programs and 400 certificate and graduate programs, awarding bachelor’s, master’s, and doctorate degrees. The graduate degree includes agriculture, engineering, business, education, sciences, and arts. There are also Colleges of Sciences and Law, Architecture and Environmental Design, Fine Arts, and Liberal Arts. ASU boasts rich faculty, with lectures headed by Pulitzer Prize winners, Nobel laureates, National Academy of Science members, or MacArthur Fellows.

GSU is a public coeducational institution of higher learning, part of the University System of Georgia. It was established in 1913 with the main downtown campus in Atlanta. There are six same-city colleges of Arts and Sciences, Business, Education, Health and Human Services, Law, and the Andrew Young School of Policy Studies. The public research university boasts the 8th largest enrollment in the US, with 52,530 students. Well-over half of “The Panthers” attend the main downtown campus. There are 250 graduate and undergraduate degree programs in over 100 fields, including a master’s and doctoral degree program and a professional degree program.

University of Texas campus at Austin.

The ninth-largest university hosts 52,384 students in a whole range of bachelor’s, master’s, doctoral, and professional degrees and disciplines. Its undergraduate and graduate programs are some of the US’ best, with fabulous graduate programs like theater, architecture, accounting, engineering, pharmacy, and others. U of T at Austin was established in 1883, expanding into a major research institution with additional colleges, schools, and dozens of on-campus research units like the Institute for Cellular and Molecular Biology, the Bureau of Economic Geology, the Institute for Neuroscience, and the Bureau of Business Research.The largest university in the University System of Texas boasts one of the nation’s broadest campuses. The University of Texas at Austin library system, with over eight million books, is one of the nation’s largest. There’s also the on-campus Texas National Science Center’s Texas Memorial Museum and the Lyndon Baines Johnson Library and Museum with John F. Kennedy’s papers and memorabilia. Off-campus facilities include McDonald Observatory on Mount Locke, and the Marine Science Institute at Port Aransas. The school boasts strong varsity sports teams, as well as attendance from every state and over 120 countries.

Entrance sign and Wulling Hall on the campus of the University of Minnesota. Editorial credit: Ken Wolter / Shutterstock.com

The University of Minnesota is part of the state university system with the main Twin Cities campus and coeducational campuses in Duluth, Morris, Crookston, and Rochester. The popular main campus spreads scenically along both banks of the Mississippi River at Minneapolis and St. Paul. It was founded as a preparatory school for both genders in 1851 and taught sporadically until the state’s creation seven years later.Today, the public land-grant research university is home to over 300 education, research, and outreach institutes and centers. The Twin Cities Campus is the largest and oldest university campus, with an enrollment of 52,376 for the 2021-2022 school year and the majority of students from within the state.

US universities offer over two million courses in undergraduate and graduate degree programs “designed to teach life skills that will serve students well, no matter which career they choose after graduation.”

Teacher of the Week: Rachel DeKuiper with Rockford Schools