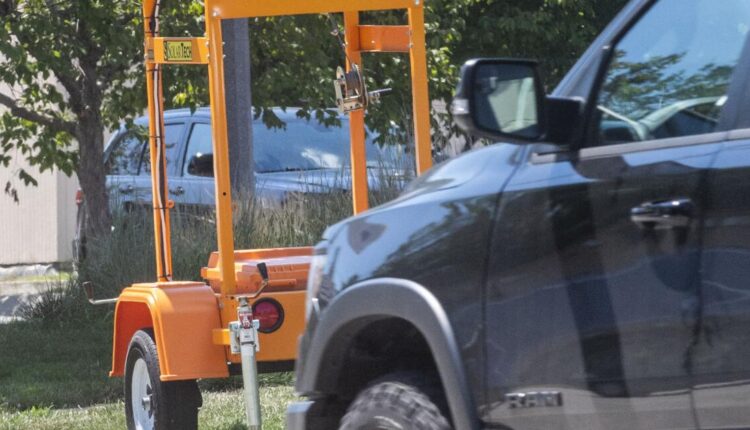 CHAMPAIGN — For many families moving their freshmen into the University of Illinois this week, Jewel Hunter was the first, cheery face to greet them.

From her post in the middle of Ikenberry Commons, the home of several Champaign residence halls and thousands of undergraduates, Hunter directed packed cars and weary travelers to their drop-off points, usually with an excited “good morning!”

“It doesn’t matter if people are upset or tired from their trips,” Hunter said. “I try to be extra nice.”

Hunter is one of the workers from University and Student Services, which brings his workforce to help move-in for more than 100 colleges and universities. The UI hired the company this year in place of the I-Guides after struggling to find volunteers.

“Move-in can be frustrating for a lot of people,” Hunter said. “I try to counteract that with good energy. If I can calm someone down, I’m happy.”

The parking lots are packed. Green Street sidewalks and businesses are bustling. The U of I campus is alive again.

Wednesday marked the midpoint of UI’s Move-In Week, the first day many first-year students made the trip — up, down or sideways — to Champaign-Urbana.

By 2 pm, 4,661 students had moved into their University Housing rooms, up 1,500 from the early morning, UI housing spokesman Chris Axtman-Barker said.

The university expects about 8,800 students to move into dorms this fall semester — 700 fewer than last fall.

“Last year we had many students who were required to complete their first year live-on requirement from the previous year due to COVID-19,” Axtman-Barker said. “This led to a great year last year.”

Last year’s freshman class was a record size of 8,303 students. Fall 2022 enrollment figures won’t be finalized for a few weeks, but the UI has planned to reduce the incoming first-year class by around 600 students to keep pace with campus resources.

The Marcuses, from New York, made the flight on Tuesday to move into freshman Nate. This week, his parents got their first look at campus.

Like many roommate pairings, Nate Marcus and Kyle Smith found each other online. Their New York connection made it stick.

“I’ve been here less than 24 hours, but everyone’s super welcoming,” Smith said. “The more you walk around, the more you see there’s so much here. It’s overwhelming, but in a good way.”

The UI has done away with many of its COVID-19-related restrictions, including mandatory indoor masking and capacity limits. Unlike last year, UI Housing isn’t limiting the number of helpers students can bring for their move-in.

“There was a lot of people helping,” said freshman Diana Moran. “We didn’t have any carts, but with my mom, dad and two sisters, it was a lot easier.”

As Moran connected with fellow freshman Lisset Solache, also from Chicago, the sounds of Marching Illini practice blared in the background, and a chain of Army ROTC students ran by.

“It’s a really big place,” Solache said. “I’m just hoping to make new friends and get used to everything.”

All the classic Welcome Week activities are soon to come.