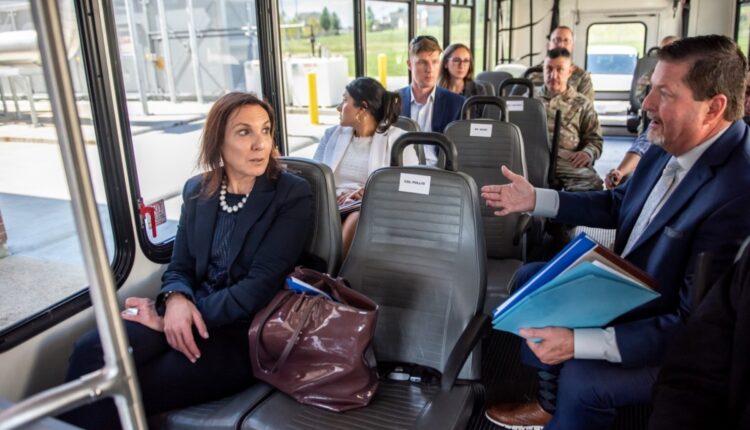 At the new hospital construction site on Wednesday, Jacobson joined US Sen. Josh Hawley and Maj. Gen. James Bonner, Maneuver Support Center of Excellence and Fort Leonard Wood commanding general, to receive a brief on the status of the project by Austin Johnson, resident engineer from the US Army Corps of Engineers’ Kansas City District.

Johnson said the project includes a 235,400-square-foot hospital, 193,300-square-foot clinic, central utility plant, emergency back-up generators, five-bay ambulance garage, helipad and supporting facilities. When those pieces are completed in 2024, the existing hospital — originally built in 1965 — will then be scheduled for demolition, and renovation of the existing optical fabrication lab and parking improvements are slated to follow.

Simpson discussed many of the projects and facilities that would later be seen on a windshield tour of the post, including the Propane-Air Mixing Plant and the two combined heat and power plants on post. He said his goal is to build resiliency and better ensure reliable power and water, so the training mission can continue here through any unforeseen problems.

Fort Leonard Wood’s Propane-Air Mixing Plant makes synthetic natural gas in the event of a natural gas failure, Simpson said. This also comes in handy when the price of natural gas soars, as it did in February 2021, during the infamous winter storm that caused an energy infrastructure failure in Texas. Fort Leonard Wood saved nearly $2 million through the use of the plant.

“The price went from about $2.55 per dekatherm — keep in mind, on those coldest days, we’re burning 6,000 — to about $225 per dekatherm,” Simpson said. “We were able to offset about 20 percent of our gas needs this way. This has been a tremendous asset; it’s a great resiliency piece on our part.”

Simpson said DPW is working with the USACE to complete the installation of two combined heat and power plants here.

The implementation of combined heat and power, also commonly known as cogeneration, increases energy efficiency by allowing heat that would normally be lost in power generation to be recovered to provide heating and/or cooling, which cuts costs, Simpson said.

“The efficiency comes because we are capturing the heat that’s produced in that process and putting that heat into a boiler plant,” he said. “So, we’re not having to buy that natural gas to heat the boilers. The natural gas offsets itself while we are able to produce our own electricity.”

When they are completed, Simpson said the plants will give Fort Leonard Wood the ability to produce about seven percent of its peak-power demand.

Simpson also discussed preparations being made here for the arrival of electric vehicles, or EVs.

Fort Leonard Wood’s Logistics Readiness Center maintains approximately 540 vehicles that meet the definition of non-tactical, and DPW is working out ways to keep those vehicles charged up and ready for use every day.

“DPW’s responsibility is to assure charging stations are installed ahead of the arrival of the electrical vehicles,” he said. “We must be ahead of the demand for them.”

Because of the lower mileage government-owned vehicles are typically driven — making it less likely they will need to be charged every day — Simpson said the plan will most likely involve having one charging station for every four to six vehicles, and he expects to see the first seven charging stations up and running within a month or two.

To meet the goal of installing that many stations here, Simpson said DPW has employed a unique solution. They are privatizing the ownership of the charging stations under the already-existing electrical distribution contract — doing this has several advantages.

“First of all, we save on manpower of managing the purchases, operation and maintenance, and we don’t have to worry about life-cycle replacements,” he said. “We will simply pay a monthly fee, just as we do for maintaining our other utility distribution systems.”

Simpson also mentioned a newer agreement reached with the US Army Prime Power School here, which has the mission of training service members to install, operate and maintain certain types of electrical power plants.

Leaders from DPW and the school, along with other stakeholders — including some of Fort Leonard Wood’s utility partners — are working together to address energy resiliency by looking into the possibility of utilizing the expertise and power-generation capabilities of the Prime Power School should the installation ever experience an electrical energy crisis, Simpson said.

After a quick look at Fort Leonard Wood’s Recycling Center — which earns money each year to improve quality-of-life services on the installation, including many Family and Morale, Welfare and Recreation programs — the group then visited the Contingency Basing, Integration, Training and Evaluation Center, or CBITEC.

Decker traveled to Fort Leonard Wood to brief Jacobson on the program.

As an electrified battlefield becomes more of a reality, he said, support for operational energy — or the energy required for training, moving and sustaining military forces and weapons platforms for military operations — is an ERDC priority.

One of the largest obstacles holding back operational energy research is the lack of data, he said. To address this, ERDC developed what’s called the Deployable Metering and Monitoring System, or DMMS, which was designed to collect data in line with existing electrical distribution equipment and consolidate it in such a way that more informed energy decisions can be made.

After a full day of touring facilities and hearing from energy experts here, Jacobson said she is “very, very impressed” with Fort Leonard Wood’s programs.

“The scope of the forward thinking and innovative solutions is beyond impressive,” she said. “It really makes me appreciate how much talent we have in the Army, and how we need to do much better to deploy that talent, not just across the enterprise, but throughout the DOD.”

OSF to commemorate 100 years of care in Urbana, Illinois