USI Volleyball wraps up its season at SIU-Edwardsville 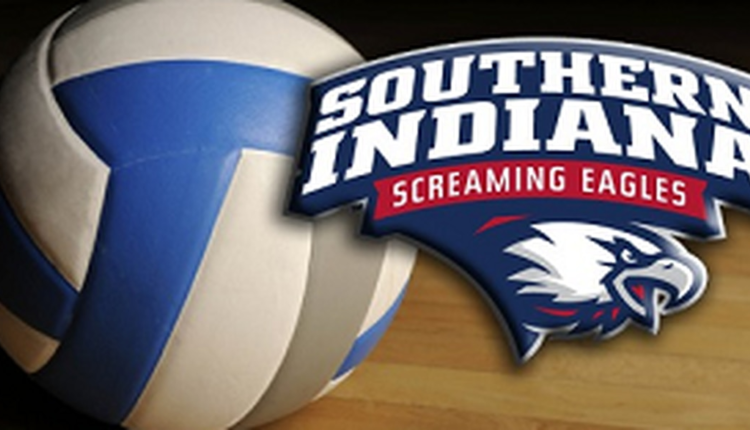 A late comeback from SIUE proves to be costly for USI as the Eagles fall 25-19 in the opening frame. It was a good start to the match for USI, going up 3-0 after three straight kills. Junior outside hitter Leah Anderson (Bloomington, Illinois) provided two of the three kills to lift the Eagles into an early lead. After going up 8-5, USI witnessed SIUE go on a 14-4 surge that put the Eagles back, 19-12. USI was able to get back a couple of points after a couple of Cougars’ miscues, but it was not enough as SIUE strolls to a first-set victory. Both sides provided big offensive numbers as the Eagles had 13 kills and a .235 hitting percentage while the Cougars added 13 kills and a .387 hitting percentage.

USI used its offense to slide past SIUE in the second set, 29-27. The Eagles jumped ahead of the Cougars, 6-3, after a pair of early kills from Anderson while sophomore outside hitter Abby Weber (Fishers, Indiana) and sophomore middle hitter Paris Downing (Avon, Indiana) each provided one kill to contribute to the early lead. SIUE retaliated with a 6-0 stint that cost USI the lead. The Eagles were able to catch up and tie it at 11 before a big 4-0 run put USI back in the driver’s seat, 15-13. After back-and-forth action, the Eagles and Cougars had it knotted up at 25 before USI stole the show by nabbing four kills to win the set. Sophomore outside/right side hitter Abby Bednar (Chagrin Falls, Ohio) threw down three of the final four kills to help the Eagles win the frame. As a team, USI put up 16 kills, the most for the Eagles in the match.

USI couldn’t catch up to the Cougars, dropping the third set, 25-19. Despite taking a 5-4 lead, USI watched SIUE steal the lead, 8-5, after a quick 4-0 stint. The Eagles were able to tie it up after putting up three-straight points before the Cougars regained the lead and never looked back. USI had a chance to tie it at 15 until SIUE went on another 4-0 run that helped decide the set. Both sides traded off points until the Cougars ended the frame with a set-sealing ace to go up 2-1 in the match.

A strong effort and late comeback forced pressure on SIUE as USI won the fourth frame, 25-23. The Eagles spotted a 4-0 gap early to lift themselves to an 8-7 lead before the Cougars tallied a 6-0 surge to take the 13-8 advantage. Down by five, USI used short spurts to cut the deficit and later take the lead, 19-18. In the middle of that stint was a 4-0 run that had four-straight SIUE offensive errors. The Eagles’ offense provided the eight final points off seven kills and one ace with sophomore setter Carly Sobieralski (Indianapolis, Indiana) contributing three of the kills.

In the final frame, USI allowed an early SIUE lead that ended in a 15-10 loss. Tied at two, the Cougars went on a short 4-0 run that proved to be costly for the Eagles. USI was able to get within two again before SIUE extended the lead of a 3-0 surge that doubled up the Eagles, 10-5. Down by five again, USI tried to get the offense rolling after a kill from Weber and an ace from sophomore defensive specialist/outside hitter Anna Ballengee (Montgomery, Indiana) to cut the deficit to just three, but it was not enough as the Cougars struck down a pair of kills to seal the Eagles’ fate.