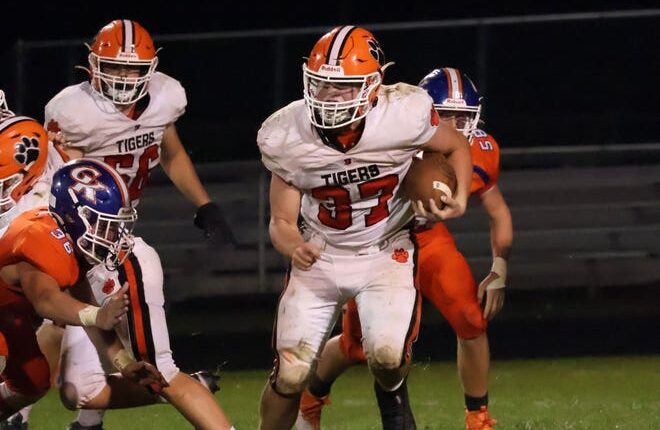 It was another night full of big-time performances from Rockford-area football players during Week 4 games on Friday night. And each week, the Rockford Register Star will take a look at the top-performing teams and players from all across the region.

Jones ran for three touchdowns and over 100 yards in Guilford’s 42-19 victory over Harlem that lifted the Vikings to 3-1 and dropped Harlem to 2-2.

Warren completed 7 of 14 passes for 126 yards, two touchdowns and one interception to rally Hononegah to a 42-22 win at Freeport. Warren was also Hono’s leading rusher with 71 yards and two TDs on 11 carries to lead the team back from an early 14-0 deficit.

Macon caught a 33-yard touchdown pass, returned a 55-yard pick-6 and threw a 52-yard TD pass on a trick play to give Freeport a 22-14 halftime lead in its eventual 42-22 loss to undefeated Hononegah.

Dennis completed 9 of 11 passes for 152 yards with four touchdowns and one interception in a 61-6 victory over Belvidere.

Niedermeier continued to shine by throwing for 201 yards and 3 TDs during a Dakota victory over Forreston on Friday. Niedermeier led Dakota 52 yards in the final 1:12 for the game-winning touchdown pass to Thomas Bowman with eight seconds left to play. He completed 16 of 25 passes and did not throw an interception.

The North Boone senior quarterback threw for 191 yards and 4 TDs and rushed for 173 yards on 12 carries, leading the Vikings to their first win of the season, 47-0 over Rockford Christian.

Catlin returned from missing the first three weeks with a fractured left ankle to rush for 110 yards on 21 carries, including a 34-yard TD, in East’s 22-14 win over Auburn.

Dubose ran for 75 yards on only seven carries in Auburn’s 22-14 loss to East.

Dinsmore had touchdown runs of 20 and 2 yards to lead Belvidere North to a 46-7 victory over Jefferson and keep the Blue Thunder undefeated at 4-0. He finished with 40 yards on eight carries.

Gyllenswan ran for a team-high 73 yards on 11 carries and had two TDs in Belvidere North’s 46-7 win over Jefferson. He also completed 2 of 6 passes for 70 yards.

Kobler had another big game, rumbling for 210 yards on 15 carries with 3 TDs, but Forreston still fell 34-28 to Dakota.

Mulcahy rushed for 168 yards on 12 carries with three touchdowns to spark Du/Pec to a 43-0 victory over E/PC. It was a key game for Du/Pec, which suffered its first loss of the season 31-22 to Fulton last week.

Myhres returned an interception for a touchdown for the second week in a row to clinch South Beloit’s 40-20 victory over Alden-Hebron and move the Sobos to 3-1 on the season.

Muhammad had 12 rushes for 96 yards to lead Winnebago to a dominant 27-8 win over Oregon. Logan Olson rushed for 74 yards on 10 carries for Winnebago, and Alec Weavel threw for 77 yards and a touchdown in the win.