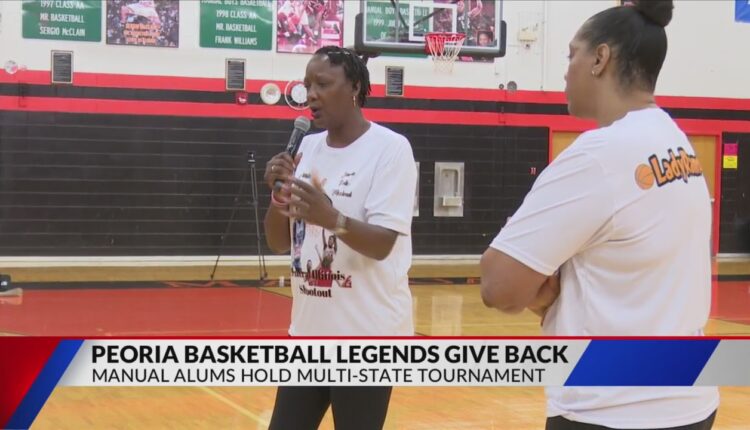 PEORIA, Illinois (WMBD) – Two of the best women’s basketball players to come out of Peoria were part of a tournament Thursday that helped develop Midwest players while also trying to teach them about life.

1996 Olympic Gold Medalist Carla Mcghee and University of Illinois Hall of Fame Jonell McCloud were the honored guests of the Central Illinois Shootout at their alma mater Manual High School.

The tournament featured teams from Illinois, Indiana and Wisconsin and was organized by Coach Holly Nelson. During a lunch break, both McGhee and McCloud spoke to the young women about the struggles they overcame to achieve great success on and off the basketball court.

The two Manual alums were high school teammates in the 1980s. Both answered questions after short speeches and said they hoped the girls learned the value of hard work.

“Before you are a polished person. But when I was here in these hallways and this floor, I was very flawed. But you know I worked hard. I did what I was supposed to do and good things happen.”

Mcghee talked about the personality transformation she had while attending the University of Tennessee and playing legendary coach Pat Summitt.

After a rough start to her freshman season, Mcghee said she wanted to become a better teammate and putting in the required work and sweat that was required to play at such a high level.

Both women added that social media can be one of the biggest distractions young women face today that they themselves didn’t have to deal with in their days at Peoria Manual.