A look at campaign finances of local political candidates 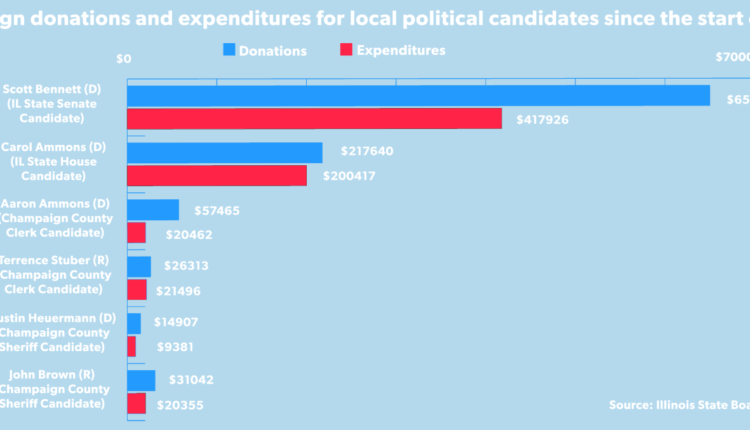 Carol Ammons, Democratic candidate for the Illinois House of Representatives who ran unopposed, received over $215,000 since Jan. 1, 2020, for her campaign, according to data from the Illinois State Board of Elections.

Ammons received the bulk of her donations from unions and union-affiliated political action committees. These donations accumulated to approximately $150,000, covering more than half of her total donations.

With this money, Carol Ammons and her team spent it variously. $14,000 of it went to advertising for billboards, yard signs and Squarespace. Printing and mailing fees consumed over $30,000 of Ammons’ total. Transportation, for example gas, car lease payments and airfare, took up over $20,000.

Lastly, Ammons sent approximately $18,000 to the other candidates’ campaigns, including $9,415 to her husband and Democrat for county clerk, Aaron Ammons.

Democratic Illinois Sen. Scott Bennett received over $650,000 since Jan. 1, 2020, for his campaign. Bennett, Running uncontested, received the majority of the funds by means of individual contributions, transfers in from other campaigns and in-kind, non-monetary contributions.

Transfer ins from PACs accounted for over $220,000, with the International Brotherhood of Electrical Workers making a notable $57,800 contribution to the campaign in August 2020.

Further notable contributions include $70,000 from the Illinois Political Action Committee for Education, $50,000 from the Southern Central Illinois Laborers’ Political League, $20,000 from Rachelle Aud Crowe for Senate and $10,000 from Comcast.

In the same time period, Bennett’s campaign has spent just under $420,000. The largest of his expenditures was approximately $95,000 spent on mail via The Strategy Group LLC. Bennett spent a further $125,000 on campaigning and printing, including $55,000 on media. Over $36,000 was spent on transportation and lodging.

Among other numerous expenses, $32,000 went to various sponsorships and donations. Bennett donated to the University of Illinois Foundation, CU at Home and the Champaign Park District, among many others.

His campaign also received $9,415 from his wife’s campaign. Carol Ammons is running for state representative in the 103rd district.

During an introduction he gave at a forum for the Champaign County clerk race on Oct. 27, Ammons, a former union president, affirmed his support for labor unions, saying “We need to preserve worker rights … I wholeheartedly support the right to collectively bargain.”

Ammons spent a total of $20,462 on his campaign, including almost $9,000 on printing, $1,800 on “Television Media” and a $1000 contribution to Delia Ramirez’s campaign, who is running for Congress in Illinois’ third congressional district.

Of the $26,313.70 received in donations by the Stuber campaign, about 56%, or $14,720.62, came from contributions from individual people. Only five of his 32 total donations came from organizations or businesses.

Newcomer Republican John Brown has a significant lead in terms of donations over incumbent Democrat Dustin Heuerman. Brown has totalled over $30,000 and Heuerman around $15,000.

A vast majority of Brown’s donations came from in the form of individual donations, totaling $22,302.87, or about 71.8% of the campaign’s total finances, whereas Heuerman’s campaign is primarily self-funded, having put in $6,382.70 of his own money into the campaign or about 42.1% of the total.