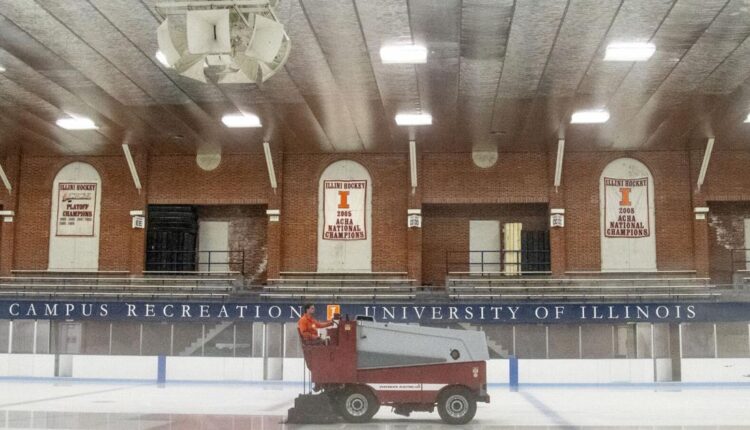 CHAMPAIGN — Things will look a bit different when the puck drops in central Illinois this fall.

Nick Fabbrini was the director of coaching for the Champaign Urbana Youth Hockey Association as well as the head coach for the University of Illinois club program.

He left the area in the spring for a new role in Chicagoland, leaving multiple levels of the local hockey scene with a sizable hole to fill.

“Him leaving was definitely something that we maybe weren’t prepared for,” said CUYHA Vice President Lisa Thompson. “We hadn’t really thought ahead for that. But we do have a board who’s really dedicated to the organization and to the kids and to the community. And we’ve worked hard to create opportunities for teams to still thrive within the organization.”

The CUYHA has programs at a few different age levels, ranging from its learn-to-play program that welcomes newcomers ages 5-8 to a travel program for high school students.

“I think 10U and high school have solid teams,” said CUYHA secretary Kara Vanskike. “We could use some more 12U and 14U players.”

An interim coaching structure was in place for the organization’s tryouts, which began on Monday and concluded Thursday.

“It’s not exactly business as usual, but we’re working to make it that way,” Thompson said. “We have somebody who’s stepped in as an interim for part of those duties. And some of the other duties will probably be fulfilled by coaches, until a director is found.”

Illini Hockey is in a similar position. The club fields teams in the American Collegiate Hockey Association’s D-1 and D-2 levels; Fabbrini was the head coach of the former unit through the end of the last season.

It’s an encouraging figure for a team that has yet to name its new head coach, a search that team President Atticus Helfer hopes is resolved within the next few weeks. It began in late June when Fabbrini provided the club with a list of coaches to consider.

“The big issue was either the competency of coaches,” said Helfer, a junior defenseman on the D-1 team. “Some of them had come from, like, squirt coaching or (smaller school) high school coaching. And I don’t really think that they understood kind of how much work they would have had to put in with (being an) ACHA head coach.”

Leading an ACHA club team is far from an easy task; In addition to the myriad of on-ice responsibilities, club hockey coaches must consider booking game officials, scheduling buses and arranging for hotels.

Another complication is that the team, which receives no financial backing from the university as a registered student organization, competes with private universities such as Lindenwood and Maryville that funnel more resources into their club programs.

“The other problem was, if we did have, let’s say, like an old ACHA coach that we’d reach out to, we don’t get any help from the school at all,”helfer said. “So it’s kind of an uphill battle both ways, in terms of our salary is not exactly competitive with other schools.”

Helper is a Champaign native who began playing in the CUYHA before moving on to programs based in St. Louis and Chicago. The Champaign Central graduate began his playing career in his current home venue: the UI Ice Arena.

As both programs replace Fabbrini’s leadership, they’ll still need to share time along with the public and a smattering of other programs at the 91-year-old rink, which is Champaign County’s only sheet of ice and lies dormant in the summertime.

“It’s always challenging to get enough ice time for everybody who wants it,” Thompson said. “I think Bill (Zeman) from the arena does a good job of working with us to get what we can use in times that will work with our younger people.”

Thompson’s sons play in the organization at the 10U and 14U levels. When they need another sheet of ice to play on, they usually make the drive to a rink in Indianapolis.

“As hockey got to be more popular and all the other things that they’re doing, the single sheet of ice is difficult,” Thompson said. “We can’t do conditioning camps early. We can’t do any kind of summer opportunities to keep kids skating over the summer. We have to send them elsewhere for those types of skill-building. And that’s unfortunate, but we don’t we don’t have any control over that.”

Vanskike has a son who plays in the organization’s 12U program, though summer ice availability isn’t necessarily an issue.

Her son has attended a camp at Wheaton College each of the last two summers and has taken the rest of the summer months off from hockey, opting to play golf instead.

His interest narrows back in on hockey when the colder months come around, though the league offers plenty of flexibility for players with multiple interests, especially as it looks to emerge from the pandemic.

“I think that’s one of the things that’s important to realize, is that (athletes in general), when they’re good all-around athletes, it makes them better at all of those different things.”

Rising tides lift all ships, and the organization believes that the local hockey scene will bounce back from the uncertainty brought forth by the pandemic and its recent changes in leadership.

“It’s a local opportunity to get your kids involved with hockey,” Vanskike said. “It’s a great experience, and you don’t have to travel far. And the board is dedicated, and we’re not going anywhere. Sure, Nick took a different opportunity and we’re looking for a director of coaching, but that’s no reason to not get involved.”