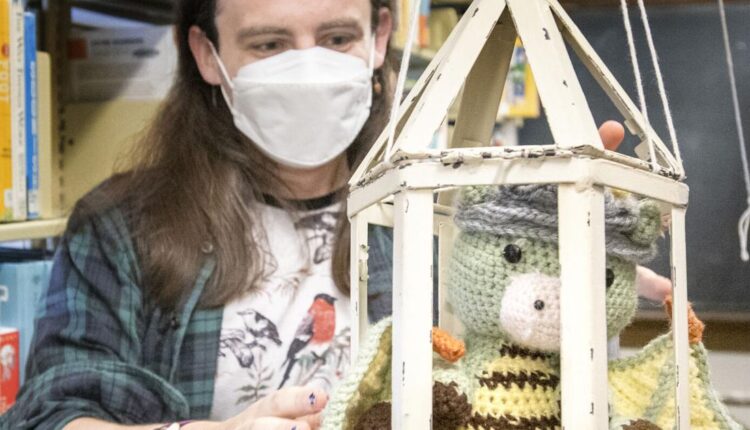 The mission for University Laboratory High School students — if they choose to accept it — “rescue” library dragon mascot, Pickles.

It’s part of an elaborate escape-room set up this week in the Uni High library. Starting Monday and running throughout the week, teams of three to five students will take turns trying to find Pickles, a stuffed animal.

If it is difficult, the credit goes to their peers. The escape-room story, puzzles and design were done by Uni students and library staff.

A committee of students helped build the room, which is located in the back of the library.

For six years, Uni has been hosting escape rooms. The idea came from a former graduate student who was helping at the school.

Current grad student Charlie Newman-Johnson has helped with the project. So has practicum student Tori Gellman, who is acting in the escape room.

How does it work?

Clues are hidden everywhere. Those clues lead to other clues. Eventually, teams are able to solve their way out. Or not.

There are two different levels, one easy and the other more challenging.

The theme of this year’s escape room is cows. That helps explain why the story has “Pickles” being kidnapped by the Moofia, an organization of evil cattle.

“It is really quirky, but it really works,” Arnold said.

Arnold and the crew tested the escape room Friday and liked how it went.

The Uni escape rooms have been popular since they started.

“It couldn’t happen without the students,” Arnold said.

The newest edition celebrates the memory of late Uni High French and computer literacy teacher John Garvey. Mr. Garvey, who died in April 2021 at age 63, was a big fan of escape rooms.

“Every year, he would help us test the escape room,” Arnold said. “He was a really huge library supporter.”

A puzzle enthusiast, Mr. Garvey went to different escape rooms with his family.

“He was such an interesting guy,” Arnold said. “He loved reading, so he would be in the library a lot.”

Going forward the annual event with be known as the John B. Garvey Escape Room.

Escape rooms have grown in popularity. Uni has teamed with two in the community — Champaign’s Brainstorm Escapes and Urbana’s C-U Adventures in Time and Space — to help with planning.

The escape room is open to Uni High students, who sign up for 20-minute blocks held during lunchtime and after school. There are 15 slots for the week.

Would Arnold consider opening the escape room to the public?

“Maybe for future years, but for this year we really don’t have the capacity,” Arnold said.

The escape room includes student actors, so their schedules are a strong consideration. Not cool to be missing an English class to take part in an escape room.

Any high schools interested in establishing an escape room can ask Arnold about it. She is willing to help.