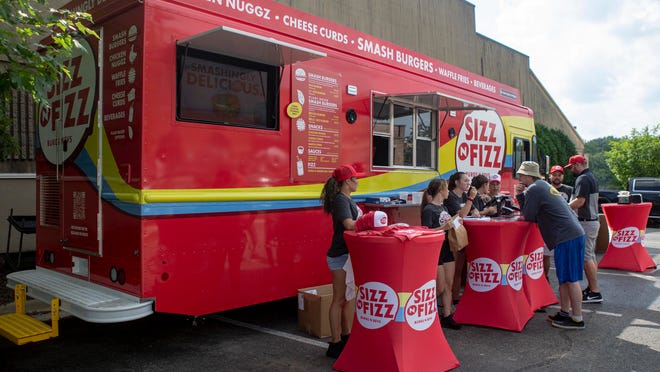 ROCKFORD — Burger enthusiasts in the area have a new option.

Sizz N Fizz, which is billed as a brand-new food truck concept, made its debut Tuesday in the parking lot of Prairie Street Brewing Company.

The truck’s menu focuses on local ingredients and affordable food items including what is called a smash burger, a two-and-a-half to three ounce patty which is grilled and flattened by an iron press, according to SIZZ N FIZZ spokesperson Katie Rotello.

Not in the mood for a burger?

More:Craving food truck eats? Here are 15 of the Rockford area’s favorites and newcomers

Sizz N Fizz will be the flagship food truck for what is called Truckin’ Tuesdays from 4 to 9 p.m. the Prairie Street Brewing Co. parking lot. While the brewing company is closed on Tuesdays, the dockside taproom will be open for beverages.

The food truck will also be at Prairie Street on Thursdays and Saturdays and will be at Rockford City Market each Friday.

“Sizz N Fizz is brought to you by the same founders that were the inspiration for Prairie Street Brewing Company,” Rotello said. “It’s just another fun experience brought to Rockford.”

Years before Shockwave jet truck crash, I rode it at 300 mph