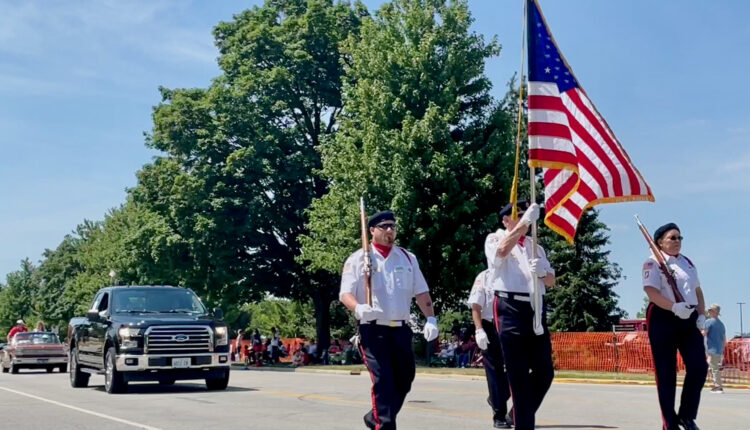 While a few hours to the north, the Fourth of July parade in Highland Park was marred by tragedy, things were peaceful in Champaign-Urbana.

Starting at the intersection of Kirby Avenue and First Street, the parade route traveled east down Florida Avenue and ended near the Alice Campbell Alumni Center on Lincoln Avenue.

Parade attendees lined the streets of Kirby, Florida and Lincoln Avenues, seeking refuge from the sweltering sun under the shade provided by tree branches.

Parade floats and attendees decorated themselves in red, white and blue. From firetrucks to sports cars to an MTD bus appearance, this year’s parade featured numerous community organizations and businesses.

For some attendees, going to the parade is an annual event – ​​other than the past two years in which it was canceled due to COVID-19. This year’s parade was the county’s first since 2019.

Kim Eveland has lived in Champaign for 17 years and has been coming to the parade for about a decade. She said she particularly enjoys the weather, listening to live music, and seeing all the American flags.

She’s said she’s proud to be an American because people can “have a voice and be free.”

For Pawarisa Chintanakarn and her family, Monday was their first time attending Champaign County’s Fourth of July parade. She said she was excited to watch the parade and to pay respects to the US and its diversity.

“When I came here, I think this country is so multicultural, and they have so many cultural traditions that we had to learn,” she said. “So then people come (to) learn everything and may have the good opportunity for foreign people to find a job and have a good life.”

Kyle Hubert has lived in the Champaign-Urbana area his entire life and attended the parade with his mom and son. Like Chintanakarn, he said he also appreciates the different backgrounds and cultures he’s been introduced to.

“I think that’s only going to continue to evolve, hopefully, to better include and provide and support a culture that is great for everybody,” he said. “And I’m hopeful for our kids and their kids.”

In reference to the country’s increasing political division, Hubert said it’s important for citizens to come together.

“No matter what our disagreements are with one another, our points are valid to each other, and we just have to be able to find a way to respect both sides’ opinions on things and come to some sort of understanding on both,” he said. “And that’s easier said than done.”

Sarah Spizzirri from Champaign attended the parade with her family. It was their second time attending. She said she’s proud to be an American because of the multiple opportunities for open discussions and free speech, which she said begins with the youth.

“It’s starting at young ages of really encouraging kids at young ages to have open discussions, encouraging them to get into politics if they have that drive, and really, again, having the younger generations starting to move up the chain of politics,” she said.

As the last float in the parade passed paradegoers, people began packing up their fold-out chairs, and some moved to the streets to pick up the remaining pieces of candy.

Later that evening, the county hosted a fireworks show near the U of I State Farm Center at dusk.

When are we getting another shot? :: WRAL.com