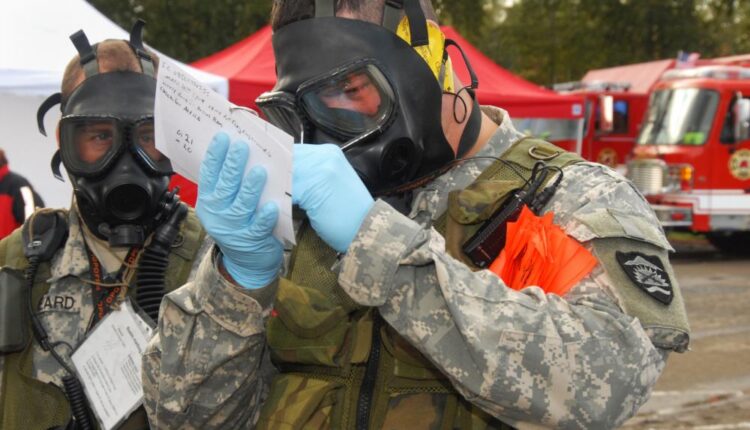 PORTLAND, Ore. – On a damp October afternoon, six United States Air Force personnel carefully lift the simulated human remains of disaster victim onto a liter and take them back to a temporary field morgue.

The purpose of their exercise was to learn how to show proper respect to victims of accidental disasters. More importantly, they also learn how to carefully recover what remains in an austere or contaminated environment.

Members of the 141st Air Rescue Wing from Fairchild Air Force Base in Spokane, Washington, the 182nd Air Wing from Peoria, Illinois and the 142nd Fighter Wing in Portland, Oregon, participated in the event organized by the National Guard Bureau.

“The motivational level and dedication of these young Airmen is a success in itself,” said Capt. Gerald Cullers.

The 11-member group, comprised of Airmen from Illinois and Washington, are part of the Fatality Search and Recovery Team (FSRT).

They are tasked to recover the remains of unidentified casualties and move them to the morgue for proper identification. In a word, they provide the “muscle” for the identification process for victims of man-made or natural disasters, said Cullers.

The FSRT is a National Guard capability in support of Homeland Defense Incidents in the Three-Tiered response of local, state and federal situations.

The National Guard Bureau hopes to partner with Disaster Mortuary Operational Response Team (DMORT) within the Department of Health and Human Services in order to help bring closure to the families of missing service members.

“We came to Portland to test a new capability that the Air National Guard Services is trying to start up. As of right now there is no specialized mission for Fatality Management, which encompasses the extraction of human remains in a Chemical, Biological, Radiological, and Nuclear Environment,” said Capt. Michael Fanton, a spokesperson from NGB.

Oregon Air National Guard Capt. Lisa Scott with the 142nd Fighter Wing in Portland is the point of contact for the Portland Air Guard Base for the NGB project.

“I think they are planning on doing the training biannually, and if that’s the case we will be ready to host it again,” she said.

“Hopefully, every state will have their own team. It’s going to be an excellent program within the next five years,” Scott added.

“The Peoria and the Fairchild Teams were asked to take this on because of their history and capabilities. They’ve always been the go-to units in Services,” said Col. Robert Aunan of the Washington Air National Guard.

This was the first time the Portland Air Base hosted this type of event, but many of the participants, and indeed leaders in the Oregon Air Guard agree that getting together on a biannual basis is good for the organization.

Having the NGB mortuary affairs exercise the same week as the TOPOFF 4 event presented some unique challenges, especially with the Portland Air Base being used as one of the main locations for both exercises.

“However, the work of the FSRT is perfectly suited for a real-world event like TOPOFF, should it happen,” Fanton explained. “In such a scenario, teams would be assigned at the wing level, and one team for each FEMA region.”