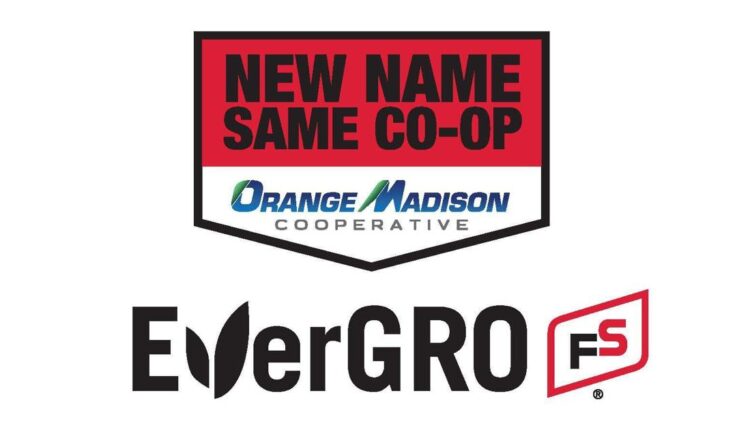 A leading local agricultural co-op is changing its name.

Orange Madison Cooperative will be known as EverGRO Cooperative, with six locations from Winchester to Charlottesville, effective Sept. 1, according to a cooperative release on Monday.

“Our team is ecstatic to announce that beginning Thursday, Sept. 1, Orange Madison Cooperative will change its name to EverGRO!” the Co-Op posted on Facebook.

“While the Orange Madison Cooperative name has served us extremely well these last 90 years, it’s geographical nature didn’t leave room for everything we want to accomplish.

“After a year of discussions around this change, our team is elated to be moving forward with the name EverGRO. To some, this may seem like just a name change, but to us, it is so much more,” the post stated.

Headquartered on James Madison Highway in Orange County, Madison Orange Cooperative also has farm stores in in Madison and Louisa and a bulk energy plant in Charlottesville.

Given the wide geographical area served by the cooperative and to situate it for possible further expansion, the leadership team and board of directors felt it would be appropriate to change the name of the cooperative, the release stated.

After 10 months of discussion, the nine-member Board of Directors unanimously voted on the new name, EverGRO Cooperative.

In May, cooperative membership voted to confirm that name.

“This name change will promote the unification of Orange Madison Cooperative and Front Royal Cooperative becoming a cooperative that is ever-growing, trustworthy, and passionate about our customers success in their agricultural endeavors,” said General Manager Justin Dreckman.

The Co-Op is preparing to change all signage in the coming months to reflect the new name, according to spokeswoman Serena Humphrey.

EverGRO Cooperative will be adopting the FS (Farm Supply) brand as part of its image upgrade. FS is a trademark of GROWMARK, Inc., of Bloomington, Illinois, and is used by member cooperatives.

Orange Madison Cooperative has been a supporter of the community, dedicated to providing quality products and superior service at the best possible value since its establishment in 1933, according to the business release.

“The value of agriculture to your family, to ours, to our immediate community and surrounding regions cannot be overstated. What started from a small group of Orange County farmers splitting supplies that were delivered by rail car to a nearby railroad station, has grown into a versatile, self-sustainable company capable of providing services in agronomy, energy, animal health, and farm supplies in six locations spread across Virginia,” the release stated.

“They have the same value-added and go-to-market mindset as our members,” said GROWMARK CEO Mark Orr in a statement. “Orange Madison Cooperative complements our Mid-Atlantic operations and will be a terrific opportunity to grow the FS brand along the East Coast.”

GROWMARK is a like-minded business partner and will help take Orange Madison Cooperative to the next level with technology adaptation and bolstering our supply chain network for customers, said Dreckman.

“We believe the FS brand will have excellent recognition in the agriculture space in Virginia within the next five years,” he said.

$106M in Rebuild Illinois grants headed to main streets near you