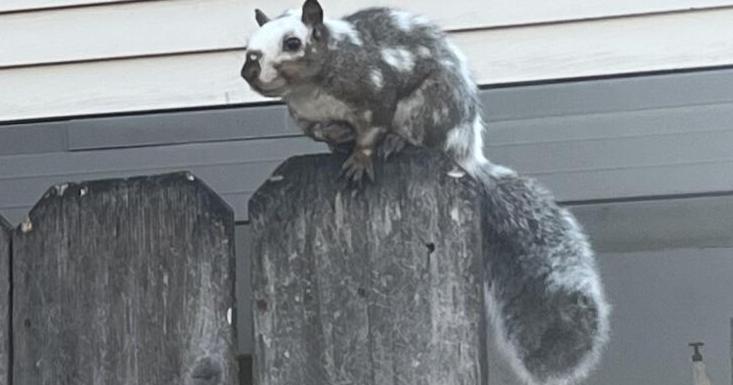 CHAMPAIGN — The recent passing of a rare and beloved piebald squirrel on the University of Illinois campus has prompted a movement to preserve its remains.

Its recognizable fur patterned with unique splotches of white, the squirrel nicknamed Pinto Bean met its demise last weekend on Springfield Avenue, presumably after being hit by a vehicle.

In the last year, Pinto Bean has become something of a micro-celebrity inside UI online communities, like the r/UIUC Reddit page. Passers-by have continually posted videos and pictures of their sightings of the uniquely spotted squirrel.

It’s not clear who came up with the nickname, but the squirrel’s appearance explains it all. Thanks to a genetic mutation, piebald animals have a mixture of normal fur and unpigmented white spots.

“People pay attention to squirrels on college campuses, and cities in general can be places where these squirrels with more unusual colors either get noticed or survive better because they have fewer predators,” he said. “Whenever you have an individual animal that is unique in some way, it’s natural for people to relate to it.”

All the love poured in for the squirrel made news of its death that much more distressing. UI senior Marrina White “couldn’t believe it” when she heard Pinto Bean had died.

White, president of the Illini Wildlife and Conservation Club on campus, spotted the memorable piebald squirrel once while walking back to her apartment. Squirrels are some of her favorite creatures, she said — and she has the stuffed animals to show for it.

Her club will hold a moment of silence in remembrance of Pinto Bean during its Thursday meeting.

“We loved Pinto Bean, we were invested in it,” White said. “Anything we can do to help preserve it and help promote education about this kind of stuff is just what we do. It’s our passion.”

Another member of the conservation club picked up the carcass this weekend and gave it to a student looking to preserve it. Now, Pinto Bean is in the hands of Clark Jackson, a Champaign townie, truck driver and member of the UI’s Outdoor Adventure Club.

“It seemed like people wanted Pinto Bean to be preserved so we could view him later. Burying would’ve been a one-and-done deal,” he said. “I volunteered because I knew the capacity and I what I was doing.”

Jackson was to take the squirrel’s frozen remains to Bob’s Taxidermy in Bloomington. The job is expected to cost more than $300, he said; Jackson plans to post a fundraising link to break even on the expenses.

Pinto Bean’s final place of rest is yet to be determined. Jackson hopes to find a “proper spot” to display the creature in its new pose.

“Pinto will be greatly missed,” he said. “It’s not exactly a campus pet; it’s more like a grassroots, unofficial mascot.

“Hopefully, people can see him and properly remember him. It’s not too often you see a piebald squirrel.”