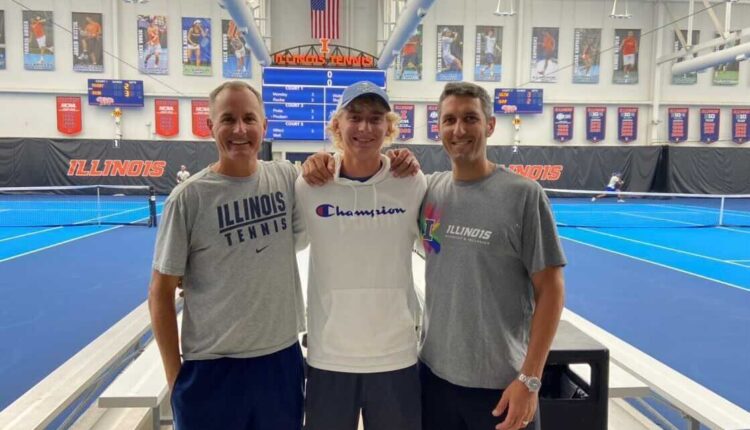 A hopeful season awaits the Illinois men’s tennis team. A young core, as well as three incoming players, will compete for the starting spots, as the team hopes to reach the heights reached two years ago when the team made it to the Sweet Sixteen and won the Big Ten tournament. Head coach Brad Dancer is looking to revitalize his team as they hope to bounce back after last season’s 14-14 record.

As the offseason has continued for the Illinois men’s tennis team, it has built upon last season’s strengths through a very promising recruiting class. This class includes standout 4-star recruit Tyler Bowers, an incoming freshman that has generated interest from head coach Brad Dancer since Bowers was younger. Having grown up in Bloomington, Illinois, Bowers has competed in tennis tournaments around Illinois in his Juniors career, and his talents have made him a longtime target for the team. On top of having the talents for this program, Dancer also believes Bowers is a great character fit for the team.

“Tyler’s fearless,” Dancer said. “That’s one of the attributes that stood out to me, he’s somebody that believes in himself and has fearless capacity to him so those are definitely qualities we want to associate with our program.”

Despite being just a freshman, Bowers is still viewed as a very mature player that’s ready to overcome any challenges he may face in his first season as an Illini. His hard work helped him achieve 2019 IHSA Team Champion status at University High, as well as 2019 IHSA State Doubles Champion with partner Thomas Moh. This championship background is beneficial to not only Bowers in his individual endeavors this upcoming season, but also to the team as a whole, as Bowers’ qualities will help to motivate the young core around him.

With another year of a young lineup, focus and discipline are a must for dancer’s unit. Bowers in his short time on campus has already shown he has what it takes, with Dancer already excited about his future player.

“One of my favorite things about Tyler is that he’s tough to reach,” said Dancer. “Tyler is someone that doesn’t live on his phone and I love that about him. He’s a great young man.”

Having a close bond with one’s coach is essential to being productive in any sport. Dancer has made it clear that Bowers has impressed him greatly, and a strong mutual respect is shared between them. Through Bowers’ close proximity to Illinois, the recruitment process has given Bowers and Dancer this close bond they have today.

Living a little under an hour’s drive away, Bowers has grown up a huge fan of the Illini. Through local tournaments as a younger player, he was able to meet coach Dancer and learn more about the university’s tennis program and learn what it takes to be a member of a successful roster.

“I grew up an Illinois fan from the moment I was born, it’s been my dream school for forever,” stated Bowers. “It was good for me over the years to be able to watch the team. The coaches have put in a lot of work developing players. It’s just a program that I want to be a part of.”

Having a lot of prior knowledge about Illinois played a huge role in Bowers’ decision to come to Champaign. Playing at Illinois, Bowers is excited to work hard to reach his full potential, both for his individual success as well as the team’s.

“I am ready for the opportunity that is being presented to me. I am ready to take full advantage of that,” Bowers said. “I look forward to being a part of a team that is constantly getting better.”

A lot has had to happen to get Bowers in the place he is today, however his collegiate journey is just beginning now. He’ll have to continue to work hard if he wants to reach his full potential, and the bond he shares with Dancer and the staff will only help him.

Just like any great athlete, Bowers has set goals for this upcoming season that he’ll be working hard to accomplish. It starts with being tough mentally, and from there, Bowers will keep playing the tennis that has gotten him to this point.

“I’m trying to become mentally better, I think that will benefit the team,” said Bowers. “Going forward I want to keep improving with my forehand and my mentality.”