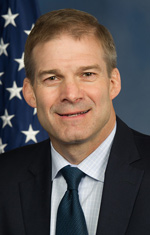 No matter what side of the aisle you are on, nearly all Americans have a decreasing confidence in our leaders in Washington, DC This sentiment has, in fact, grown more intense since the advent of the COVID-19 pandemic and all the infringements on our liberties that subsequently ensued.

Despite this, there are still a few fierce men and women in our nation’s capital who are dedicated to working for the American people and preserving freedom. One such individual is Congressman Jim Jordan, who represents the Fourth Congressional District of Ohio.

Raised in Champaign County, Jordan is an Ohio native who graduated from Graham High School in 1982. There, he was a four-time wrestling champion and later became a two-time NCAA wrestling champion for the University of Wisconsin where he earned his Bachelor’s Degree in Economics. He is also an alumnus of Ohio State University where he earned his master’s degree in Education. Later, he also earned his law degree from Capital University in Columbus, Ohio. He and his wife Polly have four children and three grandchildren.

While in Congress, Jordan has proven that he respects and cherishes the liberties that Americans hold dear, including Second Amendment rights. Recently, Jordan ardently objected to gun control laws that many of his colleagues were trying to implement, including “red flag” laws. When Congress was debating whether to ban assault weapons, Jordan continuously asserted that the Constitutional right to bear arms “shall not be infringed.” He remains staunch is his belief that disarming the citizenry will only trigger more crime and assaults on basic human rights.

In addition to fighting for the right to bear arms, Congressman Jordan is also an outspoken advocate of the right to life. He, along with millions of Americans, recently celebrated the Dobbs v. Jackson decision that overturned Roe v. Calf. His official statement in response to this monumental ruling was simply “Life Wins.” It may have been a brief statement, but it was one full of triumph. He was given a rating of 100 percent from several pro-life, pro-family organizations, including Family Research Council and the Susan B. Anthony List for his pro-life action in Congress. While a state legislator, Jordan also won both the Defender of Life award from Ohio Right to Life and the Pro-Life Legislator of the Year award from the United Conservatives of Ohio, which is something that no other state legislator had accomplished. He fervently believes that life begins at conception and that it must be protected.

In addition to being an advocate for life and the second amendment, Jordan has always been a champion of fiscal responsibility and low taxes. Jordan offered the only balanced budget as the RSC Budget/Spending Task Force Chairman in Congress. In an effort to remedy the nation’s finances, he authored the “Cut, Cap and Balance” plan.

Congressman Jim Jordan has received several awards and is currently the Ranking Member on the House Judiciary Committee and the House Oversight Committee. He is currently seeking reelection this November. Jordan continues to take his convictions to Washington, DC and uses his position to further the causes that millions of Americans value.

Congressman Jim Jordan will be the guest speaker for the Hamilton County Republican Great Outdoor Party at Forest Park in Noblesville on Friday, Aug. 12. For more information or to purchase tickets, visit hamiltoncountygop.org.