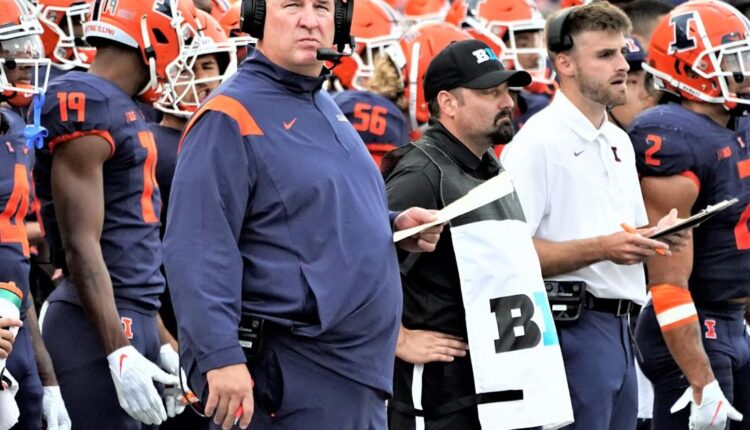 His team took a big step forward with a 5-7 record a year ago, which included a nine-overtime victory at Penn State and a win over Northwestern in the season finale.

Now, it’s time for the next phase of Illinois football — Season No. 2.

Illinois will be the 2022 campaign today at Memorial Stadium with a 3 pm contest against the Wyoming Cowboys, who went 7-6 a year ago including a bowl game victory.

“Very excited to get into game week,” said Bielema during Monday’s press conference. “Really excited for our players, our coaches, but just for Illinois football in general which obviously includes the University of Illinois, the Champaign-Urbana community and all of our fans and alumni.

“There is a really good buzz going on within our players — buzz doesn’t actually equate to wins but I do like the excitement, the energy, just the general feel of what our guys are doing.”

The biggest question all week leading into today’s game was who would win the starting quarterback position for the Illini.

On Thursday, Bielema announced that Tommy DeVito, a graduate transfer from Syracuse, had beat out redshirt junior Artur Sitkowski.

“Tommy’s had an incredible fall camp,” Bielema said on Thursday. “I would say Art is playing as good of football as we’ve been around him. The surgery he had and the rehab and all the things the doctors and trainers did has put him in a great position.

“I think Tommy has made a big jump from last spring to where we are. It’s just been really impressive to me how he’s handled the team. I’m not saying he’s Russell Wilson (who transferred to Wisconsin under Bielema) but when we got Russell, the transition he had to go from the offense he ran to the offense we ran at Wisconsin, I see a lot of those same things with Tommy.”

The Fighting Illini hope that DeVito along with first-year offensive coordinator Barry Lunney Jr. can improve a passing attack that ranked 121st out of 130 FBS teams in passing efficiency during the 2021 season.

In his four seasons at Syracuse, DeVito passed for 3,866 yards with 28 touchdowns and 12 interceptions as he completed 58.9 percent of his passes. His best year was in the 2019 when he threw for 2,360 yards and 19 scores, but injuries and a change in offensive philosophy led to him transferring after last season.

His play on the field has definitely caught the attention of his offensive teammates like leading wide receiver Isaiah Williams.

“He’s one of the most gifted passers I’ve ever seen. He’s up there with the best of them,” Williams said. “And he just brings a swag and confidence. He’s got that Jersey swagger. He brings that to the room. One thing I noticed about Tommy is that when things are down, he’s never down. He’s just like, ‘C’mon, bro. I got you. I’m gonna come back to you. Catch the next one.’ It’s always encouragement, and I feel like that’s what we need because it’s not always going to go right. But when you can have that one guy, especially at quarterback, who’s never too high, never too low and he’s even-keel, it’s special.”

Sitkowski will give Illinois plenty of experience at the backup spot. He passed for 704 yards and six touchdowns last season for Illinois, including helping Illinois win last year’s season opener against Nebraska as a backup.

While the passing game has been a big focus in the offseason, the Illini still figures to be a team based on the run attack with Chase Brown, a 1,000-yard rusher a year ago, returning along with Josh McCray, who rushed for 549 yards .

They will be running behind an offensive line that returns two starters in Alex Palczewksi, who enters his sixth season, and Danville native Julian Pearl, who is moving from guard to left tackle.

Danville native Caleb Griffin will also look to get some time as the team’s kicker.

“I do think we’re a better football team than we were going into fall camp a year ago on offense, defense and special teams,” Bielema said. “I don’t know if that’s going to correlate into more wins. I think their expectations and the understanding of what we’re seeing as coaches is at a higher level. I think there’s a buzz in that building.”

Today’s game is set for a 3 pm kickoff at Memorial Stadium. The game can be seen on the Big Ten Network and it can be heard locally on the Illini Sports Network including Danville stations, WDAN-AM 1490 and WDNL-FM 102.1.