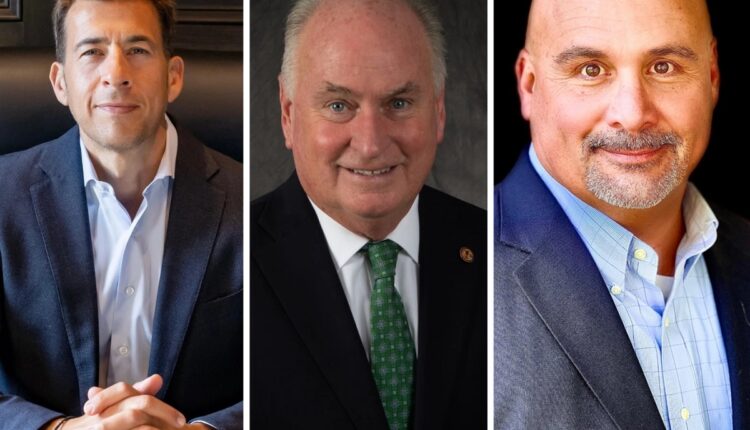 BLOOMINGTON — Illinois will soon have a new Secretary of State for the first time in nearly a quarter century.

Longtime legislator Dan Brady of Bloomington says he bided his time until Jesse White retired to run for the office. Brady faces Alexi Giannoulias, a well-financed opponent who is seeking his second statewide office.

Brady, a Republican, has served 22 years in the Illinois House. There are currently no Republicans in statewide office. Brady wants to change that by pledging to improve the customer experience at driver’s license facilities. He said it will take technology and possibly a staff reorganization to reduce wait times and frustration.

“Making the work environment a less confrontational and a more efficient area is going to help both sides of the counter,” Brady said.

Brady has proposed making vehicle title and lien filing electronic to speed up that process, too. He has another idea to reduce wait times at the DMV — lease space at nearby community colleges. He said the technology and accessibility are already there.

“Those are all built-in supported taxpayer assets that are there right now that we could tap into and that would be another area that I think would be an acute way to bring some relief to the problems that occur in the facilities across the state, Brady said.

Each Secretary of State candidate is hesitant to criticize Democrat Jesse White for the 24 years he has held the office, but they all suggest technology upgrades and other reforms are overdue.

Democrat Alexi Giannoulias is a former US Senate candidate from Chicago. He served one term as state treasurer from 2007 to 2011. Giannoulias said his plans to modernize the office go further than Brady’s, and include an option to schedule a DMV appointment online.

“When you cut foot traffic by 50-to-75% and there’s less paperwork as people are doing things virtually and online, you save an exorbitant amount of money,” said Giannoulias, adding the savings would come from shrinking the size and number of driver’s license facilities and trimming staff. He did not say how much staff he might cut.

Car dealers have their own trouble with DMV delays, according to a longtime auto dealer who is running for Secretary of State as a Libertarian. Jon Stewart of Deerfield is a former pro wrestler who ran for the Illinois House and US Senate more than 20 years ago. Stewart said he would look to add satellite DMV offices in Chicago to reduce congestion at existing sites.

“Taking the pressure off of (the) Elston Avenue (Secretary of State facility) in Chicago. Folks, if you haven’t been there, especially during COVID, it was like a third-world country food line. It was awful,” Stewart said.

Stewart said he would recoup the money by banning new Secretary of State hires from the state pension system. That would require legislative approval, a concept that would likely find little support from lawmakers.

Stewart also wants to reduce license and title fees and increase the title fee for dealers.

The Secretary of State’s office is largely administrative, but that doesn’t keep politics out of the race. Giannoulias said at a recent campaign event Republicans are “bananas” and has linked Brady to Donald Trump.

Brady took exception to any link to the former president. “Dan Brady is his own man,” Brady said. “For anyone to say I’m a Trumper or a this or a that, that’s the kind of thing that people like to put out to divide people, to mislead people.”

Giannoulias said he sees fundamental differences between the two parties. “On issues that are important to me, like integrity, choice, kids getting murdered in schools. I think there is a difference in the way the parties do it. Most importantly, when it comes to this office is the fight for voting rights,” Giannoulias said.

Giannoulias said he wants to pre-register 16- and 17-year-olds to vote when they get their drivers licenses, something that’s done in more than a dozen other states. Brady said local election authorities could take over motor voter registration, a move Giannoulias called “dangerous and ineffective.”

The Republican Party has done its own flame-throwing in this race. State GOP chair Don Tracy said putting Giannoulias in charge of the Secretary of State’s office would be like “putting an arsonist in charge of the fire department.” Tracy was referring to the Giannoulias family bank that federal regulators seized in 2010 over loans the bank gave to convicted felons.

The Secretary of State’s office regulates loan brokers and investment advisors in Illinois.

“I think somebody with the past my opponent has and has been well documented, I’m not sure that’s the person you want to hire for this job,” he said.

Giannoulias brushed aside the criticism as a sign of Brady’s desperation.

“When you are down double digits in the polls, you try and say whatever you can,” Giannoulias retorted.

Giannoulias has a major financial advantage in this campaign. Based on the latest filings at the end of September, Giannoulias has over $2.5 million in his campaign war chest, 10 times that of Brady. The Giannoulias campaign recently got $1 million from billionaire Gov. JB Pritzker. Brady has not found a deep-pocketed donor on the GOP side.

Brady noted he was outspent in the Republican primary, too, when he handily defeated the party’s chosen candidate, former US attorney John Milhiser.

It’s an entirely grassroots campaign for the libertarian Stewart, who also wasn’t his party’s first pick. Someone named Jesse White — not the Secretary of State — tried to run on the Libertarian ticket. Stewart claims the Giannoulias camp threatened to bankrupt the party with petition challenges, so the party found another candidate.

When asked about Stewart’s allegation, Giannoulias said he’d never heard of him, and he suggested putting another Jesse White on the ballot was a political stunt.

“I don’t think there should be an attempt to confuse people as to (whether) Secretary of State White is on the ballot or not,” Giannoulias said.

The Libertarian party hopes to get at least 5% of the votes in at least one statewide race. That would make it an established political party and significantly reduce the number of signatures candidates would need to get on the ballot.

If elected, Brady would be the first McLean County resident to win a statewide race since Robert Underwood was elected to the Illinois Supreme Court. Underwood was first elected in 1962 and remains Illinois’ longest serving chief justice (1969 to 1976).

Drug takeback day, Halloween events among Clark, Champaign things to do this weekend