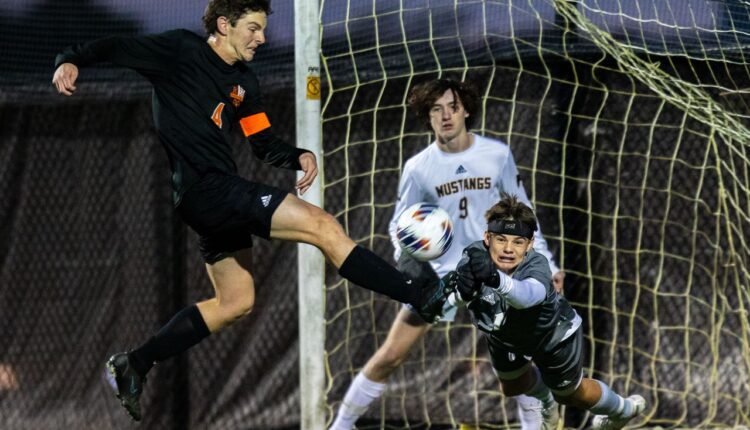 PORTAGE, MI – The state’s last undefeated boys soccer team added one more win to its tally and made history in the process, as Rockford edged Portage Central, 2-1, to capture the Rams first regional title Thursday at Portage Northern.

Brennan Karas delivered the game-winner with 3:59 left in the second half off a free kick from fellow senior Zenon Fedorowych on a play designed to give the Rams a numbers advantage deep in the box.

“And they finished, so it feels amazing.”

Karas’ historic goal – his first of the season – saw him crash the net after the ball left Fedorowych’s foot and get enough of his thigh on the ball to send it rolling past sprawling Central keeper Braydon Lancaster.

“I got a perfect ball,” Karas said. “It was a great feeling. With all the guys around me, I knew that one of us was going to put it in, so I had all the confidence that we were going to finish.”

Rockford controlled play for much of the first half, but Central struck first on its first sustained pressure of the game, as freshman Gavan Sherman gathered a ball from teammate Carlos Rangel and fired a quick shot from the 18-yard line into the upper 90 past Rockford keeper Tegan Gumbs with 21:15 left before intermission.

Sherman’s role increased late in the season after an injury to leading goal scorer Ben Meyers, and the rookie stepped up with some key goals during the Mustangs run to a SMAC Tournament title and a district crown.

“As a freshman, we knew it wasn’t going to do him any good to be on JV, and we told him, ‘Hey, I don’t know what we’re going to be able to offer you,’ but he just continued to work hard, started getting more and more minutes,” CentrAl coach Tim Halloran said. “He scored some big goals for us, and he could be very, very good for us.

“With Ben going down everyone had to pick up. I mean, we lost 13 goals, which, for us, was by far our biggest number, so I couldn’t be prouder.”

Rockford had several opportunities to tie the game throughout the first half, including a two-minute stretch with just over 10 minutes left that saw the Rams hit the cross bar after generating three corners and a free kick from just outside the box.

But they couldn’t quite finish those chances until Benjamin Battreall ran down an entry pass and put a hard shot on Lancaster, which allowed freshman teammate Aidan Flanders to punch home the rebound from the doorstep with 34 seconds left in the first half.

To see his team’s play finally rewarded with a goal was the turning point in the game, said Boelman.

“We just had to keep faith, in all honesty, because clocks tick down and seconds go by, and you keep looking at the clock and think, ‘Wow, this could go to overtime,’ or ‘This could go to half, and we’re down a goal,’” Boelman said. “You just have to trust the guys and trust the system. We didn’t go away from the game plan the entire night, and whether they were down a goal, tied or ahead, they stuck to the plan, and that’s what we asked them to do.

A big part of the reason why Rockford had trouble finishing plays was Lancaster, who compiled a stellar senior season after having his junior campaign cut short by a couple concussions late in the year.

With his fearlessness and 6-foot-3 frame, Lancaster controlled his box and made Rockford earn their two goals.

The veteran goalkeeper is one of nine seniors on Central’s roster for its 13-5-4 season, joining Rangel, Matthew Hawn, Evan Cooper, Tristen Spettel, Landon Busch, Blake Paige, Parker Damaska ​​and Meyers, who watched from the sideline with an injury.

That group has been through a lot with Halloran, including his cancer diagnosis and recovery last season, which kept him away from the team for an extended period, and the second-year coach credited their persistence, not only in sticking with the undefeated Rams for 80 minutes, but also in giving everything they had to the program during some uncertain times.

“I give them so much credit because they’re basically looking at their third coach in three years,” he said. “They could have kind of went, ‘Ah, whatever,’ but they got on board, they listened, they believed, they acknowledged the fact that we could play good soccer and still be good kids on the field… They’re a great groups of kids, but better people.

“I think we showed that we can compete at this level and be that good of people and do everything the right way.”

Rockford, which defeated Central 4-1 late in the regular season, remains the state’s last undefeated team at 21-0-1, and had to get there without their own leading scorer, senior Drew Bultman, who missed the regional final with an ankle injury he sustained during Wednesday’s practice.

“He goes up for a ball and steps on someone’s foot, rolls his ankle extremely hard,” Boelman said of Bultman. “He’s never really rolled an ankle much, so it’s just taking time to get back from that, but he’ll be back in a few days, and he’s already looking better after talking to the trainers, so we should see him back for Wednesday , but it’s good that we can still win important games with our bench.”

Rockford wants to take on the winner of No. 2 Detroit Catholic Central and No. 6 Clarkston in their Division 1 state semifinal matchup, looking to reach a state championship game for the first time in program history.

Boelman said it’s the chemistry of his current group that has allowed them to advance further than any other Rams team.

“Team chemistry – this is probably the best I’ve seen in the 14 years I’ve been here, as far as how they collectively work together,” he said. “In training sessions, they know when to get on someone and when to hug them. In games, they don’t really panic. They know they’ve been down before and again they can come back and win.

I think team chemistry is huge. On the bus, off the bus; on the field, off the field; decision-making. There’s a lot that goes into being a kid. Soccer’s fun, but there’s a lot of stuff going on outside of it that they have to deal with in life. When they’re here, they have a good time with each other, and they just love playing soccer.

“There’s not one player that has a Division I, II or III offer, but we’re the only team in the state that’s unbeaten, and we were one of the few that were ranked in the top five all year. We’re playing teams and beating teams that have multiple recruits, but we’re a family, and that’s what we’ve driven as a program, so that’s what they want to keep doing.”