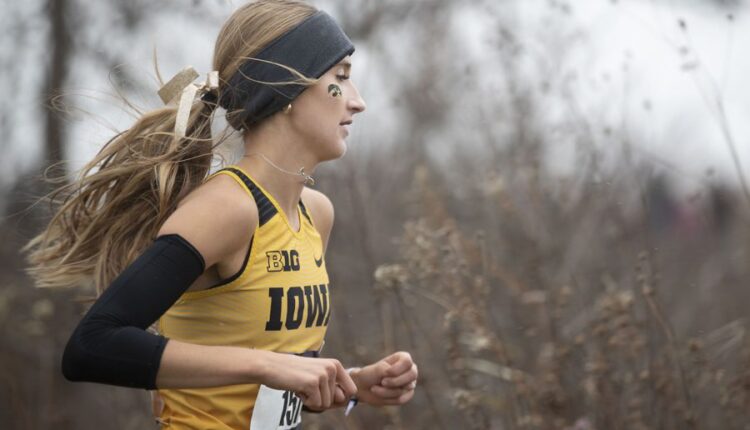 The Hawkeyes will head to Ann Arbor, Michigan, this weekend for their second race on the UM Golf Course this season.

Iowa’s Brooke McKee competes in the 6K race during the NCAA Midwest Regional on Friday, Nov. 13, 2021 at the Ashton Cross Country Course. McKee finished 62nd with a time of 21:47.56.

The Hawkeyes had six regular season meets to prepare for the conference championship. The women’s 6,000-meter race starts at 9:45 am while the men will follow with an 8,000-meter run at 10:45 am

Iowa will compete against some of the toughest competition so far this season, facing some of the best teams in the country.

The Iowa men will be racing against Wisconsin and Michigan, all of which are in the top five of the Great Lakes Region of the US Track and Field and Cross Country Coaches Association poll.

The women will race against teams like Ohio State, Wisconsin, Michigan State, Michigan, Indiana, and Purdue — all teams that are in the top seven of the Great Lakes Region in the latest USTFCCCA rankings.

Both Iowa teams, however, are highly ranked in the USTFCCCA Midwest Regional rankings. The men and women sit at 12th and 15th, respectively.

The Hawkeyes competed at the UM Golf Course earlier this season, as Iowa went to the Big Ten Preview in Ann Arbor on Sept. 9. Iowa found success on the course, as the men’s team placed third and the women placed sixth.

“We know where every single one of the markers is on the course,” Hawkeye junior Brooke McKee said. “It is a course where the hills are challenging and if you don’t really know what you are going to get, it could be a mental challenge.”

Iowa’s last meet of the regular season was at the Illini Open in Champaign, Illinois. Iowa took mostly underclassmen to compete in the event, and the women ran a 5,000-meter race while the men ran their typical 8,000-meter.

The Iowa men only had two runners competing. After Houg’s 15th-place finish with a personal-best time of 25:49.4, freshman Isaac Hartman crossed the line in 37th place for the Hawkeyes.