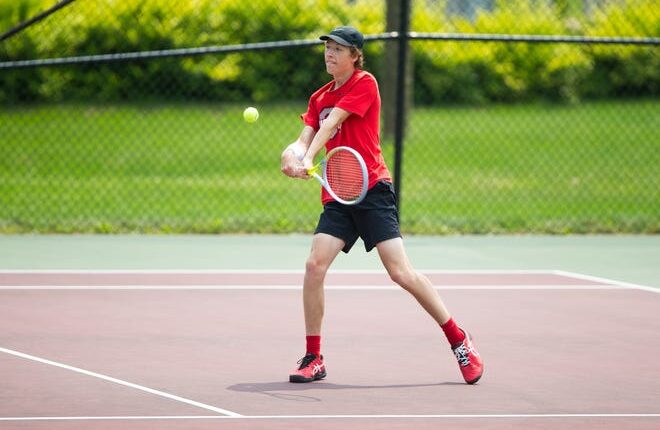 She also started a movement.

The first Rochelle city tournament in 2020 drew only 20 entries. Last year it almost tripled. “And that was just people,” Eckardt said. “They were in multiple divisions. There were lots and lots more matches.”

Area tournaments — period — have expanded. Rockford used to have three big tournaments for adults (the city tourney, Carter-Gates Classic and Northern Illinois Open) sponsored by the Rockford Park District and Rockford Register Star. But since the last of those tourneys went defunct 30 years ago, Freeport has usually offered the only adult tournaments in the area.

But once Rochelle got going, Janesville, Wisconsin and Sycamore also added tourneys last year. Janesville’s adult doubles event will be held July 23 at Palmer Park. Freeport will hold its singles competition July 23 and its doubles brackets July 24 in one of the longest-running tourneys in the nation.

Sycamore plans to hold its event Aug. 20 and 21 but may move it back a week if it can’t secure use of the Sycamore High School courts that weekend.

All four tournaments cost $25 or less to enter. Sycamore’s is free. The Sycamore, Janesville and Rochelle events are open to anyone while you need to live or work in Stephenson County to play in Freeport’s city tourney.

“The interest is up in all areas of tennis,” Eckardt said. “During COVID it was a sport you could play. The interest is there and people want to do it. It’s cool that more people are getting involved.”

Last year’s Rochelle tourney drew players from Sycamore and Rockford and had a bit of a festival air to it.

“It’s always so fun to see people playing tennis, knowing the game is still alive,” Eckardt said. “Seeing so many people come from all over the place was a cool thing to see.

“Having dealt with COVID the year before, it was the first big event for while for some people. It was so fun. Everyone was so glad to be there and playing. They didn’t care who won or lost. They were just glad to be there.”

Here are two reasons why adult tennis tournaments are sprouting up around Rockford, and also why Rockford doesn’t have any adult tourneys itself:

In golf, tournaments will put entrants in different flights to equal out competition. In tennis, there is a fear of getting blown off the court by someone much, much better.

“If you have divisions people feel safer that I belong here,” said Danny Beeman, the head pro at Boylan Indoor Tennis Center. “But it’s tricky to figure out how finely you chop up the competition. If you have a couple of really experienced players, a couple of senior players and a couple of juniors, all of a sudden you have three really small divisions. Trying to pull people together is a tough thing to do.”

Net sports:How this 72-year-old Rockford native became a star in the unique sport of pickleball

Freeport’s tourney — which started in the 1890s and has been held 106 years in a row since the 1916 tourney was called off “for lack of interest” — avoids that problem because long-time organizer Ed Schradermeier knows most of the entrants personally. He is somehow able to manage having recent college stars Preston Engel and Marius Dornhagen-Schradermeier play in the same draw with pre-teens and seniors and everyone still having fun, with the first-round losers dropping into a consolation bracket.

“I take my A and B players and put them in one draw, and I do a little manipulating in the draw to make sure,” Schradermeier said. “But you never know when you are going to get a surprise and a player is better than you expect. Usually I’m right, but not always.”

“My focus is kids right now,” Torrence said. “We used to have park district lessons and programs out there, so you had a pyramid for kids to build up. Now there is nothing. There is a dearth of programs for kids to do. For me, that’s the critical area right now.”

Since the Rockford Park District dropped its lessons program two years ago and FCTC closed down, any youth events run through Boylan. Beeman held a kids tourney at Harlem last month, but all of Boylan’s tours have been for lower-level kids so far. And there are no adult tours at Boylan.

“There is potential interest there, and it deserves effort,” said Beeman, who used to be the pro at FCTC. “The Play it Forward events at FCTC had shorter breaks and timed matches, so you could have the whole thing from 1 to 5 on a Saturday, whether you win or lose. They were popular. We did fill all of our spots for those events. I would love to get back to doing them, but we have to find the manpower to get it done.”

“There are a lot of different formats,” Torrence said, “that might work for adults.”

The area towns show that. Freeport, Sycamore and Janesville have bracketed events. Freeport plays 10-game per set. Rochelle and Sycamore had everyone play round-robin last year. Rochelle also played no-ad. The formats meant every tourney was played quickly with little waiting between matches.

“Everyone thinks winning and losing is what you come out with in a tournament,” Schradermeier said, “but it’s not about winning as much as it is about getting better. You can find someone different to play with. If you have additional people to play, you will play more often. If you play more often, you are bound to get better.”

Here is a rundown on the four local adult tennis tournaments this summer:

This is men’s and women’s doubles only, on the nine courts at Palmer Park. It began last year to honor Pat Ryan, a former standout player who died five years ago. The cost to enter is $25. Organizers will find a partner for you if you don’t have one. You can sign up at register at patryantennis.org. There is also a youth division on Friday, July 29.

“The Janesville Open used to be an institution before it lapsed in the 1970s and ’80s,” said David Ryan, Pat’s brother. “Janesville was a tennis powerhouse then. We started this with the goal of putting Janesville back on the tennis map.”

Top HS players:Meet the Rockford all-area boys tennis team and player of the year for 2022

The tourney is open to anyone. There are even entries from Italy and England this year.

“They just happened to be in town and wanted to play,” Ryan said. “We were thinking of calling it the Janesville International Open.”

Last year the event drew 80 kids to Friday’s youth tourney and 60 more for the adult event on Saturday. The entry form asks people their tennis rating to make it easier to bracket them. The owner of Lake Geneva’s tennis club runs the adult tourney, while the Wisconsin-Whitewater coach runs the kids event.

“The idea is to make it open to all levels,” Ryan said. “We want advanced players to have fun and have competition, but we also want beginners to get a taste of tournaments and competition. We don’t want anyone thinking tennis is too hard so they won’t insert themselves into competition. We’re very good at matching people up and keeping it fun.”

After drawing 10 teams for one day in its debut last year, the Sycamore event will expand to two days, adding singles the first day. There are no divisions in doubles, whether by age or gender. All teams are lumped together. The exact date is not set yet.

“It addresses the needs of the people who want a more competitive atmosphere and it also addresses the social aspect,” said tournament organizer Samantha Hathaway. “It’s kind of a wrapping-up party for the end of our summer season, something everyone can find enjoyment in.”

The cost is free — except for providing one can of balls.

“I don’t want any obstacles to people playing. We want as many people as we can get out there having a good time,” said Hathaway, who also helps run an informal tennis group that plays three times a week at 5 pm at either NIU or Sycamore High School, with anyone welcome to show up .

“The social aspect is a big part of it. I have formed a lot of friends just being a part of this group. But players in our group want a more competitive side of it, too. A few players were asking to have a tournament, not just come and play with anybody on our open play nights. I too have a competitive side. I thought it would be fun. It’s been a great success.”

Once Hathaway has the dates confirmed, she will post information on how to register at local libraries and send texts and emails to area players she knows might be interested.

To keep things moving quickly, Rochelle had each match play a predetermined number of games last year, no matter what the score was, with the standings decided by total games won in all matches. The more entrants in a division, the fewer games were played. Everybody played everybody in a round-robin format.

Rockford’s greatest baseball players:Our stories about all 12, all in one place

If the 10 high school courts are done in time, the tourney will be played there. If not, it will be at the downtown municipal courts. “Our fingers are crossed,” Eckardt said. “It would be nice to show off our brand-new courts.”

Singles are on Saturday, with men’s, women’s and mixed doubles Sunday. The tourney is held mostly at Read Park, with some matches if needed at the high school two blocks away. The cost is $10 for the first event entered and $5 for each additional event. To enter, call Schradermeier at 815-233-5550 or email him at [email protected] or simply show up to play at Read Park before 8 am July 23 (singles) or 8 am July 24 (doubles).

The one exception to players needing to live or work in Stephenson County is for people from nearby Monroe, Wisconsin. Freeport has a reciprocal agreement with Monroe for players from both towns to participate in each other’s tourneys.

That is fitting. For small-town tennis, the message is inclusion.

“I didn’t know other small towns were reviving it,:” Janesville’s Ryan said. “It sounds spontaneous. The whole area we think of as our audience. We are all in this together as tennis has lost some of its popularity.”

John Prabhakar, a retired surgeon who grew up in India, played in both the men’s doubles and 60-over doubles at Rochelle last year.

“It was nice to see so many people so enthusiastic about tennis,” Prabhakar said. “I came to Rochelle in 1974; that was the height of the tennis craze. We couldn’t get a court and we had nights to play at night. Now you can find a court anywhere. It was wonderful to see so many people competing and also enjoying each other’s company. And people of all ages, too. We had high school kids and also people of our own age. And it was all friendly competition.”