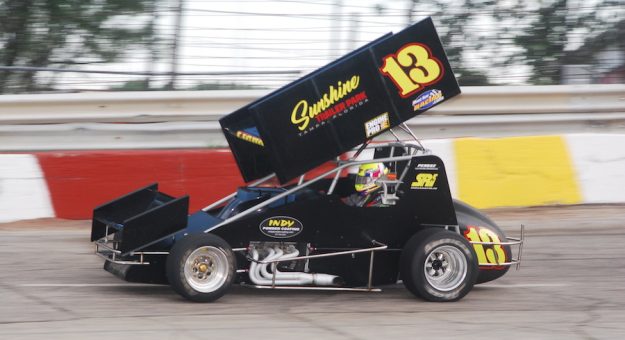 LOVES PARK, Ill. — Before Saturday night, Joe Liguori had never raced at Rockford Speedway. By the end of the night, it looked like he had visited the track on multiple occasions.

Must See Racing Sprint Series Presented by Engine Pro made its first appearance at Rockford Speedway since 2018. Jimmy McCune won that event nearly four years ago on a last-lap pass of Charlie Schultz.

Liguori was the night’s fastest qualifier when he ripped off a 11,732-second lap around the high-banked quarter mile despite it being his first time at the track.

A 7 was the number drawn for the feature inversion. At the drop of the green, veteran Tom Jewell got the jump on outside front row starter Adam Blitz.

Jewell would lead the first four circuits before surrendering the lead to Jacob Dolinar. On lap 13, Dolinar and Schultz would make contact exiting turn two while battling for the lead. Unfortunately, Dolinar would come to a stop and have to restart at the tail.

When the green flag waved again, Jimmy McCune became the new race leader before Liguori took command a lap later. Liguori would survive a couple of double-file restarts that saw Schultz and Jimmy McCune lined up next to Liguori. Liguori would get the jump both times to remain in control.

“I knew lapped traffic was gonna be really big,” explained Liguori. “This track has two lanes, I changed my line but their just really narrow. You just gotta be methodical. I played with my wing a little bit. We were tight at one point. I got free and put the wing where the car felt neutral. I changed my line and did what I had to do to be fast. Once you get into clean air you can control the race.”

The real skinny on obesity in the workplace | H. Dennis Beaver | Commentary