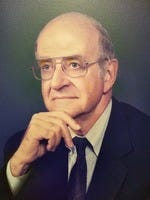 dr John W. Seidlin’s boundless curiosity and learning over 97 years was last piqued on July 12, 2022. Born on May 3, 1925 in Brooklyn, New York, John grew up in Alfred, New York, the only child of two college professors (Joe and Ada) who fostered his life-long need to know how everything worked. Drafted after a year of college, John fought in World War II across France, Belgium and into Berlin as a member of the 3rd Army (when asked, he would gladly share stories about his time there). Upon returning home, he graduated from Alfred University, and then the University of Rochester (New York) Medical School. While a resident in Obstetrics and Gynecology in Buffalo, New York, he met a young nurse, Joanne (another only child), who became his wife of 65 years. Married in 1957, John and Joanne embarked on a two-month honeymoon tour of the US before settling down in Rockford, Illinois. There, John started delivering babies – lots of them – over 7,000 in almost 50 years. Along the way, he taught hundreds of medical students how to do the same as a member and chair of the OB-Gyn service at the University of Illinois Medical School at Rockford. He also introduced to Rockford innovations in ultra-sound and amniocentesis procedures.

John and Joanne teamed-up to lead and show their two sons, Jon and Joe, how to lead full, fun and always interesting lives. They built their home overlooking the 3rd hole at Mauh-Nah-Tee-See Country Club in 1970, and loved it for over 50 years before reluctantly leaving to be closer to family. They traveled the world, from Europe to Australia to China. They made their winter home on Lido Beach, Florida, for almost 30 years, and enjoyed being a family vacation destination. They organized annual family vacations for the entire Seidlin clan, mostly to Hawaii, but also to Mexico and aboard cruise ships. It was so important to John to have the entire family enjoy vacations together. They lived and (more often) died in their love of the Chicago Bears, dutifully attending all home games from 1985(!) to 2001. But really, any family member’s college or favorite team became John’s favorite team as well.

John reveled in his pride over his and Joanne’s two sons: Jon, a physician and surgeon at Highlands Ranch, Colorado; and Joe, a lawyer and then judge in Des Moines, Iowa. He was equally proud of watching his grandchildren, Henry, Alex, Grace and Ben grow up and then flourish as young adults. He was thrilled to be introduced to and hold his great grandson, Neal, just weeks ago.

A family memorial is planned. Wishes and remembrances may be expressed at www.HamiltonsFuneralHome.com