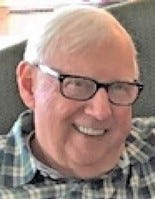 Lee graduated from East High School in 1962, then attended the Milwaukee School of Engineering where he earned his BS Degree in Electrical Engineering. He retired as Vice-President of Engineering after working for WA Whitney for 42 years. Lee was a traditional man who loved going to Minocqua, WI, that was started by his parents as a small child. He enjoyed traveling, scuba diving as a member of the Rockford Divers Association, and boating. Lee traveled to 17+ countries, with his favorite location being Estes Park, CO in the Rocky Mountains. He liked working on his 1979 MGB, riding on his Harley, cruising in his Porsche and driving in comfort in his Lexus. Lee was a long-time member of the British Boots and Bonnet Car Club, serving as President multiple times, in addition to being a member of the Harley and Porsche Clubs. Lee loved spending time with his family, including his dogs (Lucy, Sparky, Baylee, Myla), watching Formula One racing, and relaxing on his tractor mowing his 5-acres.

Lee was a long-time supporter of St. Jude Children’s Research Hospital. In lieu of flowers, memorial contributions can be made to St. Jude’s in his honor.