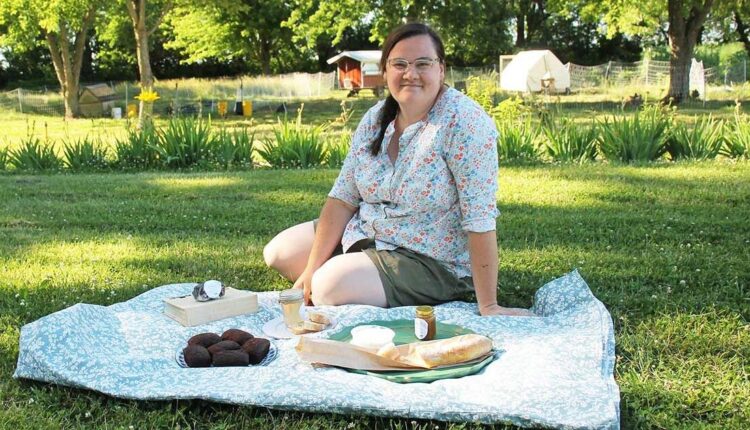 BLOOMINGTON, Ill. — Kelly Lay is the person you ask for advice about how to control slugs in a small garden, for an exotic recipe that includes spruce branch tips, or how to navigate the Illinois Cottage Foods Act.

She worked with Illinois Stewardship Alliance as it helped change the Illinois Cottage Food laws to bring more opportunities for local producers and consumers.

And she mentors new growers including Kyan Glenn, a former pastor and urban transplant to central Illinois who started The Table Farm & Workshop.

Lay started her new job as the local food programs manager at The Land Connection in May. It’s a local food systems advocate and facilitator based in Champaign, Illinois.

“I have a great passion for it,” she said.

Lay says she learned a lot by doing, sometimes on her own or working with other farmers including at PrariErth Farm, an organic farm in Atlanta, Illinois.

Sometimes she learned things that led her further into her career, for example, early on when she was making jams and jellies to trade and sell.

“I didn’t realize it was illegal in Illinois to sell the things I made,” she said.

So she learned about the Illinois Cottage Food Act and became an advocate in updating it so small producers could sell their products in outlets other than farmers markets. Those changes have helped many selling products in a world forever changed by the pandemic.

She continues to advocate for food and the people who produce it. That may mean answering questions about growing things or helping people navigate how to work with the health department.

“I grew up moving. My dad was in the Air Force,” she said.

But the family had roots that would call them home to Princeton in northwestern Illinois where her grandparents had a truck garden and raised rabbits.

She visited her grandparents during the Bureau County Fair season, preparing pies and other entries for the event which has been the entertainment center of the community for more than 160 years.

She comes from a family where if someone was short of food, everyone would gather with food to share, she said.

The family recipe book her mother made is a treasure, Lay said. Photos of weddings, birthdays, holidays and summer gatherings are scattered among the treasured family recipes. It contains a recipe for naturally dying Easter eggs with photos of children doing it.

“My mom did this,” she said showing the well-loved, aging photo and recipe book.