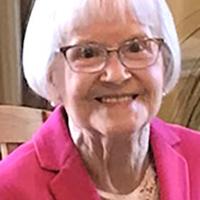 Loretta Irene McBroom, 97, of Peoria, Illinois, formerly of Derry, passed away Wednesday, Nov. 2, 2022, at the Richard L. Owens Hospice Home in Peoria with her family by her side.

Loretta was preceded in death by her parents, brother Leroy and sister Martha Belle McBroom.

Loretta was a longtime parishioner of St Joseph Church, Derry, and St Vincent Basilica, Unity Township. Loretta was a devoted wife, mother, daughter and grandmother who always had a positive and cheerful attitude.

Loretta and Jim were successful and admired business owners in the Derry and Latrobe area, owning McBroom Feed and Supply, McBroom Farm and Garden Center, Garden of Treasures, and the McBroom Ridgeview Turkey Farm.

Loretta won numerous retail marketing awards and was featured in several industry periodicals. Loretta was well known for her beautiful spring flowers at the McBroom Garden Center that brought customers from near and far. Loretta and Jim’s retail award achieves them earned worldwide trips to China, Europe, Australia, South America and the Middle East including the Holy Lands. As a couple, they enjoyed their association with St Vincent College and traveled on alumni excursions with their St Vincent friends. Well into her 80s, Loretta continued to stay busy and enjoyed volunteering at the Westmoreland Museum of American Art, Greensburg.

Loretta was a gracious and an enthusiastic hostess whose parties were always fun whether they were at her farm in Derry or at her home in Wimmerton. Loretta’s joyful outlook earned her the nickname “Sweet Loretta.” Loretta’s bright smile will be missed by her family and the many friends who came to love her throughout her well-lived 97 years.

A funeral mass will be celebrated on Saturday, Nov. 12, at St. Vincent Basilica, Unity Township, with the Rev. Stephen West as celebrant.

Memorials for Loretta can be made to her favorite charity, St. Jude Children’s Research Hospital, or to St. Vincent College.

Chelsea Handler, Christmas Market, things to do in Rockford Illinois