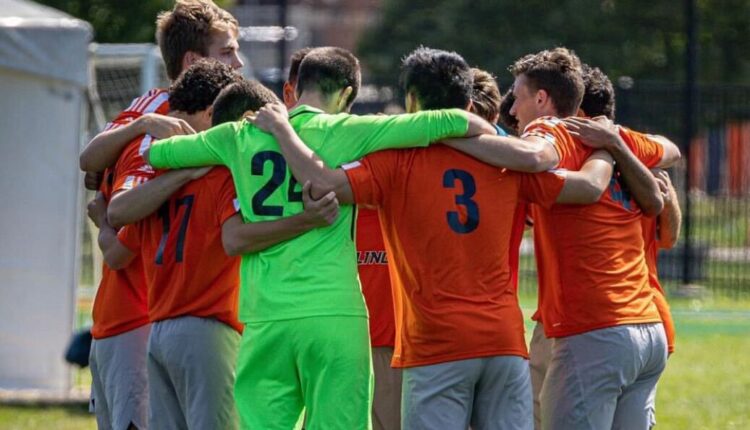 In the absence of a Division I men’s soccer team at the University, Illinois men’s club soccer has taken the role of the school’s premier men’s soccer program on campus. With a history of achievements spanning both regional and national levels, Illinois has continued to boast one of the top club soccer programs in the area, one where winning is not just a goal, but an expectation.

Throughout the years, Illinois men’s club soccer has maintained very high standards. The Illini’s success is evident in the titles they’ve won, winning two regional titles and one national title since 2006.

The 2021 fall season saw Illinois continue to achieve. The Illini were undefeated in the regular season, scoring 40 goals across nine matches. The team finished with eight wins and a draw and finished no. 2 in the regional power rankings for their highest finish in program history. Among these victories were some incredible score lines, including a 6-0 win against Bradley, an 8-0 win against Valparaiso and an outstanding 10-0 triumph over Northern Illinois. The Illini did not hold back this past season and dominated opponents left and right.

Illinois then went on to compete at the regional tournament, where it advanced all the way to the semifinals. The Illini would miss out on the title game after a 2-0 defeat to the Wisconsin Badgers, but the team managed to qualify for nationals and made it to the quarterfinals there.

Illinois men’s soccer continued to show why it has been one of the strongest club teams in the Midwest Alliance Soccer Conference, but in order to keep the program playing at an elite level year after year, the process starts on day one by selecting the best players for the roster.

“It’s really competitive from the get-go,” said junior club president Andrew Kuhn. “About 150 people try out each fall, and there are three to four days of continuous cuts. In the fall — our main season — we’re practicing three to four times a week with one to two games on weekends. It’s a pretty big commitment.”

Kuhn joined the program his freshman year, and plays as a center-back for the Illini. In becoming president of the club this past year, Kuhn is well aware of the program’s illustrious history as well as what it takes to win matches at this level.

“Historically, we have a really strong program,” Kuhn said. “Nationals is always our goal, that’s usually the expectation every year. It’s just how it is, it’s what I learned coming into the program as a freshman. It’s really competitive, but the group of guys that we have, everybody works hard for one another. It’s a great team to be a part of, everyone has your back and it’s a great environment.”

Mentioned previously, the lack of a Division I men’s program at Illinois sees the club team take on the mantle in terms of playing the highest level of men’s soccer at the University. It’s safe to say the team has been doing very well in representing Illinois, but the absence of a true Division I men’s program is something that the club team not only thinks about, but also uses as motivation when competing.

“I would say there’s a little bit of a chip on our shoulder,” Kuhn said. “Some people seem to think that makes our club team more competitive than other Big Ten schools. I think it could go either way. Because we are the top level of men’s soccer here on campus, I think a lot of different teams that might be in a similar position would kind of step back and be okay with that. However, we use that as fuel to keep working hard to represent the school as best as we can.”

Across all sports, building and maintaining a winning culture is difficult even at the Division I level with professional level staff and facilities. At the club level, the men’s soccer program has been largely without any outside adult involvement. While Kuhn recalls having a coach during the 2019 season, it was “the only year that I know of in a long time,” and the program hasn’t had one since.

Success is a prestigious commodity sought by all and achieved by few and although the lack of guidance and supervision from coaches and adults is a setback for others, the Illini lean into it.

“It comes through the leadership,” Kuhn said. “(The program) is entirely student led. Last year our president, Charlie Gainer, did a really good job of organizing the team and running practices. There are usually a few individuals who step up with the organizational side of things, but really everyone on the team is responsible for showing up, it’s a group effort.”

Kuhn will be entering his senior year this coming fall, and in reflecting on his three years playing for Illinois men’s club soccer so far, he’s found the most valuable part of the experience to be “continuing to compete on a team.” With the players all sharing a close bond with one another on and off the pitch, it is an experience that Kuhn continues to appreciate and cherish.

“A lot of people, especially at a big school like Illinois, grew up playing a sport,” Kuhn said. “I think we’re really lucky to keep going out every year and being able to practice at a high level everyday. Getting to be part of a team and compete with one another, it’s really special.”

Prices at the pump remain the same in latest gas report