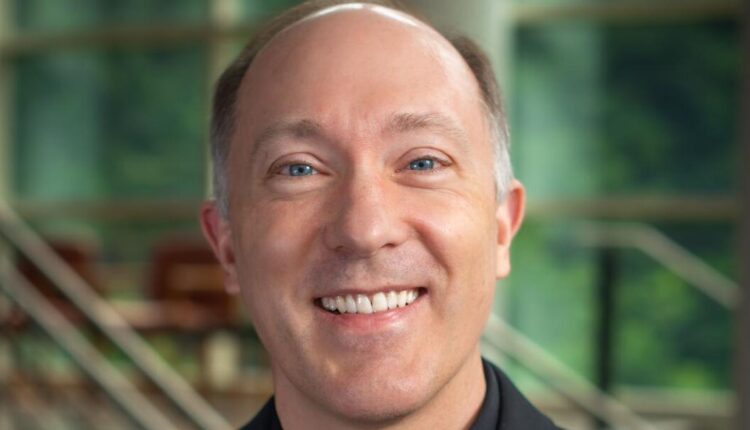 CHAMPAIGN — Kevin Geraldi can still recall sharpening his trombone skills in the rehearsal room of the Harding Band Building under the tutelage of University of Illinois Professor Elliot Chasanov during an Illinois Summer Youth Music camp session.

Did Geraldi ever imagine his next return to those walls would be for a job interview?

“No, not in a million years,” he said. “It was a little surreal to walk back into that space and feel that full circle rotation of life.”

Now an accomplished conductor and educator coming off 17 years at the University of North Carolina at Greensboro, Geraldi has been appointed as the seventh UI Director of Bands.

In that case, he’ll take over for departing Director Stephen Peterson. Geraldi will conduct the renowned Illinois Wind Symphony and guide the School of Music’s graduate wind conducting track as an associate professor, while serving in the band program’s top administrative role.

The history of the UI’s “legendary and illustrious” college band program, the first of its kind in the United States, is not lost on Geraldi.

“It always has the band world’s attention,” he said.

Neither is the passionate culture of the Big Ten; Geraldi obtained his master’s and doctorate in conducting at the University of Michigan.

“Something that’s really exciting to me is the tremendous support of the alumni,” Geraldi said. “The relationships people have with the U of I band program last a lifetime and extend far beyond the walls of the School of Music, or the walls of the Harding Band Building, but out and beyond into so many communities throughout the state of Illinois. ”

When Geraldi and his family move to Champaign in July, he’ll be far nearer to his roots: he grew up in the western Chicago suburb of Elmhurst, where his parents still live.

“The opportunity to return to my home state, work with great students and colleagues in such a historic program, give back to the state musically through my teaching and to move closer to all my extended family, it’s something that immediately resonated with me,” Geraldi said. “Right now, the drive back home is about 15 hours — the difference of being a two-and-a-half hour drive away on Saturday morning is going to be really great.”

“My earliest memories were going to visit his school, watching him teach his students and make an impact on them,” Geraldi said.

(For the record, one of the his dad’s trumpet students was a young Beth Peterson, who later co-directed the UI band program and conducted the Illinois Wind Orchestra until her departure this semester with husband, Stephen. Small world.)

After graduating from York High School and playing trombone in the Illinois all-state band, Geraldi earned his music education degree from Illinois Wesleyan University, studying conducting under Steven Eggleston. The broad, collaborative nature of the discipline clicked for him.

“More than anything else, I realized that I really enjoyed connecting with as many people as possible in making music,” Geraldi said. “As a conductor, when I’m in front of anywhere from eight to 80 musicians, there’s something very rewarding, fulfilling and compelling when so many people come together as a community for a common purpose.”

Geraldi joined the UNC Greensboro faculty in 2005, where he became director of instrumental ensembles and conducted the Wind Ensemble, Symphony Orchestra and Casella Sinfonietta. Before that, he taught at Lander University in South Carolina, and taught briefly at Westchester public schools.

Over the years, he’s kept up appearances as a guest conductor, including gigs with the Xinghai Conservatory Symphony Orchestra in China and the Union Musical de Roquetas de Mar in Spain.

At the UI, he’ll oversee the operation of the School of Music’s classical bands. He’s crossed paths many times with his predecessor, Peterson, in professional capacities, and they’ve grown closer over the last few months as his hiring played out, he said.

As for the transition to CU, Geraldi said he’s had some great recent visits to local neighborhoods and restaurants with his family. He’s looking forward to performances at Krannert Center, working with “fantastic” students and attending lots of sporting events.

“I’ve had a really fruitful 17 years at UNC Greensboro with great students and great colleagues, and I appreciate all that we’ve shared together,” he said. “I’m looking forward to creating that in a new place with new people, and to being able to return to Illinois.

“Not everybody gets the opportunity to actually go home again, and it really feels that way.”