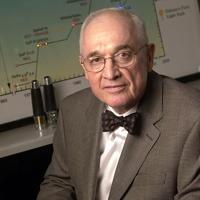 Holonyak is credited with the development of the first practical visible-spectrum LED, now commonly used worldwide in light bulbs, device displays and lasers.

According to the University of Illinois, he received his bachelor’s, master’s and doctoral degrees at Illinois. He then worked for Bell Labs, the US Army Signal Corps and General Electric before joining the U. of I. faculty in 1963.

While working at General Electric, on Oct. 9, 1962, Holonyak demonstrated the first visible-light-emitting diode. While infrared LEDs previously had been made of the material gallium arsenide, Holonyak created crystals of gallium arsenide phosphide to make an LED that would emit a visible red light.

More recently, Holonyak developed a technique to bend light within gallium arsenide chips, a development allowing computer chips to transmit information by light rather than electricity.

“We have lost a legendary member of our Illinois family, who quite literally led everyone to see the world in a new and better way,” Chancellor Robert J. Jones said.

Holonyak is survived by his wife, Katherine, to whom he was married for more than 60 years.

Among his numerous awards are the Queen Elizabeth Prize for Engineering (2021), National Academy of Engineering’s Draper Prize (2015), the Lemelson-MIT Prize (2004), the Global Energy Prize from Russia (2003), the Institute of Electrical and Electronics Engineers Medal of Honor (2003), the Japan Prize (1995), the National Academy of Sciences’ Award for the Industrial Application of Science (1993) and the Optical Society’s Charles Hard Townes Award (1992).