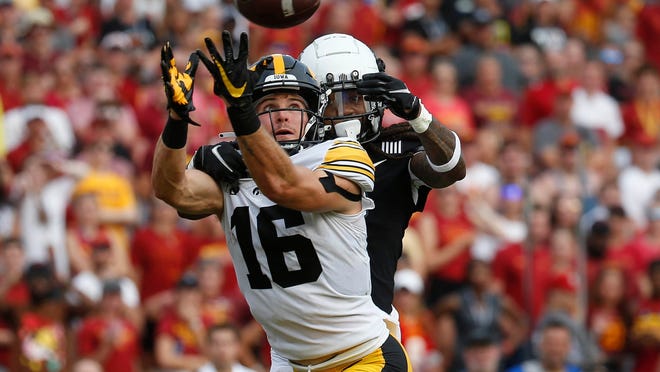 The college football season is around a month away.

And there’s plenty of optimism in Iowa City.

Iowa football finished last season 10-4, earning a trip to the 2021 Big Ten Championship and an appearance in the Citrus Bowl. The Hawkeyes return many starters on both sides of the ball, too.

Here’s a look at Iowa football’s schedule, opponents, TV information and more ahead of the 2022 season:

A look at Iowa football’s 2022 schedule

Iowa opens its season with an FCS powerhouse. The Jackrabbits made the FCS playoffs 10 seasons in a row, most notably appearing in the national championship game in 2020. Keep an eye on running back Isaiah Davis and quarterback Mark Gronowski. Davis ran for 701 yards and seven touchdowns (7.4 yards per carry) last season in just seven games. Gronowski redshirted last year due to injury but was the Missouri Valley Conference Offensive Player of the Year as a freshman in 2020.

Can the Hawkeyes win seven in a row against the Cyclones? Or is this the year Matt Campbell gets his first Cy-Hawk win? Iowa State will trot out Hunter Dekkers as the presumed starting quarterback as Brock Purdy’s replacement. The Cyclones return Will McDonald IV, the program’s all-time sack leader, too.

Ken Wilson’s fourth game as Nevada’s head coach will be in Iowa City. With star quarterback Carson Strong’s graduation, the question of who the Wolf Pack will utilize at quarterback remains up in the air. Do-it-all tailback Toa Taua returns, and he accumulated more than 1,000 yards from scrimmage last season.

When: TBA on Saturday, Sept 24

The last time these two teams faced each other, it wasn’t close. And it’s a game the Hawkeyes and their fans would love to forget. Here’s one note of optimism: Iowa has won its last four games against Michigan inside Kinnick Stadium, including a 14-13 win in 2016.

When: TBA on Saturday, Oct. 8th

The Hawkeyes have won 13 of the last 14 meetings between these two teams, and it hasn’t been that close. Iowa’s scored 33 points or more in four of the last five meetings, including a 63-0 shutout in 2018. If there’s a bright spot with head coach Bret Bielema’s team, it’s defense; the Illini held opponents to just 21.9 points per game last season, which ranked sixth in the Big Ten last year, just behind Iowa.

From 2021:Iowa football instant analysis: Another ugly, but satisfying, win for the Hawkeyes vs. Illinois

It’s been a minute since these teams clashed, but the last meeting was one Hawkeye fans definitely remember. Aside from that, though, Iowa’s struggled against Ohio State. The Buckeyes won 13 of the last 15 meetings dating back to 1992 and boast a 46-15-3 all-time series advantage. Ohio State is lead by CJ Stroud, a preseason Heisman Trophy hopeful who threw for 4,435 yards and 44 touchdowns as a redshirt freshman in 2021.

Since 2017:Leistikow: Young Hawkeyes grow up in historic rout of Ohio State

Iowa’s Homecoming game comes against an opponent that the Hawkeyes have struggled against as of late. Northwestern has won four of the last six meetings between these two schools. Running back Evan Hull (1,273 yards from scrimmage, nine total touchdowns) is back after earning honorable mention All-Big Ten honors last season, but plenty of questions remain with the offense overall.

When: TBA on Saturday, Nov 5

Jeff Brohm’s Purdue offense seems to always give Iowa’s defense fits. And now, two former Hawkeye wide receivers are set to help the Boilermakers’ offense in 2022; Tyrone Tracy Jr. and Charlie Jones both transferred to Purdue this offseason. Purdue has won four of the last five games, including two in West Lafayette.

More:Leistikow: Thoughts on Charlie Jones’ departure and how Iowa football will replace him

The last time Wisconsin came to Kinnick Stadium, Iowa took care of business. But that has not always been the case in recent history. Since 2010, the Badgers won eight of their 10 meetings with the Hawkeyes. Braelon Allen will be the man to watch this season in the Badger backfield. Last year as a freshman, he totaled 1,268 yards and 12 scores.

The battle for the Floyd of Rosedale will take place in Minnesota this year. So far, Floyd has spent the last seven seasons in Iowa City. Iowa’s won four of the last five in Minneapolis, including a 35-7 win in 2020 that resulted in Kirk Ferentz’s infamous quote: “Figured we’d take Floyd with us and leave the timeouts here.”

More:Yes, Iowa football and Minnesota play for a pig. Here’s what to know about Floyd of Rosedale history

Iowa’s regular-season finale comes with a chance to win its eighth straight game against Nebraska, which is led by fifth-year coach Scott Frost. The last four contests have been close, with the Hawkeyes winning each contest by an average of 4.75 points — but that’s an area Nebraska struggled in as of late. Since 2018, the Huskers have lost 18 games by seven points or fewer and won just five. Iowa overcame a 21-6 deficit last season, scoring 22 unanswered points en route to a victory inside Memorial Stadium. Quarterback Casey Thompson transferred from Texas to Nebraska this offseason, giving Frost some proven talent behind center.

More:Looking back at Iowa football’s win over Nebraska in 2020, which featured clapping complaints

Adam Hensley is a digital producer with the USA Today Network. You can follow him on Twitter @A_Hens83 or reach him at [email protected]

‘An Arm and a Leg’: Her Bill for a Prenatal Test Felt Like a ‘Bait-and-Switch’ Scheme