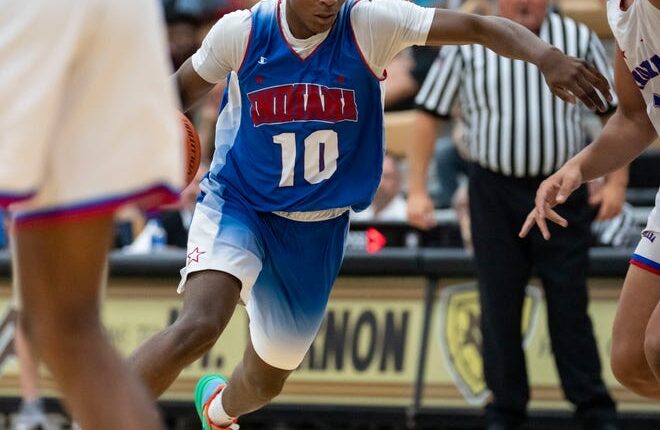 MISHAWAKA ― Penn boys basketball coach Al Rhodes annually schedules his team a tough summer schedule. But this year’s, in terms of time demand, practices and games, has been on another level.

Rhodes said he looked for games against schools from the Indianapolis area. The Kingsmen went to Purdue for a shootout, and also played in the Charlie Hughes tournament down in Indianapolis. Rhodes wanted to see how his team would stack up. In his eyes, they passed with flying colors. But nobody on Penn’s roster benefitted more, turned more heads and opened more eyes that upcoming senior guard Markus Burton.

Burton had been a hot name in northern Indiana after his breakout junior season this fall. He’s continued his hot stretch throughout the summer, especially down in Indianapolis in wins against Carmel, Mt. Vernon and 4A champion Indy Cathedral, where Burton scored 35 points.

Burton played like a guy that belonged, not just that night, but throughout the entire tournament. Along with his big game against Cathedral, Burton also scored 28 points against Carmel.

“Everyone I talked to was extremely impressed about the way he played and competed,” Rhodes said. “We are hoping that turns into more scholarships for him.

“Individually, we are building around him. That weekend, he played extremely well in all facets of the game.”

Burton’s recruitment slowly began to blossom during the past season. He picked up his first college offer from local Bethel in later January. And his first Division I offer came from Indiana Purdue (Fort Wayne) in early March. Since the beginning of June, Burton has added nine others from Drake, to University Illinois-Chicago, Ball State, Appalachian State, Missouri State, Miami (Ohio), Western Michigan Southern Illinois (Edwardsville) and Southern Indiana.

“I’ve just been taking it all in,” Burton said of his blown-up recruitment. “Staying humble, staying on a dime and not getting too big-headed.”

For Burton, this felt like the inevitable. Last year, he set a single-season program points record with 734, averaging a team-high 27.2 points per game while adding 5.6 assists, 3.6 steals and 6.3 rebounds and played on the Indiana Junior All-Star team. He was too good not to be highly recruited, but it just took some time.

“I feel like last summer was hard to get noticed because of COVID,” Burton said. “I feel like this summer it’s been way easier.”

There are some big name schools calling, too. Rhodes said he has taken calls from coaches at Michigan State, Michigan, Ohio State and even Notre Dame, who is taking notice.

“Coach Brey was at the game (against Cathedral. The Irish are also recruiting bookers),” Rhodes said. “I thought he was impressed by what Markus did. They told me they are keeping an eye on him through the rest of the EYBL (Nike AAU Circuit) and will make a decision down the road.”

Notre Dame has a recent history of taking local kids, most notably Mishawaka Marian’s Demetrius Jackson, South Bend Saint Joseph’s JR Konieczny and South Bend Riley’s Blake Wesley, who was just selected in the first round by the San Antonio Spurs in last month’s 2022 NBA Draft . Burton said he’s dreamed of being the next local kid to join that list.

“They (Notre Dame) are in the process with everything,” Burton said. “Just waiting and staying patient. It would mean a lot to me, knowing I am a hometown kid, going to a big school like that. I have always wanted to play for Notre Dame.”

Rhodes has been through this process with his players numerous times during his long coaching career. His goal for Burton is to assist in finding him the perfect school before the season starts.

Then, Burton can try to help Penn reach Gainbridge Fieldhouse next winter.

“I just want him to keep being the great team player that he is and lead us to a state championship,” Rhodes said. “That would certainly solidify his legacy at Penn and create more college opportunities as well.”