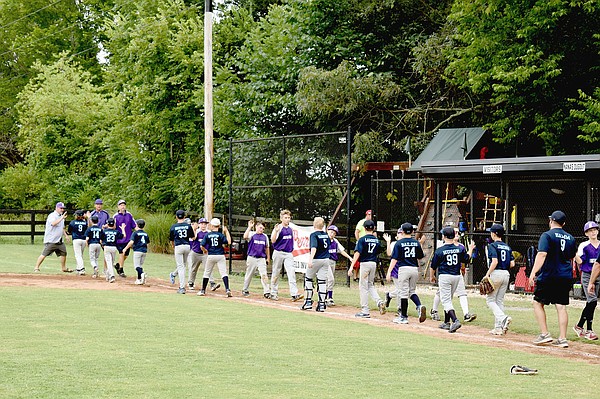 The disease affected his wife, Pat, and although Perronni misses her companionship he’s faithfully carrying on a fight to combat the disease. In quiet moments Perronni sits in the dugout.

Like many youth Perronni grew up playing baseball. He played little league in Springfield and Bloomington, Illinois. He threw well enough to pitch effectively, but that was about the extent of his game.

“I couldn’t hit worth squat, but I could throw the ball straight and hard and that was all that was required in those days,” Perronni said.

After playing from ages 8-to-10 the family moved. Although he never played again a deep appreciation for the sport stayed with him.

“There’s something about America and baseball, at least for me,” Perronni said.

He decided to capitalize upon that three years ago when the first fundraiser brought in $1,700, and began plans to establish an annual tournament. Last year $3,000 was raised and teams were thrilled to play in a picturesque rural setting on the family property.

“They made sure they let me know they enjoyed it and wanted to come back,” Perronni said.

One organization, the NWA Sox, fields multiple teams in the tournament and works closely with Perronni.

“We’ve kind of become a little of a partner with them,” Perronni said. “Two of their teams are even practicing here.”

Wing also sees the relationship developing as sort of a partnership in nature.

“They fell in love with Sam’s field,” Wing said. “The first three years we’ve had the same age group, just working their way up. When we get to next year we’re going to add a younger age group.”

Perronni doesn’t dwell on the downside.

“It’s really turned out to have caused much more of an impact than I ever imagined,” Perronni said. “I get little notes from them, little letters from these kids telling me how much fun they have playing out here.”

The field in a rural setting utilized for fundraising inspires others.

“They may not have a baseball field, but they can do something like it,” he said.

“First of all we feel blessed to be able to play in it and raise money for Alzheimer’s research. It’s our second year together with the same exact team and we’re getting to see what continuity can do,” Huson said.

The Sox-Huson defeated the Arkansas Legends, 4-2, and the NWA Sox-Pruitt, 10-5, on Saturday in pool play, then beat the NWA Sox-Pruitt again Sunday, 6-2, to advance into the championship where they beat Elkins, 10-3.

The mission is two-fold, hosting a baseball tournament for boys to enjoy, and also to raise money for the Alzheimer’s research. Next year’s tourney will be held Aug. 19-20, 2023. Area teams compete for practice sessions at the field.

“I’m really thrilled with how many people want to use the field from Farmington, Prairie Grove and Lincoln. When they come, they’ve told me they didn’t have a place to practice. Now, they don’t want to Go anywhere else. I tell them it’s first come, first serve, some wait too long and they don’t have a spot,” Perronni said.

Perronni’s thrilled the fundraising goal was met and thinks totals may exceed the $5,000 when he adds everything up from concession sales, t-shirt sales, individual donations and contributions from local businesses sponsoring banners plus vendors such as Pepsi donating all the drinks sold in the concession was standing.

Last year Perronni said he ran short on volunteers, but that wasn’t the case this time around. Several people pitched in to help run the two-day tournament and he can’t thank them enough.

“I’m so pleased that we had so many people who didn’t come last year. I’m pleased with not only the attendance but everybody’s so generous,” Perronni said.

He estimates the 2021 tournament drew between 350 to 500 spectators. Wing used a pitch counter this year to track the number of spectators. The tournament attracted 738 total people in two days split between 264 Saturday and 474 on Sunday.

It’s remarkable that we could raise $5,000 in an event where we’re not charging admission. It’s because everybody is so generous. People will be generous if you just ask them,” Perronni said.

At the conclusion of the tournament a check presentation was made to the Arkansas chapter of the Alzheimer’s Foundation.

MARK HUMPHREY ENTERPRISE-LEADER/Honoring effort, Sam Perronni, a retired federal prosecutor and attorney, hands out a runner-up medal to a member of the Elkins Elks, which finished second in the Perronni Invitational little league baseball tournament Sunday. Perronni’s wife, Pat, was diagnosed with Alzheimer’s nine years ago. She loved watching children come play baseball at the field constructed at the family home in west Fayetteville. 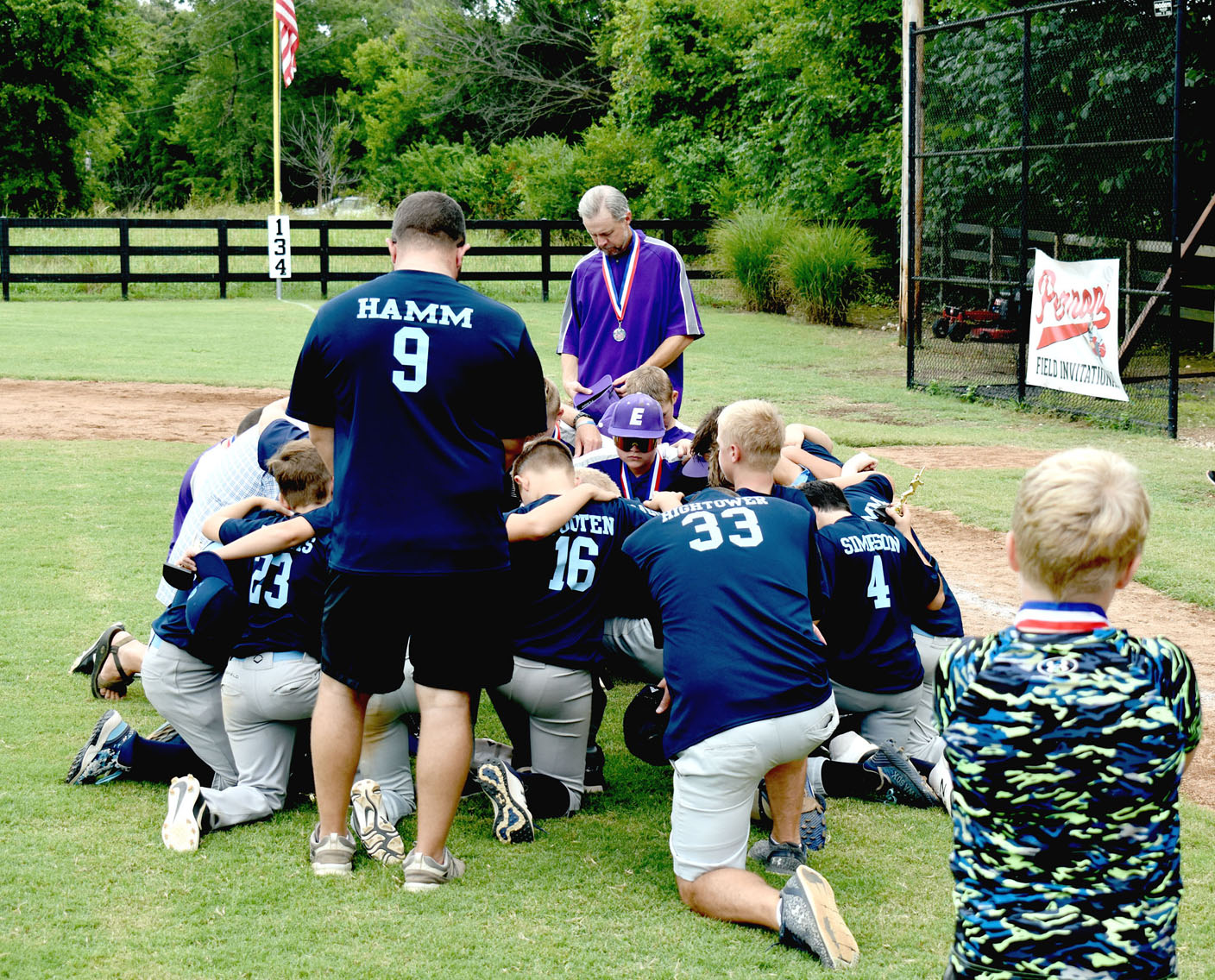 MARK HUMPHREY ENTERPRISE-LEADER/NWA Sox Huson players and coaches huddle for a team prayer exercising their First Amendment privilege after winning the Perronni Invitational, a little league baseball tournament that serves as a fundraiser for a research to cure Alzheimer’s disease. Games were played Saturday and Sunday in a picturesque setting on field built by Sam Perronni on his property in rural Fayetteville. 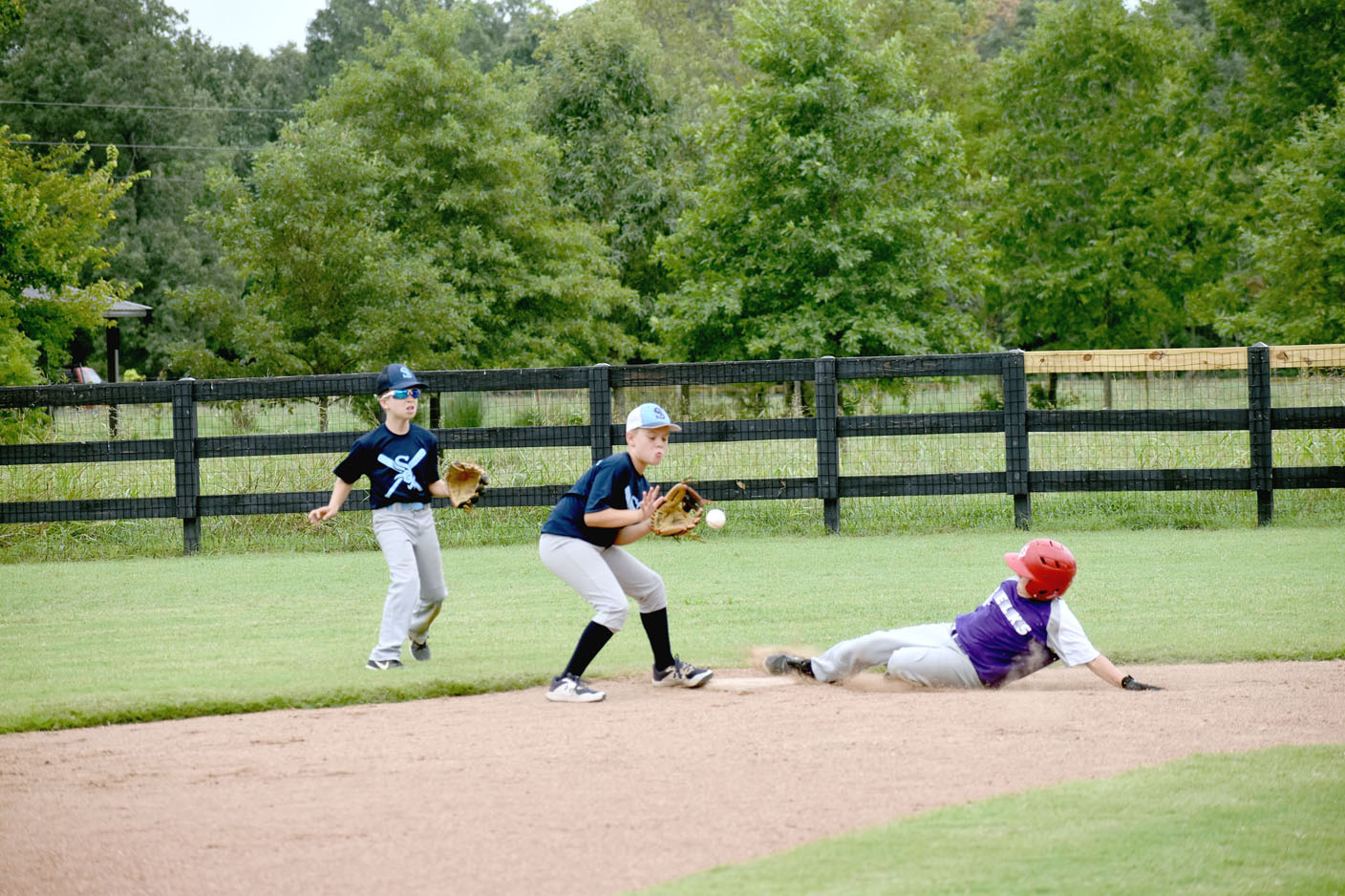 MARK HUMPHREY ENTERPRISE-LEADER/An Elkins player steals second base against NWA Sox-Huson ahead of a throw from the plate. Despite loading the bases in the fourth inning, Elkins’ rally stalled and the Sox won Sunday’s second annual Perronni Invitational little league baseball tournament, 10-3, The Sox defeated the Arkansas Legends, 4-2, and the NWA Sox-Pruitt, 10 -5, on Saturday in pool play, then beat the NWA Sox-Pruiit again Sunday, 6-2, to advance into the championship of a fundraising tournament that generated $5,000 to go towards Alzheimer’s research. 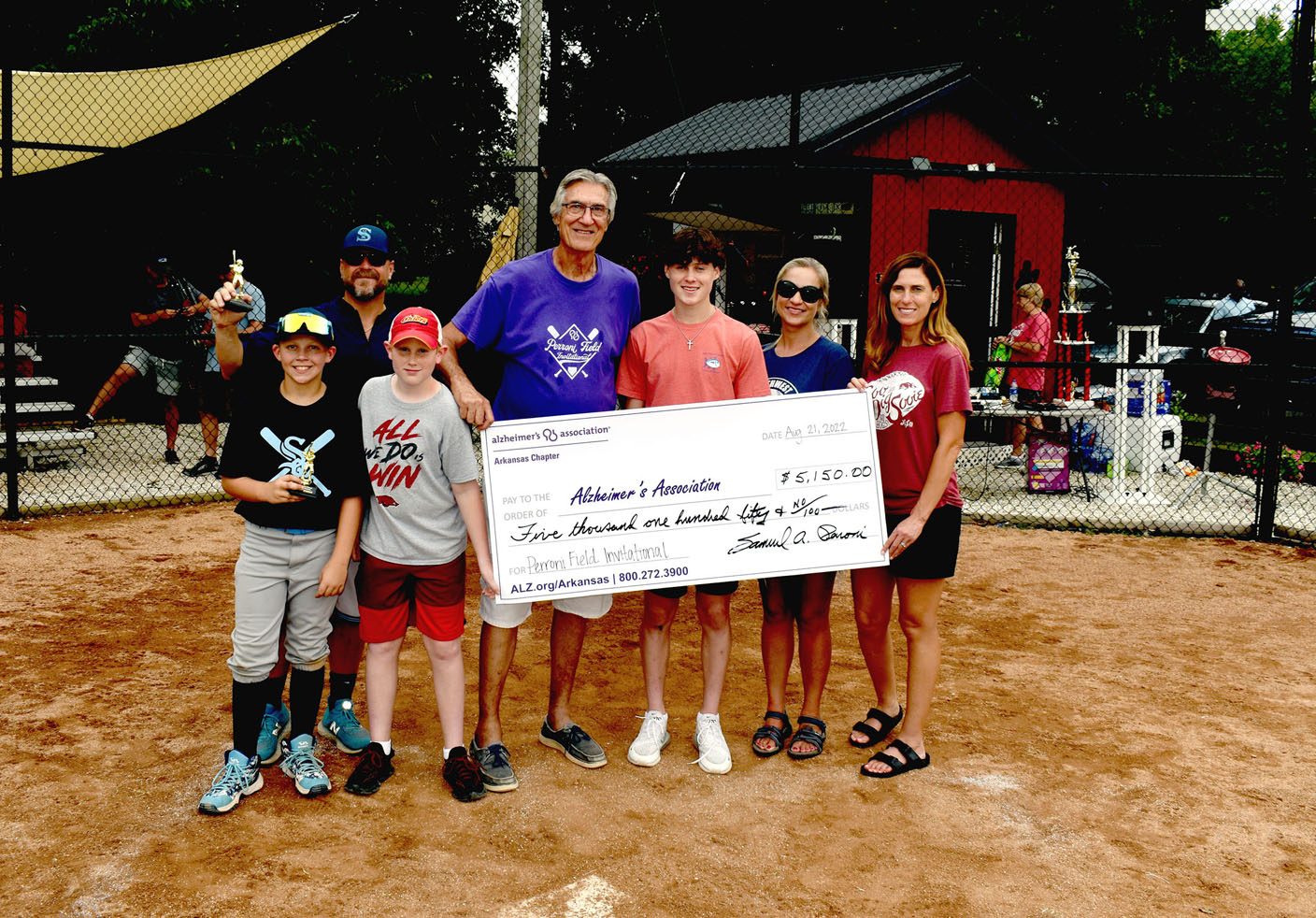 MARK HUMPHREY ENTERPRISE-LEADER/Presenting a check for $5,000 raised in a two-day little league baseball tournament at the second annual Perronni Invitational (from left): Austin Bailess, Carson Ingram, Sam Perronni, Chandler Kemp, Melanie Huson, and Beth Kemp . Admission was free and funds were raised through donations, concessions, t-shirt sales and contributions from local businesses including Pepsi which donated all the drinks. 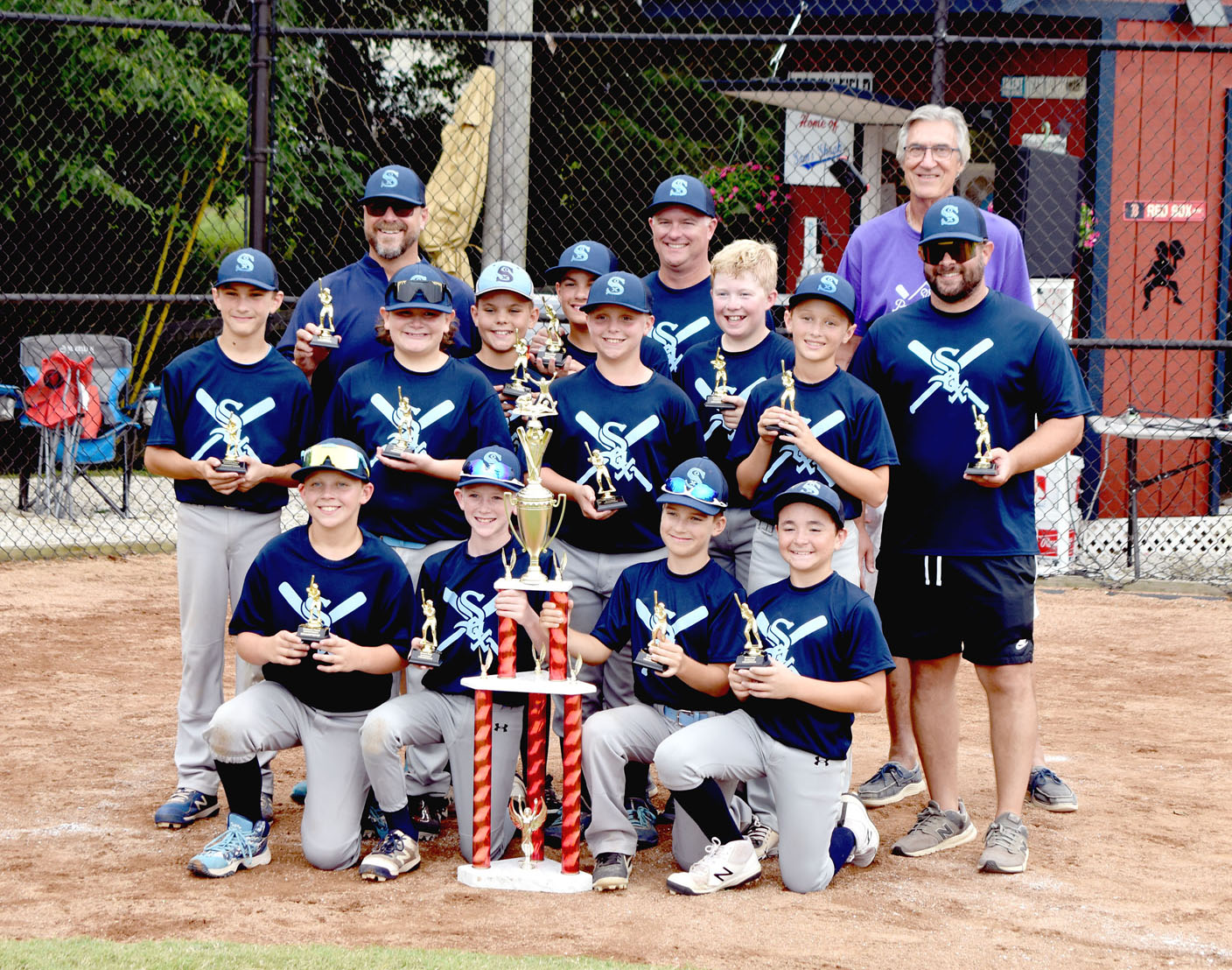