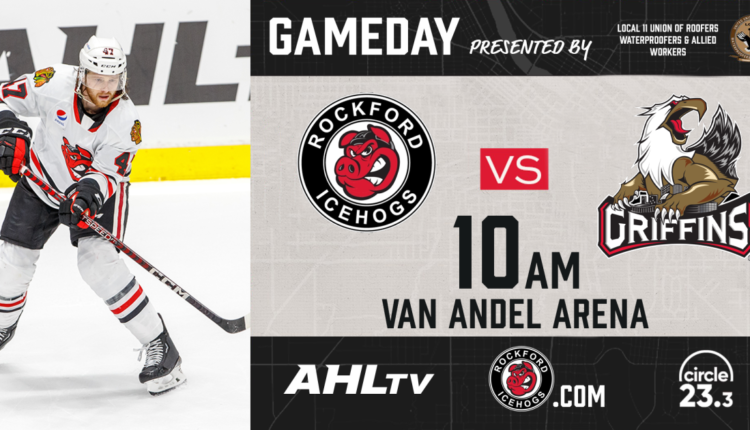 Grand Rapids, Mich. — Still on the road, the Rockford IceHogs take on the Grand Rapids Griffins today at 10 am at the Van Andel Arena in Grand Rapids, Michigan. Today’s game wraps up a three-game road trip for Rockford after the IceHogs split a pair of games in Texas over the weekend.

Players to Watch
Forward Luke Philp scored his seventh goal of the season against the Stars to tie Brett Seney other David Gust for the team lead through 11 games. defenseman Isaac Phillips tallied and notched an assist to help secure the Hog’s win on Sunday night.

Last game highlights
The IceHogs secured a 5-4 win against the Texas Stars. David Gust
tallied Rockford’s first two goals of the contest. Luke Philp scored the game-winning goal as Bobby Lynch other Isaac Phillips scored their first tallies of the season for the Hogs. Jason Stauber turned away 42 stars shots to earn his second win of the campaign.

It’s Gusty Out Here
After his fifth multipoint game of the season, David Gust (7G, 9A) was named the AHL’s First Star of the Night on Sunday in Texas. With three two-goal contests, Gust leads the Hogs this season and ranks fifth in the AHL with 16 points.

Lucky 7s
Rockford forwards David Gust, Luke Philp and Brett Seney have all tallied seven goals through 11 games so far this season. The seven tallies for the trio rank them all fourth in the AHL for goals scored in the young season. Adding in Lukas Reichel’s five goals, the four players have attributed 26 of the IceHogs 41 goals (63.4%) on the season.

Power play binge
After a slow start to the season on the man advantage (1-21, 4.8%) through their first six games, the IceHogs power play has tallied in four of the last six contests. With their power-play goal on Sunday in Texas, Rockford is now 10-33 (30.3%) over the past six games.

staying hot
Keeping their foot on the gas, the IceHogs’ offense totaled seven goals in two games, including tallies in five of their last six periods over the weekend in Texas. The IceHogs have lit the lamp four or more times in six of their last seven outings, going 4-2-0-1. When the Hogs and Griffins faced each other on Nov. 5, Rockford scored four unanswered goals in the first two periods to beat Grand Rapids 4-1.

Next home game
Join the Rockford IceHogs on Friday, November 18 at 7 pm for World Cup Kickoff Night versus the Chicago Wolves. Add $10 to your ticket to get an exclusive IceHogs USA World Cup Scarf by using code WC2022. It’s also our next $2 Beer Night! Start off the weekend with $2 Bud Light, Budweiser, and Busch Light. Get tickets now!