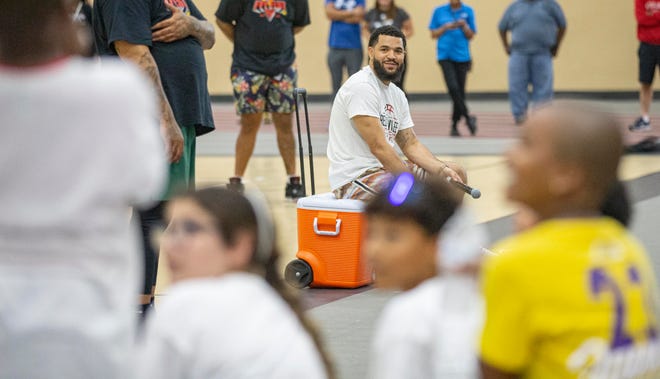 Fred VanVleet was in Rockford this month leading his annual basketball camp, inspiring kids to reach their full potential.

Apparently, the NBA all-star and Rockford Auburn grad also taught some youngsters about his wicked crossover.

Photos and video of VanVleet playfully “dropping” kids with multiple crossovers made the rounds Wednesday across the internet, with fellow NBA stars alike laughing along with the deft display.

Fred VanVleet Q&A:When the NBA all-star was scared on the court and why he made a movie

Places like Bleacher Report and The Big Lead spread the pictures and video of the Toronto Raptors guard, first shared in an Instagram post from FlyGuy Films. Check it out below.

“Why you mixing kids like that?” Los Angeles Clippers player Norman Powell replied to the video, along with three crying and laughing emojis — the preferred reaction for many who responded, including VanVleet’s former Wichita State teammate Cleanthony Early.

From the camp:How Fred VanVleet’s basketball camp inspires young Rockford athletes on and off the court

Bleacher Report said VanVleet “showed no mercy” when he faked and flabbergasted multiple kids on the court, who lunged and leaped for the ball. At least two hit the hardwood before quickly popping back up and get back on defense.

VanVleet, a 2019 NBA champion with the Raptors, was making other headlines Thursday as news surfaced of a possible contact extension that will pay him a reported $110 million over four years, according to Bleacher Report.

BIPOC Teens Learn About All Aspects Of Theater In New Workshop

KHN’s ‘What the Health?’: A World Without ‘Roe’