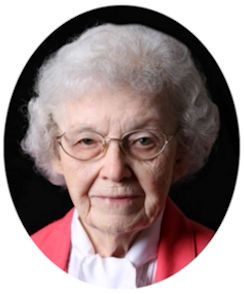 Sr. Dominica Doyle, age 97 of the Sisters of St. Francis in Oldenburg, Indiana, died July 30, 2022 at the convent. Born May 22, 1925, in Indianapolis, Indiana, she was the second of four children born to Margaret (Nee: Schwimmer) and Thomas Doyle Sr. Her father was born in Kerry, Ireland and Dominica never missed an opportunity to celebrate her Irish ancestry .

She attended Our Lady of Lourdes grade school in Indianapolis and was taught by the Oldenburg Franciscan Sisters. Sr. Ancilla Marie Zoller encouraged her to pursue her desire for a religious vocation. Dominica enrolled at the Immaculate Conception Academy and went on to enter the convent on September 8, 1942.

In 1965 Dominica was hired as principal of St. Michael’s School in Brookville, Indiana. She served there for the next 40 years, where she worked with her dear friend Sr. Helen Eckstein, both of them returning home in 2005. Upon returning to Oldenburg, Dominica ministered to her Sisters at St. Clare Hall and also volunteered in the Finance Office of Oldenburg Academy until her retirement in 2015. Later that year she was named Oldenburg Academy’s Volunteer of the Year.

When asked what she would share with someone considering religious life, she responded, “Religious life ran through the lineage in our relatives. I was an aspirant in the Academy days. For those interested in religious life today, I feel they would experience the Spirit within our midst. Our Franciscan joy is part of our heritage.”

Dominica is survived by numerous nieces, nephews, great nieces and great nephews. In addition to her parents, she is also preceded in death by her sisters Margaret Mary Doyle, Rosemary Becher and her brother Thomas Doyle Jr.

Visitation will be Friday, August 1st from 1:30 – 3 pm at the convent chapel. Funeral services follow at 3 pm with Fr. Bob Ross officiating and burial will be in the convent cemetery. For those unable to attend, services will be live-streamed at https://youtu.be/XjqVIGhvy50. Memorials may be made to the Sisters of St. Francis, PO Box 100, Oldenburg, Indiana, 47036 (www.OldenburgFranciscans.org). For online condolences go to www.weigelfh.com