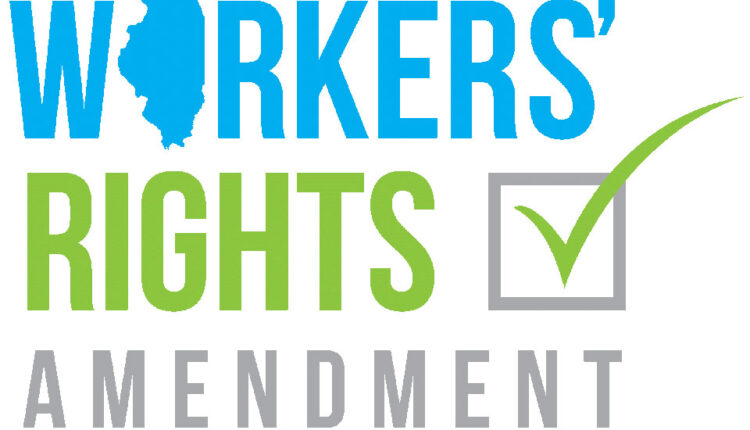 Barring a successful appeal from the right-wingers, Grischow’s ruling clears the way for Illinoisans to vote on those workers’ rights this fall.

Meanwhile, in New Mexico, state court judge Francis Mathew in Santa Fe re-emphasized the point, but about state judges upholding the US Constitution, when he threw a Trumpite invader of the US Capitol out of local office on Sept. 5. The judge openly called the Trumpites “insurrectionists.”

Judge Mathew used the US Constitution’s 14 th Amendment to remove Cowboys for Trump co-founder Cuoy Griffin from his post as Otero County Commissioner because Griffin, wielding a bullhorn, urged the Trumpite invaders into the Capitol on Jan. 6, 2021, though Griffin didn’t ‘t go inside himself.

Judge Mathew invoked what might be called the “Jeff Davis clause” of the amendment. It bars anyone inciting “insurrection or rebellion” against the US from future state or federal office if they had already violated their oath of office by doing so.

There have been other cases invoking the amendment against congressional Republicans who egged on the January 6 invaders—notably one in Georgia against extremist and conspiracy-mongering Republican Rep. Marjorie Taylor Greene. All, so far, have been unsuccessful, the Washington Post reported.

If lawmakers or judges agree, the “Jeff Davis clause” could be invoked to even more-vicious inciters, such as Sem. Jeff Hawley, R-Mo., who gave an incendiary speech to the invaders and then, as he was striding away , raised his fist in solidarity with them. Or, if lawmakers really dared, to Donald Trump.

In the Illinois case, analyst Bill Knight of The Labor Paper of Peoria reported Judge Grischow, a Republican sitting in the state capital of Springfield, ruled Illinois could spend money to list the Workers Rights Amendment, Amendment 1, on this fall’s ballot in the country ofLincoln.

If voters OK the amendment, Illinois would be one of the few states with such a guarantee in its constitution, and the only one with a “right to work” ban, too.

Specifically, the amendment “would establish a constitutional right for (Illinois) employees to organize and bargain collectively through representatives of their choice to ‘negotiate wages, hours and working conditions and to protect their economic welfare and safety at work,’” Knight wrote.

Judge Grischow tossed out that argument, too.

There are “no reasonable grounds” for keeping Amendment 1 off the fall ballot, she wrote. “Some parts of the amendment were clearly not pre-empted” by the NLRA, she added.

The right-wing center’s “arguments fail as a matter of law and impermissibly seek an advisory opinion” from the courts “as to constitutional issues which may never progress beyond the realm of the hypothetical.

“There is no basis for denying the voters the opportunity to decide whether to enact a state right to collective bargaining as a supplement or backup to rights secured by the federal NLRA.”

Judge Grischow said the proposed amendment has three purposes: (1) Creating worker rights for public workers, (2) To restrain the Illinois General Assembly from passing laws restricting union-security agreements—the right to work laws—and (3) To “ serve as a state law fail-safe should the federal government ever decide to abandon the NLRA.”

The right-wing center drew support from several groups that tried to hold the amendment in the Illinois legislature. They included the Illinois Chamber of Commerce, the Illinois Association of Manufacturers and the National Federation of Independent Business, a key cog in the nationwide corporate-financed anti-worker right-wing coalition.

And through another right-wing “think tank,” the Liberty Justice Center is allied with the National Right To Work Committee, a virulent hater of workers and unions.

That committee financed the infamous Janus case, also from Illinois. There, the US Supreme Court’s five-Justice Republican majority ruled five years ago that every single state and local government worker in the US could be a potential “free rider,” able to use union protections, services and benefits without paying one red cent for them.

Starting with a mass rally several months ago in Peoria, Illinois unions and their allies are waging an intensive campaign to get the measure into the state constitution. Now unionists are going house to house and door to door to convince the state’s voters to approve it. It needs either 60% of those voting in its own balloting or 50%+1 of the overall election turnout to win.

Judge Grischow’s ruling is a key victory in an election where experts expect billionaires will spend millions of dollars to attack workers’ rights in general and the amendment in particular, Knight wrote. The State Senate voted 49-7 for the amendment and the State House agreed, 80-30. Grischow’s ruling can be appealed upwards in Illinois courts.

As part of the campaign for voter approval of Amendment 1, The Labor Paper devoted much of its Labor Day edition to the effort, interviewing individual workers about why it’s necessary and reporting on the door-to-door campaigning in Peoria and surrounding counties.

The paper even temporarily changed its front page to put “Vote Yes Workers Rights” with a black silhouette of Illinois between “vote” and “yes,” plus a box and a checkmark, next to its masthead. The state AFL-CIO has a similar logo on its website, except the silhouette replaces the “o” in the word “vote.”

“I personally always have had a better standard of living when working a union job and (have) not been afraid to speak up to management when I’ve had safety concerns for myself and/or co-workers. All workers deserve such benefits,” Lisa Renski of Letter Carriers Local 522 in Bloomington, Ill., told The Labor Paper.

Greg Rosenak, an Electrical Workers Local 34 retiree, made the connection between protecting workers rights in Illinois and protecting the right to abortion nationally. Though justices’ names changed, the Republican-named US Supreme Court majority which ruled against unions in the Janus case also discarded the constitutional right to abortion.

“We have seen with the abortion debacle how a few well-placed zealots can forgo the will of the people to forward their own myopic agenda,” Rosenak told The Labor Paper.

“Illinois has long been a stronghold for workers’ rights, with some of the best workers’ comp, safety and unemployment laws protecting the worker,” said Rosenak, whose local covers Peoria, Galesburg and Quincy.

“One only needs to think of the last governor”—right-wing Republican Bruce Rauner, clobbered in 2018—“who tried to turn our state into a right to work state by dividing us,” he explained. “The Workers Rights Amendment solidifies workers’ rights for our children’s future and the continuance of living wage jobs in our state.”