Things to Do: See REO Speedwagon Styx and Loverboy at the Woodlands Pavilion 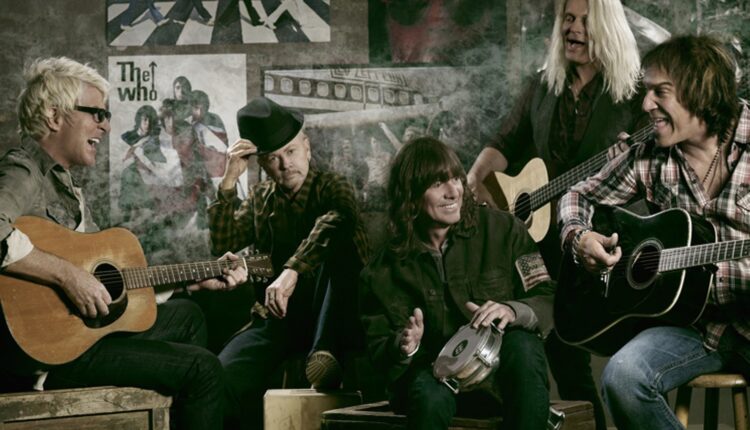 When we recently spoke with Ricky Phillips of Styx, the bass player told us that he and his fellow four-string thumpers and the current Live and Unzoomed classic rock package tour (Bruce Hall of REO Speedwagon and Ken “Spider’ Sinnaeve of Loverboy) often have a “bass hang” at group dinners.

The next day, Hall calls from a stop on the tour, and we ask him to elaborate.

“Oh, you talked to Little Ricky!” Hello laughs. “He and I also like to play golf together, so we talk about bass stuff and golf stuff. But it’s not like we’re off in a corner by ourselves. We just gravitate that way!”
However, the pair have not had much of a chance to hit buckets of balls this summer, as the band’s schedules don’t match up. After a show, the REO Speedwagon crew tends to stay in the town they just played for a bit, while the Styx boys immediately hit the road to the next town. So, Phillips has been mostly hunting for birdies and eagles with a new greens partner—Loverboy vocalist Mike Reno.

When told that the Woodlands—where the Live and Unzoomed tour will stop on July 24 at the Cynthia Woods Mitchell Pavilion—boasts a large number of golf courses, Hall’s conversation turns to a more practical matter.

“What’s the temperature like in Houston? I tried to play 13 holes yesterday and couldn’t finish—it was just too hot!”
It’s also the day after Carlos Santana unfortunately fell down on stage due to heat exhaustion and dehydration during his band’s tour with Earth, Wind and Fire (a July 16 Woodlands show is among the dates that have been postponed while Santana recovers).

“We don’t need Carlos going down! Promoters like those big outdoor places in the summer. I like playing them, but it’s too sweaty up there! And I’m sure the people in the crowd are suffering,” Hall adds. Still, he has already seen the appetite that fans have for live music and familiar tunes in an increasingly post-worst-of-COVID world.

“This year people are just wanting to get out of the house. We’ve been sold out every night. They’re so sick and tired of being stuck indoors. They just want to get out and rock. But I do wish we played more indoors in the summertime!” Hey says.

And while Kevin Cronin (singer/rhythm guitarist) is REO Speedwagon’s primary voice, Hall himself has taken the lead on several tunes in the band’s catalogue. That includes the more-than-appropriate “Back on the Road Again,” which is part of the summer setlist. The rest of the current lineup includes Neal Doughty (keyboards), Dave Amato (lead guitar) and Bryan Hitt (drums).

Of the three bands on the tour, Styx and REO Speedwagon have an especially long personal and professional history. Though both groups admit they will vie to be the answer to thousands of driving-home-from-the-show car conversations of “Who do you think was the best band of the night?” Styx and REO have alternated the closing slot on this tour.

“Sure, we think of that, and that’s a healthy thing. We all help each other to try and play our best shows. Nobody’s messing around out there, that’s for sure,” Hall offers.

“But there’s a big difference between REO and Styx. They’re fun to watch, Lawrence especially. He’s all over the place and spinning his keyboard and he’s a real showman. Kevin’s a great showman too and Dave and I run around. But we work more as a unit, and their songs are different. That’s why this package works. We’re kind of similar, but different.”

REO Speedwagon’s roots stretch all the way back to 1967 when the band was formed in Champaign, Illinois. Of the current lineup, Hall, Cronin, and Doughty were there for the group’s commercial heyday of the late ’70s/early ’80s with a string of hits like “Roll with the Changes,” “Keep on Loving You,” “Take It on the Run,” “Don’t Let Him Go,” “Can’t Fight This Feeling,” “Keep Pushin’,” “Time for Me to Fly” and “Ridin’ the Storm Out.”

In fact, during 1981, Styx and REO would battle back and forth for album and single chart positions with their Paradise Theater and Hi Infidelity albums respectively.
“With [Styx’s]Tommy, JY and Chuck, and me, Kevin, and Neal, we were around during the times of all the big records and competing for the top spots in the Billboard charts. So, we’ve lived a different live than the other guys in the [current] band,” Hall says. “And the competition wasn’t just Styx, it was all the other rock bands in the country.”

As a bass player, Bruce Hall is all too aware that it’s his instrument that often gets “lost” in a sound mix or is more difficult to discern for contribution to an overall song, especially live. Though he “fights the fight” to get the bottom end heard.

In terms of releasing new music, REO Speedwagon seems to be in the center of their tourmates’ thoughts. While Styx continues to put out new records (including a full length and an EP last year), Loverboy is more reticent, with Mike Reno believing only a small group of hardcore fans would snap something like that up. They instead release the occasional new song on their website.

“We write continuously. You don’t just stop doing that, you fall in love with the craft and the art of putting music together. And we have a recording studio in Agora Hills we go to from time to time that we’ve been at,” Hall says. “We just don’t know what to do with the songs. We don’t want to just throw something we love out there in the wind and let it blow away. And it’s expensive to put out a new record. I’m sure a lot of bands are like that.”
Hall correctly notes that current radio—both terrestrial and satellite—never play anything new by classic rock bands. “They’ll play the old stuff all day long,” he says. “Maybe that needs to be a new radio station that just plays new music by classic rock bands. Or at least a portion of the day. It’s such a different environment now.”

Finally, asked about any memories or connections to Houston, Hall says that he had an aunt and uncle living here (his aunt has since passed away) and one of his best friends growing up relocated to the Bayou City. Maybe they’ll get together this month for a round of golf in the Woodlands. If it’s not too hot, that is.

Given how the Houston summer has gone so far, though, it looks like Hall won’t even have to unpack his golf clubs from the tour bus.

Rural Hospital Rescue Program Is Met With Skepticism From Administrators