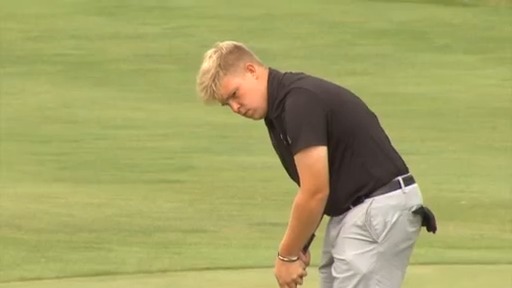 TJ Baker took a one stroke lead into the final round. At one point on the front nine, there were five golfers within two strokes of each other at the top of the leaderboard.

Baker opened up some breathing room with an eagle of the seven and a birdie on eight. He dropped another birdie putt on the tenth hole.

But former Guilford golfer Cody Rhymer got hot with birdies on 11 and 12.

On the par three 13th hole, Baker drove his tee shot near the water leaving him with a difficult lie. Hey bogeyed the hole. leaving Rhymer only one stroke back.

On the 16th, Rhymer came through with his fourth birdie on the back nine, so the two men were tied through 16.

Both golfers bogeyed 17, so it came down to the 18th hole. Rhymer pulled his tee shot into the water left of the fairway. Hey bogeyed the hole.

Baker seized the moment. He finished on a high note with a birdie.

Baker shot a 68 to finish the tournament ten-under par. That was two strokes better than Rhymer and four better than Danny Gorman.

“I’ve been playing this sport long enough to realize it’s not always going to go my way, so to bounce back from those bogies with a couple birdies really felt good, because Cody was pressing me all day,” said Baker. “He just kept raking in the putts, and I just had to get it done some way, and I did it.”

Baker will be right back on the golf course Monday. He’ll be competing in the Illinois Open at White Eagle Golf Club in Naperville, Ill.

From the Farm: Sweet corn research